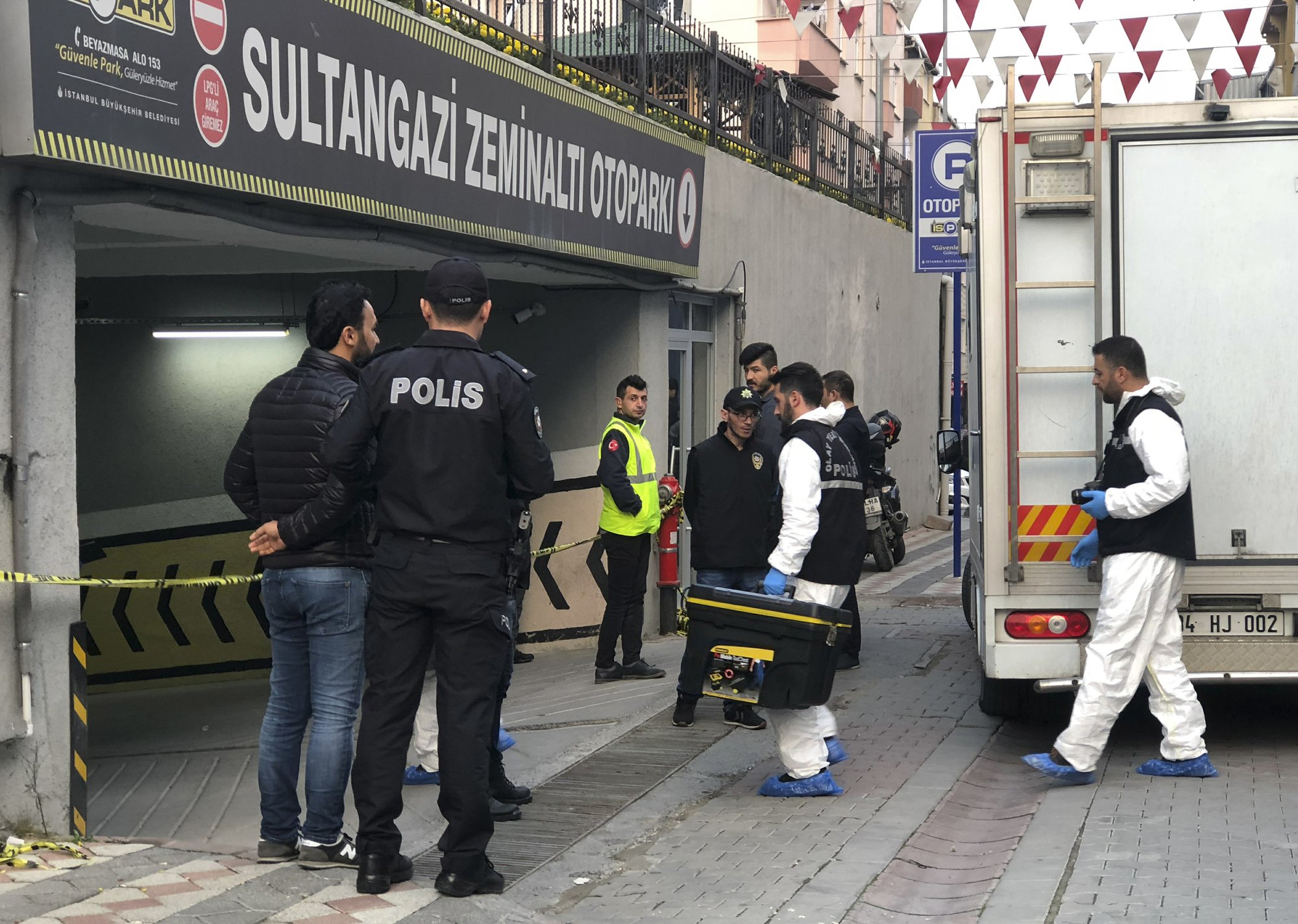 Turkish crime scene investigators at the entrance of a car park where authorities earlier foound a car belonging to the Saudi consulate. (Photo: AP)

Just hours after writer Jamal Khashoggi was killed in the Saudi Consulate in Istanbul, a man strolled out of the diplomatic post apparently wearing the columnist’s clothes as part of a macabre deception to sow confusion over his fate, according to surveillance video leaked Monday.

The new video broadcast by CNN, as well as a pro-government Turkish newspaper’s report that a member of Saudi Crown Prince Mohammed bin Salman’s entourage made four calls to the royal’s office from the consulate around the same time, put ever-increasing pressure on the kingdom. Meanwhile, Turkish crime-scene investigators swarmed a garage Monday night in Istanbul where a Saudi consular vehicle had been parked.

All this came on the eve of Prince Mohammed’s high-profile investment summit in Riyadh, which has seen a raft of the world’s top business leaders decline to attend over the slaying of the writer for The Washington Post. Turkish President Recep Tayyip Erdogan also has promised that details of Khashoggi’s killing “will be revealed in all its nakedness” in an address he’ll make before parliament around the same time Tuesday.

“We are faced with a situation in which it was a brutally planned (killing) and efforts were made to cover it up,” said Omer Celik, a spokesman for Turkey’s ruling Justice and Development Party. “God willing, the results will be brought into the open, those responsible will be punished and no one will dare think of carrying out such a thing again.”

The kingdom’s announcement Saturday that Khashoggi died in a “fistfight” was met with international skepticism and allegations of a cover-up to absolve the 33-year-old crown prince of direct responsibility.

Turkish media reports and officials maintain that a 15-member Saudi team flew to Istanbul on Oct. 2, knowing Khashoggi would enter the consulate to get a document he needed to get married. Once he was inside, the Saudis accosted Khashoggi, cut off his fingers, killed and dismembered the 59-year-old writer, according to Turkish media reports.

Surveillance video on CNN showed the man in Khashoggi’s dress shirt, suit jacket and pants, although he wore a different pair of shoes. It cited a Turkish official as describing the man as a “body double” and a member of the Saudi team sent to Istanbul to target the writer. The man walks out of the consulate via its back exit with an accomplice, then takes a taxi to Istanbul’s famed Blue Mosque, where he goes to a public bathroom, changes back out of the clothes and leaves. He later eats dinner with his accomplice and goes back to a hotel, where footage shows him smiling and laughing.

The state-run broadcaster TRT later also reported that a man who entered the consulate was seen leaving the building in Khashoggi’s clothes.

In the days after Khashoggi vanished, Saudi officials initially said he had left the consulate by its back door. Saudi Ambassador to the US Prince Khalid bin Salman, a brother of the crown prince, wrote Oct. 8 that Khashoggi had left, and that claims the kingdom “have detained him or killed him are absolutely false, and baseless.”

The fact that the Saudi team would allegedly have a man walking around in Khashoggi’s clothes would suggest a premeditated plot to kill the writer.

A separate report Monday by newspaper Yeni Safak said Maher Abdulaziz Mutreb, a member of Prince Mohammed’s entourage seen on trips to the U.S., France and Spain this year, made the calls from the consulate. The newspaper said the four calls went to Bader al-Asaker, the head of Prince Mohammed’s office. It said another call went to the United States.

Yeni Safak cited no source for the information. However, pro-government newspapers have been leaking information about Khashoggi’s killing, apparently with the help of Turkish security forces. Yeni Safak reported last week that Saudi officials cut off Khashoggi’s fingers and then decapitated him at the consulate as his fiancée waited outside.

Officials in Saudi Arabia have not answered repeated requests for comment from The Associated Press in recent days, including on Monday. Saudi Arabia so far has not acknowledged or explained Mutreb’s presence in Istanbul or the presence of a forensics and autopsy expert at the consulate before Khashoggi arrived.

Last week, a leaked photo apparently taken from surveillance footage showed Mutreb at the consulate, just ahead of Khashoggi’s arrival. Mutreb’s name also matches that of a first secretary who once served as a diplomat at the Saudi Embassy in London, according to a 2007 list compiled by the British Foreign Office.

By nightfall, Turkish police began searching an underground car parking garage in Istanbul’s Sultangazi district. Surveillance footage on TRT showed what Turkish security officials described as suspicious actions, including an image of a man moving a bag from one vehicle to another.

Meanwhile, Saudi state media reported that both Prince Mohammed and King Salman made calls to Khashoggi’s son, Salah, early Monday. Statements from the agency said both the king and the crown prince expressed their condolences for Khashoggi’s death.

A Saudi friend of Khashoggi who was in frequent touch with him before his death told the AP that Salah Khashoggi had been under a travel ban and barred from leaving the kingdom since last year as a result of his father’s criticism of the government. The friend spoke on condition of anonymity for fear of repercussion. The Saudi statements did not acknowledge the ban.

Five Turkish employees of the consulate also gave testimony to prosecutors Monday, Turkish media reported. Istanbul’s chief prosecutor had summoned 28 more staff members of the Saudi Consulate, including Turkish citizens and foreign nationals, to give testimony. Some Turkish employees reportedly said they were instructed not to go to work around the time that Khashoggi disappeared.