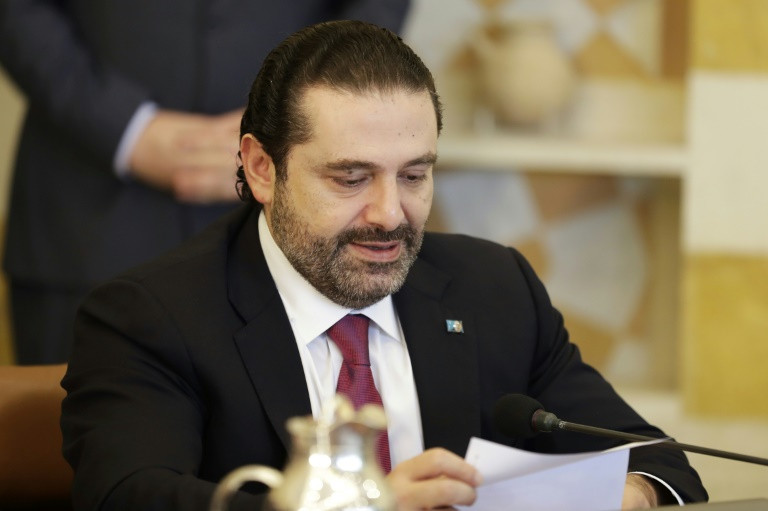 French President Emmanuel Macron led calls Friday for countries to stop meddling in Lebanon at an international meeting aimed at preventing the fragile nation becoming a pawn in the power struggle between Saudi Arabia and Iran.

US Secretary of State Rex Tillerson attended the eight-nation talks in Paris with Lebanese Prime Minister Saad Hariri, whose shock resignation last month -- which he has since withdrawn -- sparked fears of a new Middle East crisis.

The five permanent members of the UN Security Council, along with Germany, Italy and Egypt, sent representatives to Paris to show support for Lebanon.

Hariri's surprise resignation announcement from Riyadh last month sent tremors through Lebanon, with many suspecting the Saudis of forcing him out to trigger a showdown with the pro-Iranian Lebanese militia Hezbollah.

Opening the meeting, Macron said it was "essential that all of the parties in Lebanon and regional actors respect the cardinal principle of non-interference" in other countries.

Speaking afterwards, Tillerson urged US ally Saudi Arabia to be "more measured" in its dealings with its neighbours, including Lebanon.

Citing the Saudi blockade of Qatar, its bombing campaign in Yemen and Lebanon, he said: "We would encourage them to be a bit more measured, a bit more thoughtful, in those actions, to fully consider the consequences."

The talks on Lebanon came as the region was roiled by a new crisis, with US President Donald Trump's decision to recognise the disputed city of Jerusalem as Israel's capital sparking a "day of rage" by Palestinians.

Hariri and Macron both emphasised their opposition to Trump's announcement, which will eventually involve moving the American embassy in Israel to Jerusalem from Tel Aviv.

"It complicates the peace process even more (between Israel and the Palestinians) and creates a new challenge to regional security," Hariri said.

Macron added: "None of the region's problems will be resolved by unilateral decisions or the strongest imposing their will."

Saudi Arabia, a Sunni Muslim country, accuses Iran of using armed proxies such as Hezbollah to advance its interests, from Lebanon to Yemen, Syria and Iraq.

In his resignation statement Hariri accused Tehran and Hezbollah -- which has ministers in the Lebanese government -- of destabilising the country and region.

But he eventually returned home and agreed to stay on as premier after securing an agreement from Hezbollah that Lebanon should keep out of regional conflicts.

Hariri remained in Riyadh for two weeks after his resignation, fuelling speculation that he was being held hostage.

A Lebanese source close to the premier told AFP that Riyadh threatened Lebanon with economic sanctions unless he stepped down.

Macron intervened, hosting Hariri to Paris for talks, after which he returned home to a hero's welcome.

"Lebanon's stability is not only crucial for its inhabitants but for the entire region," Macron said, praising the small multifaith country as a model of pluralism in the Middle East.

Hariri said the fragile stability in his country "appeared like a small miracle" given the wars in Syria, Iraq and Yemen.

"The desire of all in Lebanon is to save our democracy," he said.

Friday's meeting ended with plans for three follow-up conferences: one in Paris on boosting investment in Lebanon; another in Rome on building up Lebanon's army; and a third in Brussels on helping Lebanon cope with the strain of sheltering 1.5 million Syrian refugees.

Riyadh's power play in Lebanon backfired, with the various Lebanese factions coming together this week to avoid a political breakdown.

"Lebanon will respect this principle of keeping its distance (from trouble beyond its borders). You will see," Hariri vowed Friday.

At a press conference with Tillerson, French Foreign Minister Jean-Yves Le Drian said the principle "applied to all, both inside and outside (Lebanon)."