BEIRUT, Jan. 18 (Xinhua) -- Lebanese hold different views about the results of the nationwide protests against injustice and corruption which started three months ago. 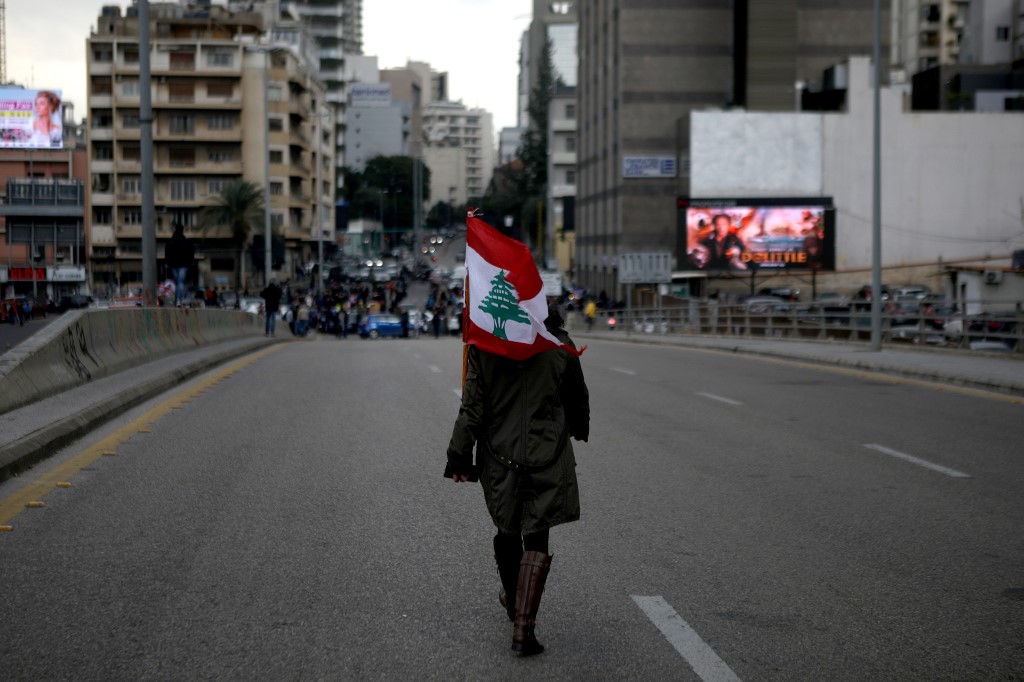 A woman carrying a national flag walks toward Lebanese demonstrators blocking the main bridge linking the western and eastern sides of the capital Beirut. (File photo by AFP)

Ali Beydoun, an activist, told Xinhua that the protests succeeded in reducing sectarianism in the country.

"People have realized that, regardless of their sects, they are all facing the same misery of living in a corrupt system that is incapable of offering them a decent life," he said.

Beydoun stressed that the protests led to the resignation of former Prime Minister Saad Hariri, cancelling a meeting for the members of the parliament aimed at passing the general amnesty law, in addition to reducing corruption to a certain extent.

"I believe that officials will have to think twice before engaging in any corruptive activity now," he said.

Anis Ghalayini, a bank employee, believes that the protests were "necessary" because Lebanese people have been long deprived of their basic needs such as electricity, water and jobs.

Ghalayini believes that the positive results of the protests till now are limited since major changes do not happen overnight.

"However, the resignation of the cabinet was a good start. Also, opening corruption files for many politicians is another good step and attempts to form an independent government are positive," he said.

However, Jack Yacoub, a Lebanese engineer, believes that the protests are meaningless and people had a golden opportunity to make political change through parliamentary elections in 2018 but they failed to do it.

"The protests are not organized and political parties intervened and ruined them. I do not have any hope for change because the whole system should be changed to be able to get rid of the current ruling class," he said.

Afife Diab, a Lebanese expatriate, said that the protests contributed to accelerating the financial and economic deterioration while they did not succeed in achieving any concrete results so far.

"Protesters should also have a united vision," she said.

Lebanon's nationwide protests were caused in the first place by the old cabinet's attempts to impose more taxes on citizens to increase the treasury's revenues instead of implementing serious structural reforms to save the deteriorating economy.

Ibrahim Halawi, lecturer in Middle East Politics at Royal Holloway, University of London, told Xinhua that "the protests need to mature greatly, in its organization and discourse, to be able to present to the public a viable and tangible alternative that would be voted into the government in the next parliamentary election, when and if it takes place."

Political Analyst Antoine Costantine believes that the protests did not come up with a clear political agenda.

"It failed to turn demands into a political program or strategy. Also, protesters do not all agree on the same demands, and they have lately focused their anger on the banking system," he said.