In bankrupt Lebanon, Khalil Mansour has to queue for hours every day just to buy bread for his family and some days he can't afford any. 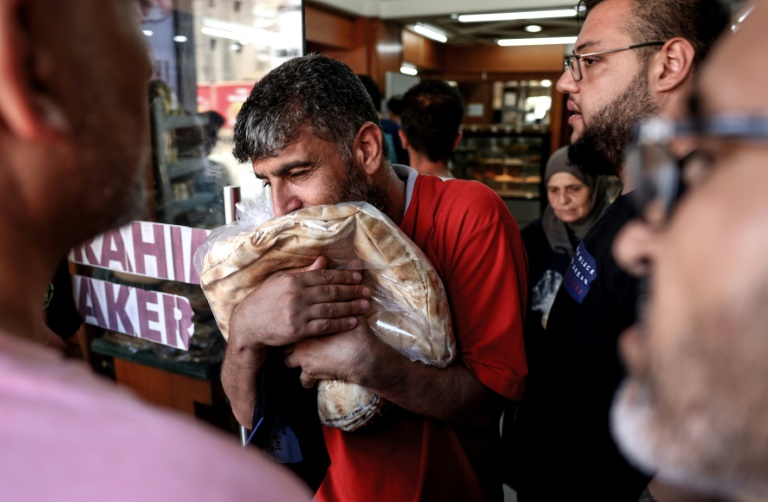 A customer clutches a bag of subsidised flatbread after finally reaching the front of the queue at a a bakery in the Lebanese capital Beirut. (Photo:AFP)

In a country which once boasted the nickname "Switzerland of the Middle East" for its thriving banking sector before financial crisis hit in 2019, the chronic shortage of the staple of the Lebanese diet has been hard to take.

Lebanon defaulted on its national debt in 2020 and its currency has lost around 90 percent of its black market value.

The World Bank has branded the financial crisis one of the worst since the 19th century while the United Nations now considers four out five Lebanese to be living under the poverty line.

Faced with demands from international creditors for painful reforms in return for the release of new aid, the embattled government has been forced to end subsidies on most essential goods -- although not so far on wheat.

The price of subsidised bread has gone up, although by less than if there were no subsidy, but bakeries have started rationing the staple.

A bag of flat Arabic pitta-like bread now officially sells for 13,000 Lebanese pounds (43 US cents). On the black market it costs more than 30,000.

"Last week I went without bread for three days because I cannot afford to pay 30,000," said Mansour, 48.

For Mansour and most Lebanese, buying bread means standing for hours in long queues outside bakeries and sometimes, when their turn comes, the bakeries have run out of bread.

"Today I queued for three hours, yesterday two-and-a-half. What next?" Mansour said on Friday outside a Beirut bakery.

"I have to feed my family. What else can I do?" asked Mansour, who earns the equivalent of $50 a month working in a pastry shop.

Most bakeries limit the sale of bread to one or two bags per customer, and each bag contains six flatbreads.

Subsidised bread is often bought in large quantities and sold again on the black market by unscrupulous dealers.

"The queues have become worse over the past two weeks," said bakery owner Mohammed Mehdi. "We are facing huge shortages."

The 49-year-old said the bakery business had become like the "Wild West". "Some customers come armed with guns and knives," he complained.

Lebanese media carry frequent reports of fights breaking out at bakeries, and even shots fired by customers demanding more bread.

In Taalbaya, in eastern Lebanon, a customer stormed a bakery on Tuesday furious he could not buy more bread, one report said.

The client shoved an employee then ransacked the bakery, forcing the army to intervene, it added.

"What is happening is an insult... and it is even more difficult than the petrol shortage" that gripped Lebanon last year, Mehdi said.

Lebanon imports 80 percent of its wheat from war-torn Ukraine, according to industry figures.

But the country's capacity to store wheat took a heavy blow when a deadly blast at Beirut port in August 2020 severely damaged the country's main grain silos.

The government and bakeries have traded blame for the bread shortage.

The economy ministry denies the claim and has accused bakeries of hoarding subsidised flour to use in unsubsidised products such as sweets.

Authorities also claim that the presence in Lebanon of more than one million refugees from war-torn Syria is partly to blame for Lebanon's economic collapse.

Some Lebanese have even gone as far as accusing Syrian refugees of buying subsidised bread to sell on the black market, fuelling resentment against the refugees and demands for them to go home.

There have been reports of some bakeries imposing separate queues for Lebanese and Syrians.

This has prompted the UN refugee agency to voice its concern.

"Lebanon is witnessing an increase in tensions and incitement between different communities, leading to localised violence in the streets, including against refugees," the UNHCR warned on Friday.