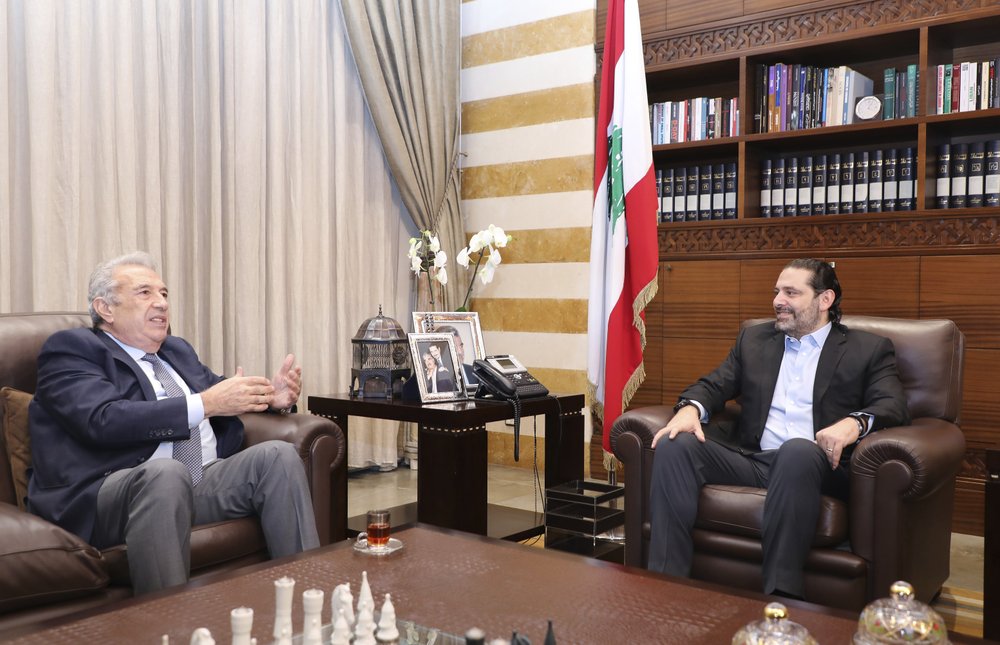 Lebanon's outgoing Prime Minister Saad Hariri, right, meets with Samir Khatib, the head of a major contracting and construction and once considered a favorite candidate for the post of Prime Minister, in Beirut, Lebanon, Dec. 8, 2019. (Photo: AP)

A mob in Lebanon attacked the office of a Sunni Muslim religious leader in the northern city of Tripoli, smashing in windows early Wednesday, Lebanon’s official news agency and the military said. The assailants then moved to one of the city’s main squares and set fire to the traditional Christmas tree.

The violence indicated that tensions that recently gripped the Lebanese capital, Beirut, fueled by an online video deemed offensive to the country’s Shiite Muslims are spreading to Tripoli, the country’s second-largest city. The city is predominantly Sunni.

The military said a mob of men on motorcycles gathered outside the home of Sunni Mufti Sheik Malek al-Shaar and rioted, “used profanity” and smashed property. The mob then moved to the square and threw fire bombs at the Christmas tree, setting it on fire. The military said it arrested four men and confiscated their motorcycles.

On Tuesday, anger boiled over in Beirut after the offensive video was widely circulated online. It showed a Sunni resident of Tripoli railing against the leaders of the country’s two main Shiite groups, Hezbollah and Amal, and religious Shiite figures and using expletives. Their supporters descended on a protest camp in Beirut as security forces intervened to push them back, setting off hours of pitched street battles.

Angry assailants also attacked protest camps in the northern district Hermel and in the southern Sidon and Nabatiyeh on Tuesday.

The violence threatened to plunge Lebanon further into chaos and ignite sectarian strife amid two months of anti-government protests and a spiraling financial crisis.

The daily An-Nahar said the assailants in Tripoli were angered because the Sunni mufti, al-Shaar, had called the powerful Shiite parliament speaker and head of Amal, Nabih Berri, to apologize for the video.

Supporters of the militant Hezbollah group and its close ally, the Amal movement, have been intolerant of the protesters’ criticism of their leaders and have tried for days, even before the video emerged, to attack the protest camps. On Wednesday, security forces set up concrete barriers at entrances to Beirut’s Riad Solh Square, a main protest site repeatedly attacked by supporters of the two groups.

The anti-government protests, which erupted in mid-October, have spared no Lebanese politician, accusing the ruling elite of corruption and mismanagement, and calling for a government of independents. They have largely been peaceful, sparked by an intensifying economic crisis.

Berri, the parliament speaker, and outgoing Prime Minister Saad Hariri met on Tuesday and urged the Lebanese not to be “drawn toward strife” and adding that some parties they didn’t name are working to incite violence in the country.