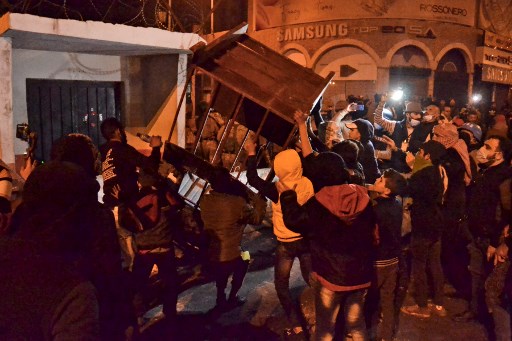 Lebanese anti-government protesters carry a security booth amid clashes with the army in the northern port city of Tripoli on January 26, 2021, as anger grows over a total lockdown aimed at stemming an unprecedented spike in coronavirus cases. (Photo: AFP)

BEIRUT, Jan. 27 (Xinhua) -- Lebanese caretaker Prime Minister Hassan Diab urged on Wednesday the Lebanese people to stop destroying public properties and attacking the Lebanese army during their protests against the total lockdown and political deadlock in the country, the National News Agency reported.

"The government is neither formed nor disrupted by burning tires, blocking roads, attacking state institutions, and targeting internal security forces and the Lebanese army," Diab said during a meeting for the ministerial committee in charge of the vaccination campaign in Lebanon.

Several demonstrations were witnessed all over the country in the past few days, namely in Tripoli, Lebanon's largest northern city, in protest against the total lockdown.

Tuesday's protests in Tripoli led to the injury of 76 people and the arrest of five people.

Diab noted that the pandemic is spreading rapidly and the total lockdown has helped in avoiding a national disaster in absence of sufficient hospital beds for infected people.

The prime minister said that the Lebanese army has started a second round of distributing 266 U.S. dollars to 250,000 families to reduce the suffering of citizens amid the lockdown.