Lebanon asks world's help 'trying to rise from its rubble'

Facing an economic meltdown and other crises, Lebanon's president on Wednesday asked for the world's help to rebuild the capital's main port and neighborhoods that were blown away in last month's catastrophic explosion. 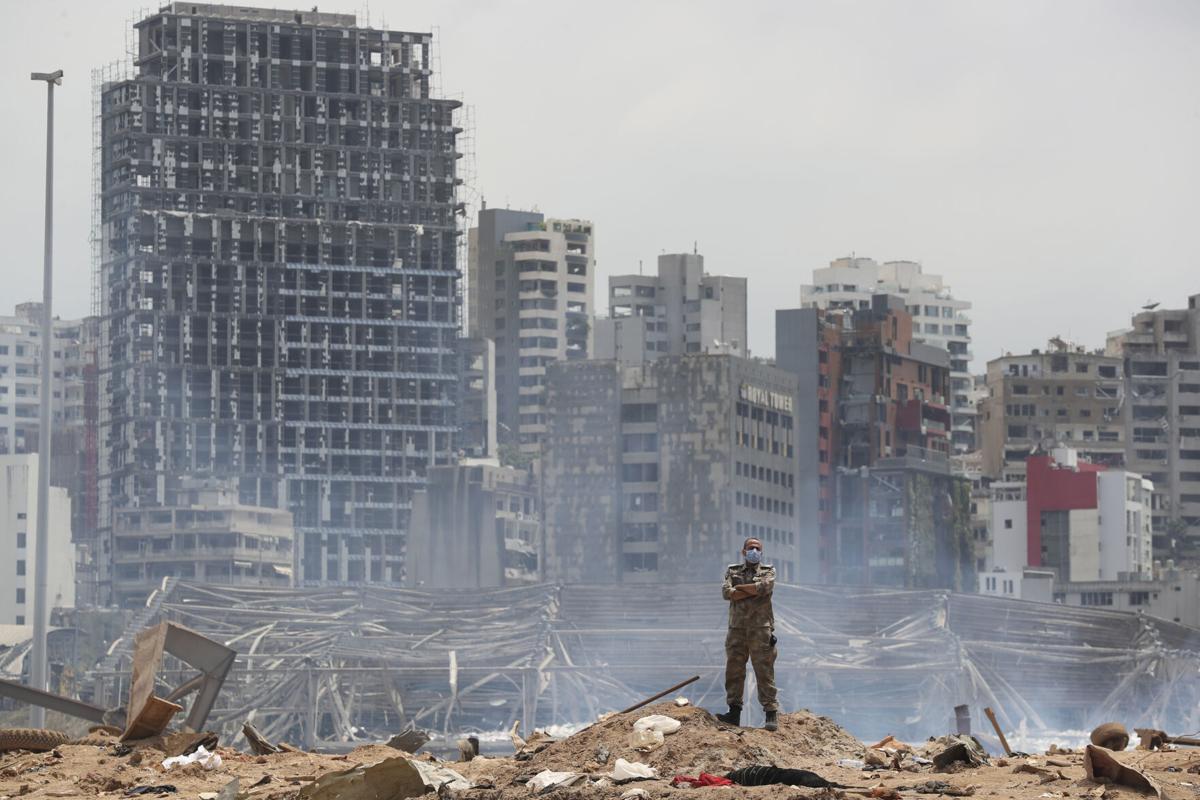 In this Aug. 6, 2020, file photo, a soldier stands at the devastated site of the explosion in the port of Beirut, Lebanon. (Photo: AP)

President Michel Aoun made the plea in a prerecorded speech to the U.N. General Assembly's virtual summit, telling world leaders that Lebanon's many challenges are posing an unprecedented threat to its very existence.

Most urgently, the country needs the international community's support to rebuild its economy and its destroyed port. Aoun suggested breaking up the damaged parts of the city into separate areas and so that countries that wish to help can each commit to rebuilding one.

"Beirut today is trying to rise from its rubble, and it is with the solidarity of all the Lebanese and your support that it will heal its wounds and rise as it has previously risen repeatedly throughout history," Aoun said. "There is a great need for the international community to support the reconstruction of destroyed neighborhoods and facilities."

The massive Aug. 4 explosion happened when about 3,000 tons of ammonium nitrates — which had been rotting in a port warehouse for more than six years — ignited. Nearly 200 people were killed, 6,500 injured and a quarter of a million people were left with homes that were not fit to live in.

The cause of the blaze that ignited the chemicals still isn't known, but the explosion is widely seen as the culmination of decades of corruption and mismanagement by Lebanon's ruling class.

It came on top of an unprecedented economic crisis which has seen the local currency lose up to 80 percent of its value and decimated people's savings, feeding despair among a population that has long ago given up on its leaders. Poverty and unemployment are soaring, made worse by the coronavirus pandemic.

A local investigation into the blast is underway, but no one has been held accountable so far.

Aroun said Lebanon had requested technical assistance from certain countries, particularly soil samples and satellite images from the moment of the explosion.

"Teams from several countries came for technical assistance and to carry out the necessary research and we are still waiting for their information... as well as the satellite images to clear the ambiguity in this part of the investigation," he added.

Earlier Wednesday, U.N. Secretary-General Antonio Guterres called for swift formation of a government to be followed by tangible steps to implement economic, social and political reforms.

Lebanon's government resigned under pressure in the wake of the port explosion, and Prime Minister-designate Mustapha Adib has been unable to form a new government amid a political impasse over which faction gets to have the Finance Ministry, as well as other disputes.

Guterres said the disastrous port explosion "must be a wake-up call."

"Without such action, the country's ability to recover and rebuild will be jeopardized, adding to the turmoil and hardship of the Lebanese people," Guterres added.

Guterres made his remarks during a meeting of the International Support Group for Lebanon held on the sidelines of the U.N. General Assembly meetings.