Lebanon’s caretaker prime minister said Monday the country has entered a “very critical zone” in the battle against the coronavirus as his government mulls tightening the nationwide lockdown announced last week. 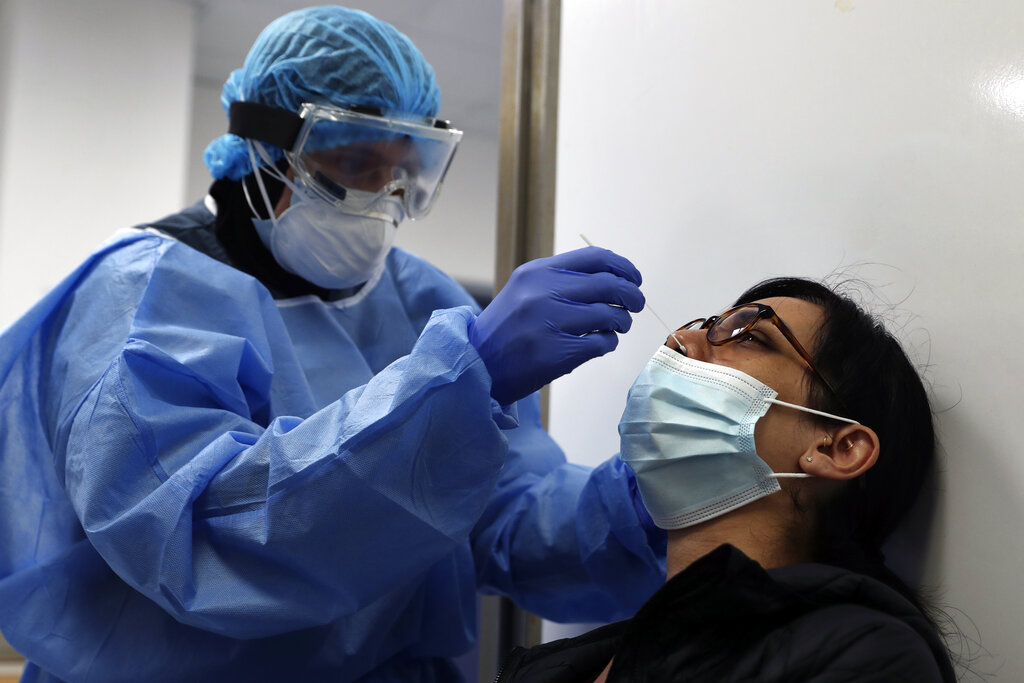 A nurse in protective clothing takes a swab from American Josephine Sandoval at a coronavirus testing center at the Rafik Hariri University Hospital in Beirut, Lebanon, Monday, Jan. 11, 2021. (Photo: AP)

Following a new post-holiday surge in infections, the Lebanese government imposed a nationwide lockdown and a nighttime curfew. But many were critical of the measures, calling them lax for exempting many sectors, such as factories, plant nurseries and exchange bureaus.

Lebanon's handling of the virus surge amid a deepening economic crisis has been under scrutiny, with many saying hesitant policies have failed to contain it.

Despite a rise in infections, the government relaxed restrictions ahead of Christmas and New Year’s celebrations, hoping to boost a crumbling local economy. Bars and nightclubs, which had been ordered shut for months, were allowed to open.

Penalties against big holiday gatherings and parties were not evenly and strictly imposed. On Sunday, a soccer match was allowed to take place in the northern Tripoli province with an audience.

Doctors and experts say the extent of the spread has yet to be felt, predicting numbers will skyrocket in the coming days, overwhelming health facilities in the country of nearly 6 million. Daily infection rates have hovered above 3,000, hitting an all-time high of over 5,000 last week.

Lawmakers and officials have called on the government to consider a 24-hour lockdown without exemptions. There have been calls for the Beirut airport to be shut. Some 80,000 Lebanese expats had returned to the country during the holidays, but doctors say the transmission remains mainly among non-expats.

On Monday, panic buyers swarmed supermarkets after reports the government planned to also order them shut in the tightened lockdown. Long lines formed outside chain supermarkets, sparking fear the crowds could further spread the virus.

Ahead of a ministerial meeting to consider new measures, Caretaker Prime Minister Hassan Diab blamed careless behavior for the spread, saying many Lebanese still consider the virus a hoax and are not taking it seriously.

“We have entered a very critical zone in terms of the coronavirus spread or at a minimum, we are at the gates of that zone,” Diab said.

Last Friday, the World Health Organization said 76% of hospital beds were occupied while the ICU bed occupancy had reached 88%, with the highest in Beirut. Some 2,291 health care workers had been infected by Jan. 8, up from 2,015 three days earlier.

Kayssar Mawad, director of a private hospital in Zgharta in northern Lebanon, said he has been turning cases away because there were no more beds. Out of 35 patients there with COVID-19, the illness caused by the virus, seven are in ICU, he said. The region is one of the country's hotspots.

“It is a difficult period,” said Mawad. “We are refusing many cases. There are no places, no more respirators.”

Since February, Lebanon has recorded more than 219,000 infections and 1,606 deaths. Hospitals have appealed to the government to turn all health facilities into treating coronavirus patients, saying all 15,000 hospital beds are needed to meet the new surge.

At the largest public hospital in Beirut, the Rafik Hariri University hospital, doctors and nurses were overwhelmed with new patients and all the 40 ICU beds were fully occupied. “We are in the heart of the crisis,” said nurse Therese Gobar.

Jad Chaaban, a Lebanese economist and political activist, tweeted that Lebanon “is dying” and called it “another chapter" of the “criminal incompetence” of the authorities.

Lebanon's political class was facing a wave of antigovernment protests before the virus outbreak. The protesters blamed the long-serving political elite for mismanaging. Then, a massive explosion last August in Beirut's port killed over 200 people and injured thousands. The blast, caused by the ignition of explosive chemicals stored there for years, has been blamed on gross negligence.