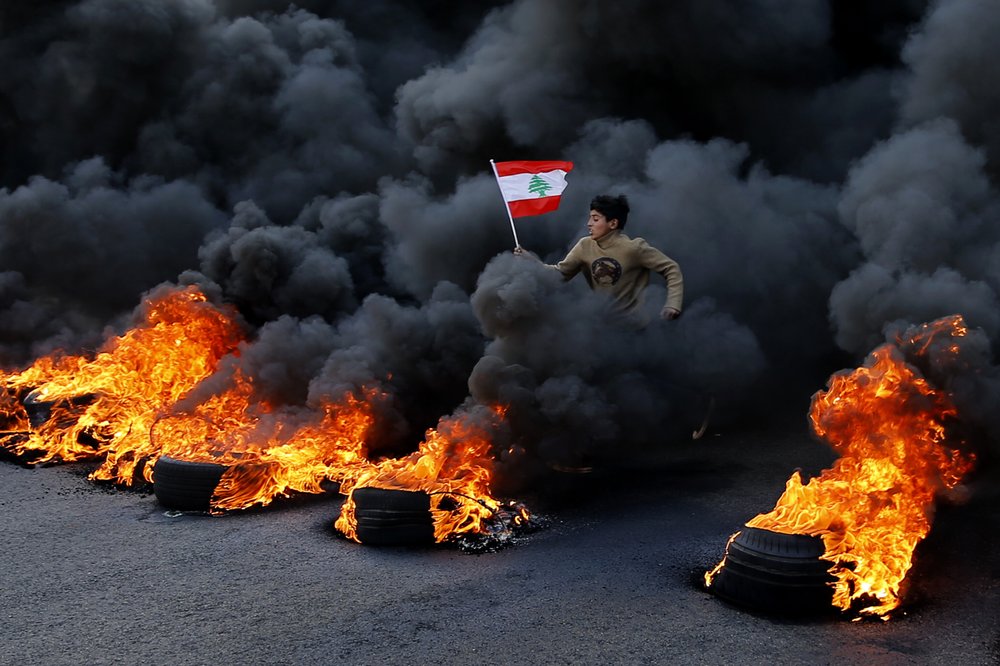 An anti-government demonstrator jumps on tires that were set on fire to block a main highway as he holds a national flag, during a protest in the town of Jal el-Dib, north of Beirut, Lebanon, Tuesday, Jan. 14, 2020. (Photo: AP)

Lebanese security forces lobbed tear gas at protesters who responded with rocks outside the country’s central bank Tuesday, a violent turn after demonstrators returned to the streets following a weekslong lull.

The street clashes near the central bank came as protesters resorted to blocking roads around the capital to express their impatience at a ruling elite they say has failed to address the economy’s downward spiral. The protesters have also been irate at the country’s banks, which have imposed capital controls on foreign currency accounts in the highly dollarized economy.

As the violence went on for hours, protesters began smashing the windows of banks and foreign exchange bureaus near the central bank. This all took place on one of Beirut’s most bustling commercial boulevards, Hamra Street, which is packed with theaters and restaurants. The street was deserted late Tuesday except for protesters and security forces.

Calm had prevailed since the designation of Hassan Diab as prime minister in mid-December. He has so far failed to form an emergency government amid political divisions and jockeying for power. The lull was also partly due to the holidays followed by soaring regional tensions between the US and Iran that eclipsed the protesters in Lebanon and Iraq demanding sweeping political change.

Clashes at the bank began late Tuesday after security forces arrested a few of the protesters. It was not immediately clear why they were arrested. Local media said the protesters had removed metal barriers erected around the central bank.

The demonstrators accuse the central bank’s governor of financial policies that have worsened Lebanon’s liquidity crunch.

The country is facing its worst economic crisis in decades. The local currency has lost over 60% of its value in just the past few weeks, while sources of foreign currency have dried up. Meanwhile, banks have imposed informal capital controls limiting withdrawal of dollars and foreign transfers in the country, which relies heavily on imports of basic goods.

Panic has set in among residents who fear their deposits are in danger. Protests have taken place inside commercial banks over the last few weeks as depositors tried to access their accounts.

But Tuesday night’s violence was the first outside the central bank. Security forces fired several rounds of tear gas while protesters lobbed rocks and fireworks. The pitched street battles were aired live on local TV stations. Some protesters smashed windows of at least two commercial banks and other shops nearby using metal bars.

Lebanon’s Internal Security Forces tweeted statements that “vandals have attacked security forces around the central bank trying to force their way inside it” using rocks and fireworks.

“We are worried about losing our savings ... Lebanon is not an easy country to save in,” said Riva Daniel, 40 years old, who was among those protesting outside the central bank since earlier in the day. “We don’t trust the banks here anymore.”

Protesters returned to the streets Tuesday blocking several roads around the capital, Beirut, and other areas of the country in the south and north. They burned tires and blocked several main highways leading to the capital from the south, east and north, bringing traffic to a standstill. School and university students took part in some of the protests and hundreds marched down main highways, raising Lebanese flags and blasting rallying songs through loudspeakers.

Samer al-Khoury, a 29-year-old protester, said the protesters were giving the politicians 48 hours to form a new government.

Rabie al-Zain, an activist protesting in Jal el-Dib, north of Beirut, said the rallies are a reminder to the rulers that the reasons for their protests are still here. “Today we add the students to the revolution — those who will handle the country when the current rulers will go to the dustbin of history,” he said.

In the northern city of Tripoli and in Akkar province, protesters sat in the streets and blocked several roads with burning tires or bricks. In Sidon, thousands of protesters rallied in a central square of the southern city. In the eastern city of Zahle, hundreds rallied by nightfall against the current political class.

In the afternoon, hundreds of protesters in Beirut had marched to the house of the recently designated prime minister.

Lately, protesters have also taunted politicians who showed up in shopping malls or restaurants, sometimes chasing them out of public places and decrying their failure to address the economic crisis.