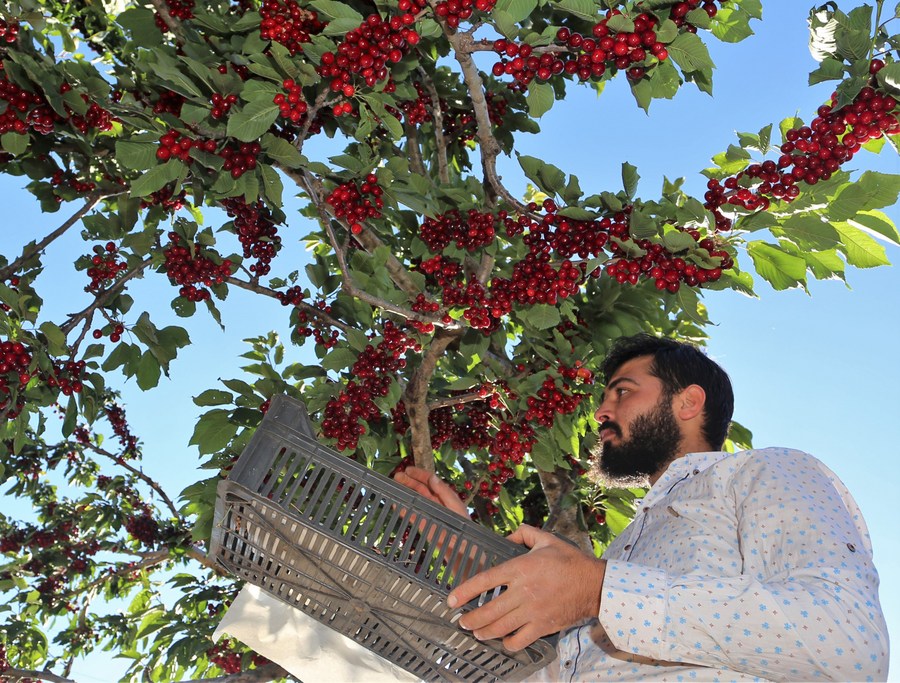 A farmer picks cherries in an orchard in the town of Shebaa in the east of southern Lebanon, on June 14, 2021. (Photo: Xinhua)

Yahya climbs the trees while carrying a bowl. He first places the cherries in the bowl and then, with the help of his children, packs up the fruit in plastic boxes with a capacity of 12 kg each.

While wiping the sweat from his forehead, Yahya told Xinhua that he is optimistic about this year's cherry season as his 250 cherry trees increased their production by 30 percent compared to last year.

He added that he looks forward to benefitting from the rise in the prices of cherries which are currently sold at around 15,000 Lebanese pounds (1 U.S. dollar) per one kilogram, while its price did not exceed 8,000 LBP last year.

"We have been eagerly waiting for the cherry season this year to be able to earn enough income to cover our orchard's expenses, which saw an unprecedented rise amid the collapse of the local currency," Yahya said.

Yahya is keen to pick the ripe cherries before they are damaged by birds in the day and bats at night. So he tries to speed up the process by hiring some Syrian refugees to help him.

For his part, farmer Adel Abu Latif, who was gathering with four of his family members around a lush cherry tree in Aaiha, a village in Rashaya, told Xinhua that cherry harvesting lasts for several weeks and it is accompanied by the rituals of preparing food and tea.

"Families help each other in picking the fruits in a joyful atmosphere, especially when the harvest is as abundant as it is this year," he said.

"The best thing about cherry picking is the opportunity it gives to people to meet and enjoy the fresh air in mountains," she said.

The abundant cherry fruits in Lebanon gained the country a reputation in high quality cherry jam production produced by factories and households.

Nawal Abou Ghaida, head of an association that packs fruits and sells them in Hasbaya, southern Lebanon, told Xinhua that the association is now working on drying the cherries to make cherry jam which is increasingly popular among consumers.

According to the Lebanese Ministry of Agriculture, an approximate of 10,000 hectares in Lebanon are planted with cherry trees with an annual production rate of 67,000 tons.

Agriculture in Lebanon contributes by around 7 percent to the country's GDP, and it provides income for about 15 percent of the population.