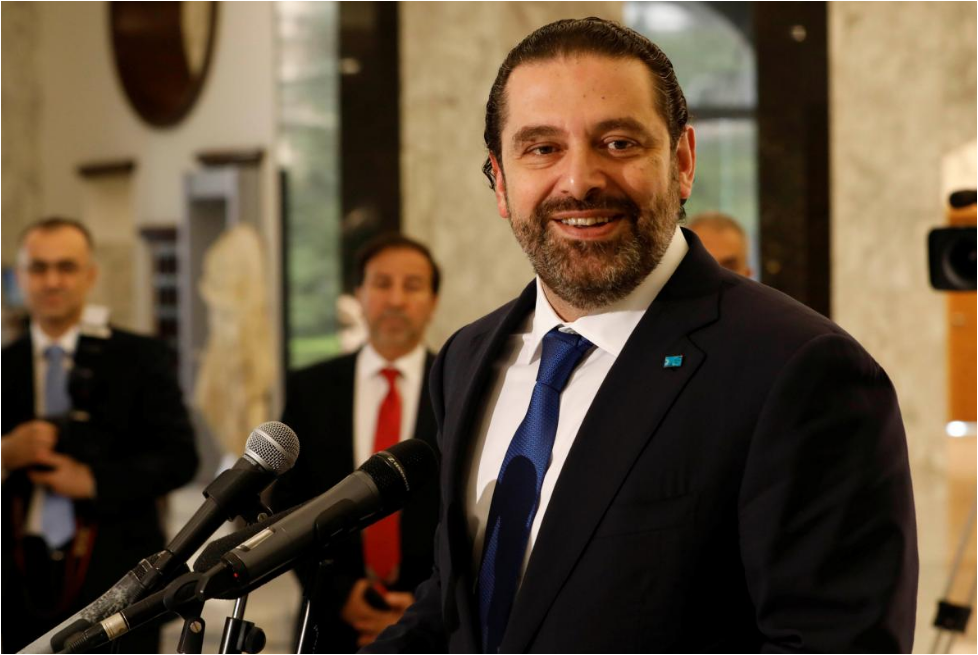 Saad al-Hariri was designated as Lebanon’s next prime minister on Thursday and said all parties agreed that a national unity government must be formed as quickly as possible due to economic risks at home and growing dangers in the region.

The new coalition government is expected to reflect the enhanced political position of the Iran-backed Shi’ite group Hezbollah and allies that support its possession of arms, which together won at least 70 of parliament’s 128 seats in an election on May 6.

Hariri won the support of nearly all the MPs in the new parliament during consultations with President Michel Aoun on Thursday, reflecting his status as the top Sunni politician despite his steep losses in the election.

The post of prime minister is reserved for a Sunni Muslim in Lebanon’s sectarian power sharing system. This will be the third time Hariri serves as prime minister since he was thrust into politics by the 2005 assassination of his father, Rafik.

“All the main parliamentary blocs have agreed on the need to form a national unity government as fast as possible in light of the growing regional dangers around us and domestic economic and financial pressures”, Hariri said after meeting Aoun.

Hariri lost more than a third of his seats, mostly to Hezbollah and Hezbollah-aligned groups. The staunchly anti-Hezbollah Lebanese Forces, a Christian party, nearly doubled its MPs to 15.

Hezbollah is designated a terrorist group by the United States, and Washington has singled out the group in its new policy against Iran since withdrawing from the Iran nuclear deal this month.

Hariri said the new government must recommit to a policy of “dissociation” from regional conflicts and establish the best relations with Arab states, a reference to Gulf countries that see Iran and Hezbollah as a regional menace.

This policy has kept the Lebanese state officially neutral in the regional tussle between Sunni-led Saudi Arabia and Shi’ite Islamist Iran even as Hezbollah has deployed fighters to Syria and Iraq and supported Houthi rebels in Yemen.

Analysts believe the power balance tilted in favor of Hezbollah and allies could lead to a widening of ties with the Syrian government that is shunned by the West and Gulf Arab states that backed the uprising against President Bashar al-Assad.

The cabinet must absorb the competing agendas and power struggles among Lebanese parties. Previous coalition governments have previously taken months to form.

Hariri’s name was put forward by 111 out of 128 members of Lebanon’s new parliament during consultations with President Michel Aoun on Thursday. Aoun had to designate the candidate with the greatest backing.

While Hariri won wide backing, Hezbollah MPs, a few of its allies and one other lawmaker named nobody for the post.

Hezbollah said it would cooperate “positively” with whoever was designated, Mohammed Raad, head of Hezbollah’s parliamentary bloc, said after meeting Aoun.

All Lebanese leaders have called for the rapid formation of a new government that will aim to revitalise a stagnant economy situation and address unsustainable public debt levels.

Hezbollah intends to secure three cabinet seats in the next coalition government. This would be an increase from the two portfolios it held in the outgoing cabinet of 30 ministers, a senior official familiar with the group’s thinking told Reuters.

Hezbollah, which has to date held only marginal cabinet posts, is also seeking more significant service-providing ministries in the new cabinet, sources familiar with its thinking have told Reuters.

Hezbollah also believes a cabinet post should be allocated to one of its Sunni allies who wrested seats away from Hariri’s Future Movement.

Parliament re-elected the Hezbollah-allied Shi’ite politician Nabih Berri as its speaker on Wednesday, extending his tenure in the post he has held since 1992. Another Hezbollah ally, Elie Ferzli, was elected as his deputy.