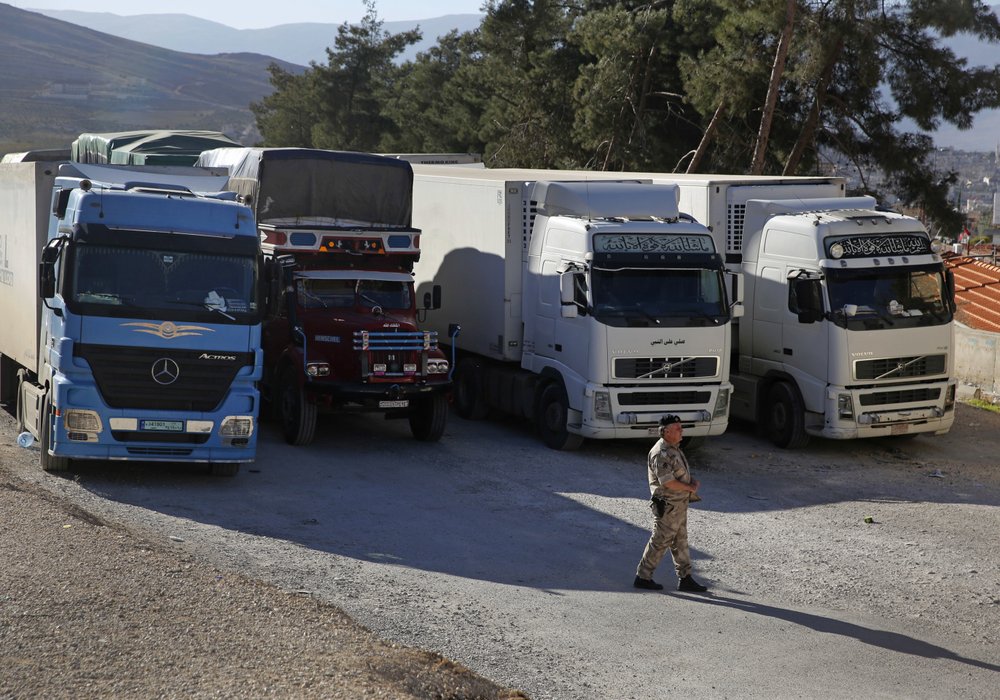 In this Oct. 31, 2018 photo, a Lebanese customs officer walks past trucks waiting to cross into Syria from the Lebanese border crossing point of al-Masnaa, in Bekaa Valley, Lebanon. (Photo: AP)

Lebanese exporters rejoiced last month when the Syrian government opened a key land crossing with Jordan that had been closed by years of war, restoring a much-needed overland trade route to lucrative Persian Gulf markets.

But lingering disputes between Lebanon and Syria, and political gridlock in Beirut, mean that many Lebanese businesses still rely on longer and costlier transport by sea, further stalling efforts to restore an economy battered by years of war in its larger neighbor.

The reopening of the Naseeb-Jaber crossing allowed Mohammed Araji, owner of a trucking firm in Lebanon’s Bekaa Valley, to retrieve two trucks that had been stranded in Jordan since 2015, when Syrian rebels captured the crossing. Two other of his refrigerator trucks had been parked in front of his house for the last three years.

Even before the crossing officially closed, his brother was briefly abducted by rebels while driving a truck through Syria, underscoring the perils they faced in trying to keep the route open.

The crossing was Lebanon’s “lung,” Araji said, and its closure was a “death blow” to the economy, affecting farmers, merchants, industrialists and drivers. So he was pleased when Syrian government forces reopened the crossing and secured the route.

But for weeks he was unable to find exporters ready to give him shipping contracts. Finally, on Saturday, he sent his first truckloads to Saudi Arabia after offering an exporter an attractive price.

“People are still waiting to see what will happen,” he said.

The land route through Syria, Jordan and Iraq is vital to Lebanon, which is squeezed between Syria, the closed border with Israel, and the sea. Lebanon’s exports plunged from a high of 78 percent of GDP in 2008 — three years before the start of Syria’s civil war — to a low of 36 percent in 2017.

Before Naseeb’s closing, more than 250 trucks a day headed from Lebanon to markets in Syria, Jordan, Iraq and the Gulf. After the closure, that dropped to some 300 trucks in a good month, bound only for Syria, customs officials said.

An estimated 550,000 tons of vegetables and fruits a year used to be exported through the Syria-Jordan crossing, according to Ibrahim Tarshishi, head of the Bekaa farmer’s union. Since the shutdown, that flow has dropped by nearly 40 percent, to no more than 330,000 tons. Exports from Bekaa to Saudi Arabia have dropped by 60 percent, according to figures from the Bekaa chamber of commerce.

Traders hope improved ties between Syria and Lebanon will lead to reduced tariffs, but Lebanon’s political leaders are fiercely divided between supporters and opponents of President Bashar Assad, and they have been unable to form a government since elections in May.

Contacts among Lebanese and Syrian officials remain personal and partisan — and some complain Syria is using the tariffs to force normalization. Experts say opaque policies and decision-making have also hindered trade.

Charles Zarzour, the head of the government agency for agricultural exports and imports, said the opening of the crossing has at least offered “psychological relief” to traders.

“God willing, when we have a government in Lebanon, it lays down a wise policy that serves the country’s interest,” including tariff reductions, he told The Associated Press.

Tarshishi has pressed for an end to the sea shipping subsidies and other government action to revive land exports, but in the caretaker government “no one wants to take responsibility,” he said.

On a recent afternoon at al-Masnaa, the Lebanese side of the crossing into Syria, nearly a dozen trucks loaded with bananas were bound for Damascus. Just one truck, carrying cleaning supplies, was heading to Jordan. None were bound for the Gulf.

Talal Darwish, a produce exporter, is still sending his grapes, apples and pears by sea, and on a recent day, workers raced to prepare a shipment bound for Kuwait. By land would be cheaper and faster — a five-day trip as opposed to 25.

He has heard talk of efforts to reduce tariffs, but says “we still don’t know officially, so there is no rush.”