Lebanon’s new PM says he plans a government of experts 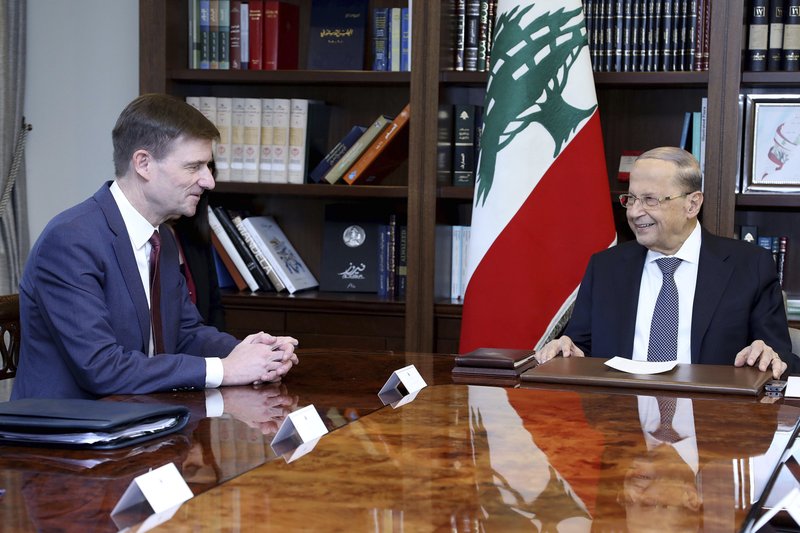 Lebanon’s newly designated prime minister said Friday he plans to form a government of experts and independents to deal with the country’s crippling economic crisis. He asked protesters to give him a chance to try and fix the country’s fast-sinking economy.

Hassan Diab spoke to reporters following a meeting with former Prime Minister Saad Hariri, a day after he was asked by the president to form the country’s next government. Diab, who is backed by the militant Hezbollah group and its allies, begins his task with the backdrop of ongoing nationwide protests against Lebanon’s ruling elite. The country is grappling with its worst economic and financial crisis since the end of the 1975-90 civil war.

In the first U.S. comments after Diab’s appointment as prime minister, a senior U.S. official said Washington is ready to help Lebanon “but can do so only when Lebanon’s leaders undertake a credible, visible and demonstrable commitment to reform.” U.S. Undersecretary of State for Political Affairs David Hale spoke during a visit in Beirut where he met with the president, parliament speaker and caretaker prime minister Hariri.

Western countries have been holding $11 billion in loans and grants made by international donors at a conference in Paris last year until reforms are carried out in Lebanon, where corruption and mismanagement are widespread.

Diab, a university professor and former education minister, won a majority of lawmakers’ votes after receiving backing from the powerful Shiite Muslim group Hezbollah and its allies. However, he lacks the support of major Sunni figures, including the largest Sunni party headed by Hariri.

That is particularly problematic for Diab, who as a Sunni, lacks support from his own community. And under Lebanon’s sectarian power-sharing agreement, the prime minister must be Sunni.

Diab, however, emerged from Friday’s meeting with Hariri saying the atmosphere was “positive.”

“As an expert and an independent, my inclination is to form a government that is truly made up of experts and independents,” he said.

Shortly after he spoke, scuffles broke out between Hariri supporters protesting on a Beirut street and Lebanese army units, underlying tensions on the ground. The protesters briefly blocked a main highway in central Beirut, expressing their rejection of Diab.

The protesters brought a truck full of sand and rocks to build a roadblock, at which point the army interfered to remove the protesters and the truck. A short scuffle ensued, with soldiers pushing and shoving angry protesters. At one point, soldiers kicked one man and another was injured, apparently by police hitting him on the head with a baton. Hariri urged his followers to open the roads.

Later in the day, the protesters blocked the main highway linking Beirut with southern Lebanon with burning tires, causing a miles-long traffic jam. The army opened the road briefly in the town of Naameh before protesters closed it again with flaming tires.

The road closures in Beirut and Naameh appeared to be carried out by Sunni protesters who back Hariri. They were angered by what they said was Hezbollah and its allies deciding who takes the country’s top Sunni post. Hezbollah has backed Hariri for prime minister from the start, but they differed over the shape of the new government.

“I ask (protesters) to give us a chance to form an exceptional government” that can work on resolving the country’s many problems, accumulated over the past 30 years, Diab said.

Diab faces huge challenges in trying to form a consensual government that would also satisfy protesters. Demonstrators have been on the streets since mid-October, seeking to sweep away an entire political class they deem as corrupt. Diab also faces the mammoth task of dealing with the country’s economic and financial crisis in one of the most indebted countries in the world.

Support from the Iran-backed Hezbollah guarantees Diab a thorny path, potentially inviting criticism from Western and Gulf nations that had supported Hariri. The Shiite group is designated a terrorist organization by the U.S., some Gulf Arab countries and a few Latin American nations.

Hale, on his visit Friday to Beirut, did not directly comment on Diab’s appointment, saying only that the United States “has no role in saying who should lead” a Cabinet in Lebanon or anywhere else.

“I’m here to encourage Lebanon’s political leaders to commit to, and undertake, meaningful, sustained reforms that can lead to a stable, prosperous and secure Lebanon,” he said after meeting with President Michel Aoun. “It’s time to put aside partisan interests and act in the national interest, advancing reforms and forming a government that is committed to undertaking those reforms and capable of doing so.”

Hale is the most senior foreign diplomat to visit the country since mass protests erupted in mid-October. The sustained, leaderless protests forced Hariri’s resignation within days but politicians were later unable to agree on a new prime minister. The ongoing protests and paralysis, meanwhile, worsened the economic crisis.