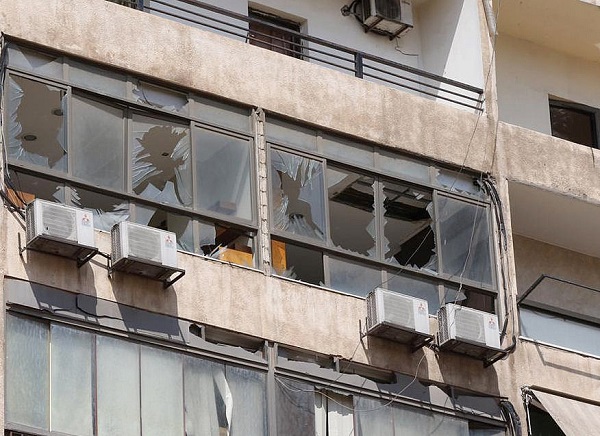 Broken windows are pictured after an Israeli drone fell in the Hezbollah-dominated southern suburbs and a second one exploded near the ground in Dahiyeh suburbs of Beirut, Lebanon August 25, 2019. (Photo: AP)

Hariri assured that he is in touch with President Michel Aoun and House Speaker Nabih Berri to agree on the next measures that should be taken following the incident which constitutes a threat to regional stability and an attempt for further escalations, a statement by Hariri's office said.

"The Lebanese government will also assume full responsibility by taking a proper action against any threat to national security and stability," he said.

An Israeli drone went down over southern suburbs of Lebanon's capital Beirut early on Sunday morning, while a second drone exploded in the air causing severe damage to a media center for Hezbollah.

Hezbollah's media advisor Mohamad Afif was quoted as saying by the National News Agency on Sunday that Hezbollah is currently observing the drone that did not explode to investigate reasons behind its flights over Beirut and the operations it was planning to implement.