BEIRUT, Sept. 13 (Xinhua) -- Lebanon has struggled to find a proper solution to deal with its waste crisis since the situation deteriorated in the wake of its civil war. 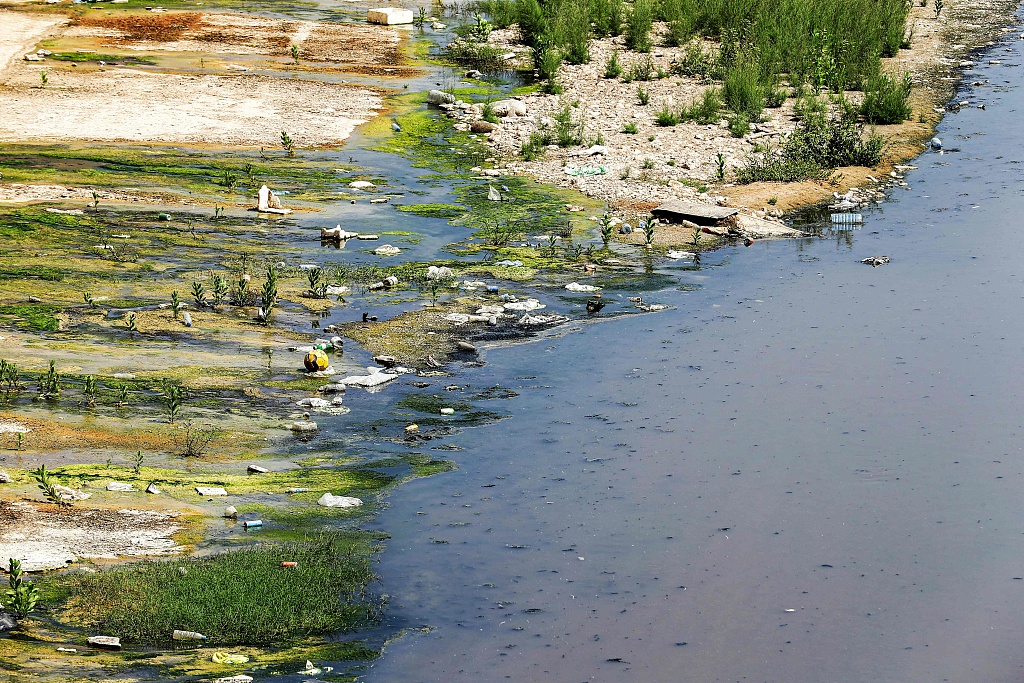 This picture taken on August 6, 2019 shows a close-up view of sewage water running along the concrete canal of the dry Beirut river in the Lebanese capital. (Photo: VCG)

The garbage problem emerged following the closure of the controversial Naameh landfill in July 2015, which has disposed more than 15 million tons of trash, a number far more than two million tons as originally planned in 1998.

In fact, Lebanon produces a bit more than two million tons of trash every year with 94 percent of garbage being buried in landfills and around 6 percent getting recycled.

Despite the European Union's efforts to upgrade solid waste management capacities, Lebanon still finds itself unable to deal with the increasingly amount of trash.

"The main problem with trash in Lebanon is that the government did not resort to the original waste hierarchy ...  over 90 percent of our waste today is placed in landfills while we disregarded the most important steps," Julien Jreissati, Arab world campaigner at Greenpeace Mediterranean, told Xinhua.

Jreissati explained that the first step in proper waste management is to reduce waste.

"This way we would be already addressing the issue of lands use," said Jreissati.

He added that there should be incentives to avoid people using plastic bags, for instance, imposing taxes on such material or providing alternatives to such products.

Jreissati said the third step to tackle garbage is recycling.

However, he explains the weakness of waste classification makes recycling quite difficult in Lebanon, enumerating that trash collecting companies compress waste all together which makes it impossible to sort.

"We need to sort from the source and the companies themselves need to collect different kinds of wastes," he added.

Besides, Jreissati opposed to burning waste by incinerators, noting that incinerators are the most expensive solution and can only burn organic waste.

"If we use incinerators we would be converting safe stable waste into toxic waste and fly ash which, in other countries, are normally sent to islands and buried thousands of meters under the ground," he said.

For his part, Environment Minister Fadi Jreissati did not seem too insistent on incinerators. His plan for waste management includes the creation of two incinerators by the government and a third one by Beirut's municipality.

"Any solution that would lessen the use of landfills would be environmentally profitable for me. The incinerator's problem is not toxins because we can change filters and there would be a supervision by international experts in partnership with academics," he told Xinhua.

The minister added that fly ash can be put in sanitary landfills which is not bad because today all the trash is being buried in landfills everywhere in the world.

However, the minister insisted that the main plan for the ministry before resorting to incinerators would be reducing, sorting and then recycling waste while reducing import by reusing the products that Lebanon already has.

He added that his ministry will impose fees on products that are not environmentally friendly to reduce the consumption of non-environmental friendly products.

The minister also said that every factory that contributes in polluting air will pay for the installation of waste treatment plants and filters.

"More than 45 factories have done environmental compliance studies till now while there remain 25 factories that need to do such studies. Also, 10 factories have closed because they did not show any compliance with proper conditions," the minister added.

The minister explains that his ministry will meanwhile be establishing 25 sanitary landfills for each district in addition to creating factories in all areas for sorting composting, anaerobic digestion and possibly gasification and pyrolysis.

"We are open to all solutions," he said while adding that some municipalities in some areas of Lebanon are coming up with their own solutions that are being under study by the ministry.