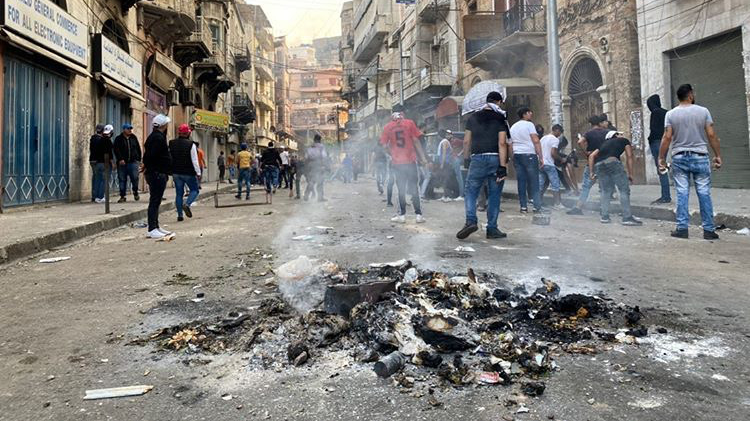 The scene left behind after protesters move on. (Photo: CGTN)

Fire-bombed banks, mass protests, widespread hunger, economic collapse. Lebanese citizens couldn't have guessed that their collective political and economic demise – already in tatters at the start of 2020 – could sink lower.

Then came COVID-19 with offshoot effects including deeper economic crisis, unemployment, Central Bank restrictions on account withdrawals, and a Lebanese pound so unsteady in value that its exchange rate sometimes fluctuates several times in a single day.

"Our economy is collapsing. It already collapsed. We're trying to salvage what's left of it," said one protester in Tripoli.

Unrest in the making: The backdrop

Conditions for current civil upheaval were ripe in the making months and years before the current unrest unfolded.

As one economic analyst told CGTN, four percent of Lebanon's elite holds 80 percent of its wealth. That sector also has the means to spirit funds out of the country – which it did in mass quantities when demonstrations over national finance and political mishandling erupted in October. The "haves" essentially bankrupted the remaining 96 percent.

The Central Bank's proverbial cupboards are now bare, which is why the Bank now limits withdrawal amounts, holding onto depositor funds. New rules stipulating withdrawals can only be extracted in the local pound translates into dramatic losses for account holders.

One hundred U.S. dollars wired from Dubai to Beirut, for example, drops to around a 40 dollars value when withdrawn in Lebanese pounds.

Alongside financial problems sits long-time political infighting and a nation plagued by corruption. Last week, Germany classified Hezbollah, one of the most powerful political parties in Lebanon, as a terrorist organization, raiding offices and outlawing the group's activity in Germany.

The EU designates Hezbollah's militant wing – but not its political arm – as terrorist. The United States and Israel categorize the entire organization as a terrorist operation.

A Dark Tunnel Without Much Light

As an increasing number of Lebanese citizens anguish over feeding families and paying rent, Rabih comments:

"We're in this black tunnel. Let's call it a tunnel. But we haven't reached the end of it yet."

Rabih predicts civil war at the end of that tunnel similar to Lebanon's 15-year civil war that started in 1975.