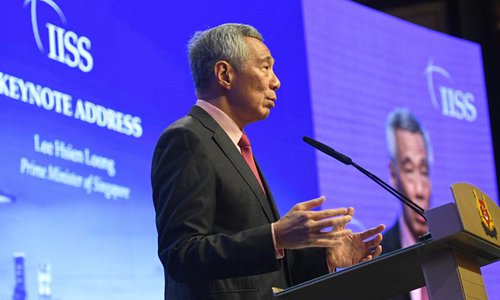 The speech by Singaporean Prime Minister Lee Hsien Loong at this year's Shangri-La Dialogue indicated that the international community does not want to see tensions and conflicts between China and the US, Chinese experts said as three days of meetings concluded on Sunday.

In his keynote speech at the 18th Shangri-La Dialogue on Friday, Lee said the rest of the world must adjust to a larger role for China. "Countries have to accept that China will continue to grow and strengthen, and that it is neither possible nor wise for them to prevent this from happening," he said.

China has totally changed since reform and opening-up began 40 years ago, and China's growth has shifted the strategic balance and economic center of gravity of the world, he said. That shift continues, Lee noted.

Shen Shishun, an Asia-Pacific expert at the China Institute of International Studies,  told the Global Times that Lee's speech was "positive and responsible for the develop­ment and stability of interna­tional society. As someone who understands China and the world so well, he said it from his heart."

Not only Singapore, but the whole international community does not want to see a trade war and major conflicts between China and the US. The US must face the reality of the rise of China and adapt itself to the world trends of globalization, multilateralism and free trade, Shen said.

The forum opened amid the ongoing trade war between China and the US as the US slaps tariffs on Chinese goods and imposes bans and restrictions on Chinese technologies and scholars.

Since the second half of 2017, Singapore's ties with China have greatly improved. The country is seeking certainty as a response to the uncertainties brought by Trump's America First policy, said Ge Hongliang, director of the China-ASEANMaritime Security Studies Center in Guangxi University for Nationalities.

"The trade war is extensively impacting the global industrial chain, and it is impossible for Asian countries to remain unscathed, particularly a small and export-oriented economy like Singapore," Ge said.

Commenting on the China-US relationship, Lee said it is the most important in the world today. "How the two work out their relations and frictions will define the international environment for decades to come."

The US being the preeminent power has the most difficult adjustment to make. But however difficult the task, it was well worth the US forging a new understanding that will integrate China's aspirations within the current system of rules and norms, Lee noted.

Min Zaw Oo, executive director of Myanmar institute for peace and security, said ASEAN is ready to embrace China as a rising power in the region, but at the same time there are concerns within ASEAN about China such as the South China Sea issue. "The US is doing a lot of exercises and selling weapons to its potential allies in Southeast Asia. This is pressure for Southeast Asia. Countries in the region would like to see more resolution than confrontations, especially when the US escalates its confrontation against China."

When asked how small countries can avoid picking sides, Lee said that "we do our best to be friends and maintain our relationship with both," but it also requires actively not being pressured to take sides.

The US forcing other countries to take sides will only bring instability to Southeast Asia and will not be welcomed by the countries in this region either, said Shen, adding that "a win-win China-US relationship is not only beneficial to themselves, but also significant to the global economy."