WORLD Les Cayes, mourning and struggling to return to normal life in aftermath of massive quake

Les Cayes, mourning and struggling to return to normal life in aftermath of massive quake 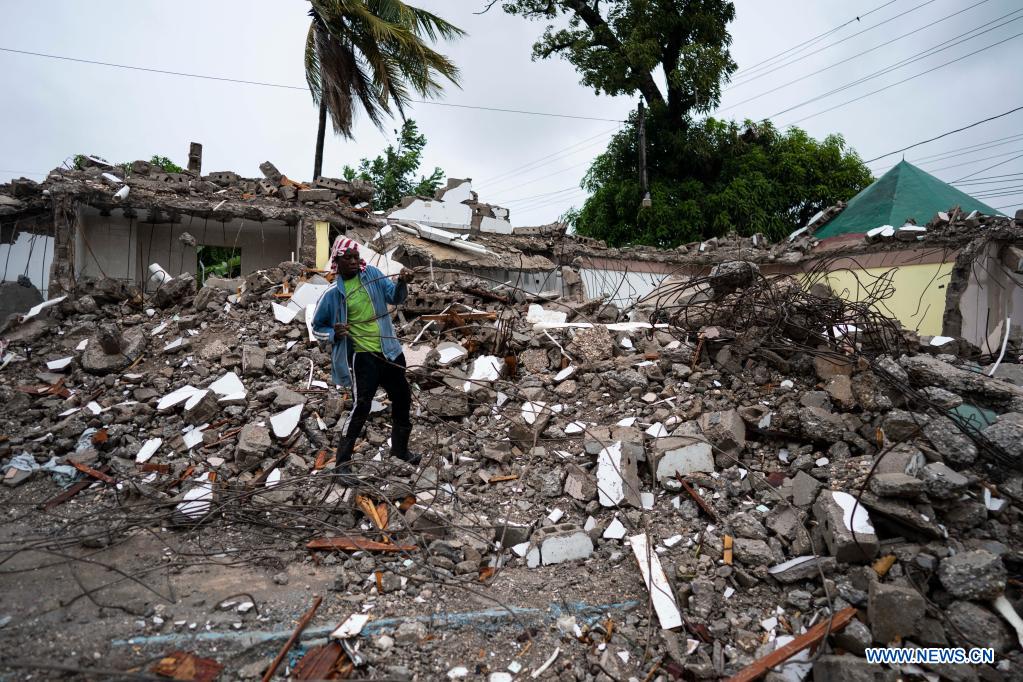 A man removes debris from a collapsed house after the earthquake in Les Cayes, Haiti, Aug. 17, 2021. (Photo: Xinhua)

In a more remote area, people gather at the Camp Perrin River to recover logs and pieces of wood from destroyed homes that have been washed away by the fast-flowing current for cooking or rebuilding homes.

In the center of Les Cayes, the scene is radically different, as people try to return to their normal daily lives in the wake of the quake and tropical storm Grace.

The streets are bustling with vehicles, motorcyclists and pedestrians, with collapsed buildings in the background.

At a popular market crowed with people, vendors start to offer fruits, vegetables and other products as before.

It is a different scene inside the Immaculee Conception Hospital, where the aftermath continues, with hospital beds and corridors overcrowded with the injured.

People with fractures, cuts or concussions are being treated in one area of the hospital while more severe cases in another.

Suddenly, an aftershock sent everyone scrambling for the exits, some carrying injured loved ones on stretchers and others helping them walk out.

After the aftershock passed, everyone returned to the hospital, only to find a 52-year-old woman lying dead in a bed in the corner, surrounded by her family. She eventually succumbed to her injuries. Those who survived remained silent, with their sadness and regrets speaking for them.

As hospital staff completed the task of registering and marking the bodies, the woman became yet another statistic of this catastrophe.

Less than a week after the earthquake rattled the island, Haitians struggle to survive and return to normal life in the Latin America's least developed country.