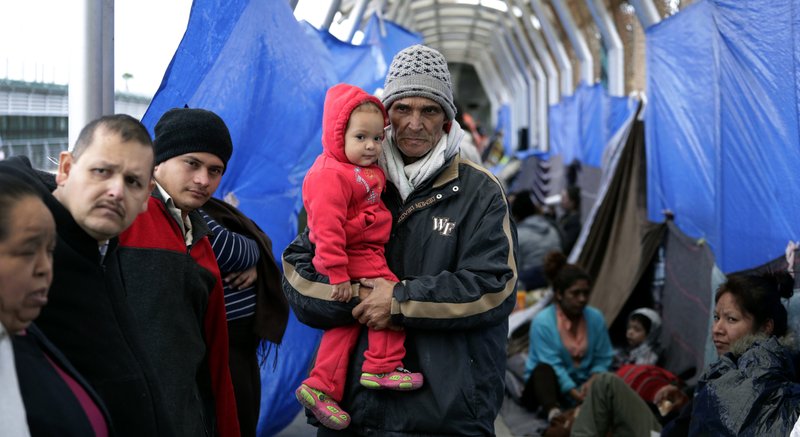 US border officers charged with turning away asylum seekers under Trump administration policy accused their leadership of misleading the public and disregarding concerns for their own safety, according to documents released to The Associated Press.

A March 2019 letter sent to the head of US Customs and Border Protection demanded that he intervene to ensure the agency’s front-line employees at one Texas bridge “are not injured or killed” enforcing the policy limiting the number of asylum seekers allowed in the US. The letter further challenges claims repeatedly made by President Donald Trump’s top immigration officials that his efforts to limit asylum have improved public safety while treating migrants humanely.

It was written by David Atkinson, the Hidalgo, Texas, chapter president of the National Treasury Employees Union, which represents CBP employees at official ports of entry.

Texas is separated from Mexico by the Rio Grande and connected by bridges. Since the early days of the Trump administration, CBP has positioned officers and installed booths at the center of those bridges to stop asylum seekers from reaching the US side. Some bridges allow no more than a few people to cross daily.

The practice is informally known as “ metering.” CBP has long contended that with a surging number of migrant families seeking asylum — with record highs set earlier this year — it doesn’t have enough capacity to take in everyone at once.

Atkinson argued in his letter to then CBP Commissioner Kevin McAleenan that “metering” was “putting the asylum seekers and employees in pest-infected areas known to be susceptible to gunshots.” Reynosa, the city across from the Hidalgo, Texas, bridge, is one of the most dangerous in Mexico.

The employees carrying out those policies also “would like something in writing to protect their ordered activities, as the Agency is claiming publicly that they are not conducting these activities when they really are,” Atkinson wrote.

Atkinson also acknowledged an open secret in many border towns: The wait lists created due to metering have fueled cartel business and officials seeking bribes to move migrants up in line. He wrote that officers were informed that Mexican officials are allowed to run the bridge “for the right price.”

Atkinson, McAleenan and CBP did not respond to requests for comment.

The documents were originally obtained by lawyers for the Los Angeles-based immigration advocacy group Al Otro Lado, which has sued the US government over what it says is a practice of turning away asylum seekers that dates back to 2016, during the last months of President Barack Obama’s administration. The lawyers shared the documents with the AP.

Officer complaints about turning away asylum seekers go back to at least March 2017, when another union official, Wiliam Haralson, discussed a formal grievance with CBP and alleged that the agency “caused traumatic and emotional injury to children.”

Homeland Security’s inspector general in September published a review prompted by another border officer who raised concerns about “metering,” this time at a border crossing station in Tecate, California. The review found that some CBP officials had sent away asylum seekers even after they had crossed into the US, telling them they had to make their claims elsewhere.

“Metering” is one of several Trump administration policies or proposals targeting asylum. Under its “Remain in Mexico” program, the administration has sent more than 50,000 people back across the border to await immigration court dates that are weeks or months away. The US government has also tried to force asylum seekers to settle in Mexico or Central American countries that have seen thousands of people flee poverty and violence.