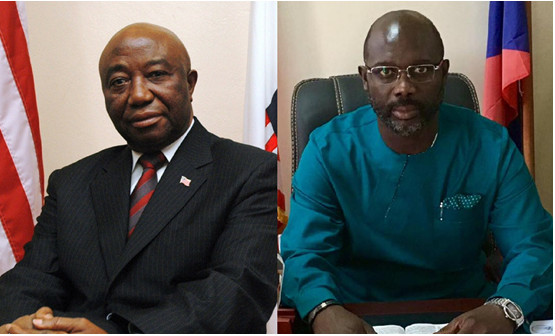 Johannesburg (People’s Daily) - West African country Liberia will elect the country’s next president on Tuesday. The event will mark the first democratic transition the African nation has had in over 70 years.

More than 2.1 million Liberian voters will head to the polls to choose between former football star George Weah, of the Coalition for Democratic Change (CDC), and incumbent Vice President John Boakai, of the Unity Party. The winner will succeed President Ellen Johnson Sirleaf.

Polling stations open at 8 am and close 6 pm Tuesday. The European Union, African Union and the regional Economic Community of West African States (ECOWAS) have set up monitoring stations to ensure the election is a free and fair process.

Twenty years ago, George Weah was a world-renowned FIFA football star. In October he came out ahead in first round voting.  The presidential run is Weah’s third bid for the nation's top seat.

A few days ago Weah reiterated earlier campaign promises and told Liberians that if he wins he will invest heavily in agriculture, employment growth, healthcare, and education.

Vice President Bokai won almost 30 percent of the first-round votes from October. His campaign platform focussed on infrastructure development such as improving highways and roads.

Boakai also promised to create 50,000 jobs during his first five months in office should he win Tuesday’s election.

Heading into the polls on December 26, Weah was in the lead.

The next Liberian president will serve a 6-year term.

Official ballot results are expected to be tallied before December 28. The presidential inauguration will take place on on January 22, 2018, in Monrovia, the nation’s capital.

Liberia was the first republic in Africa and was founded by freed slaves from the US who implemented similar democratic principles from the American system.

Liberia is one of the most impoverished nations in the world today with a GDP per capita of $475.

Three years ago, an Ebola epidemic swept through the country claiming 5,000 lives.

The nation has been in a recession since 2014. Political analysts have said that repairing Liberia’s economy will be the most challenging task ahead for the next president.