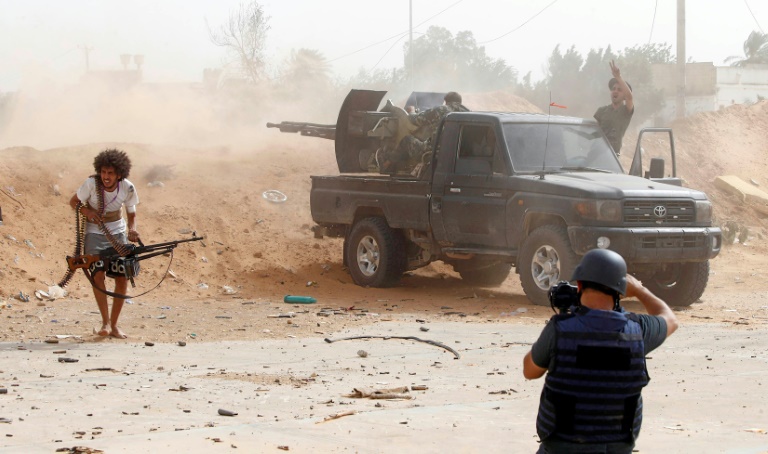 Libya has been torn by fighting between rival armed factions since a 2011 NATO-backed uprising killed dictator Moamer Kadhafi and toppled his regime. (Photo: AFP)

The move to cripple the country's main income source was a protest against Turkey's decision to send troops to shore up Haftar's rival, the head of Tripoli's UN-recognised government Fayez al-Sarraj.

It comes ahead of a conference in Berlin on Sunday that will see the United Nations try to extract a pledge from world leaders to stop meddling in the Libyan conflict -- be it through supplying troops, weapons or financing.

The presidents of Russia, Turkey and France as well as US Secretary of State Mike Pompeo are due to join the talks, held under the auspices of the UN.

Both Haftar and Sarraj are also expected, German Foreign Minister Heiko Maas confirmed Saturday, ahead of the first gathering of such scale on the conflict since 2018.

After months of combat, which has killed more than 2,000 people, a ceasefire took effect on January 12 backed by both Ankara and Moscow, which is accused of supporting Haftar.

But Saturday's blockade raised fears over the conflict.

The disruption to oil exports is expected to more than halve the country's daily crude production, to 500,000 barrels from 1.3 million barrels, translating to losses of $55 million a day, warned Libya's National Oil Company.

"Our line at the UN is clear. Don't play with petrol because it's the livelihood of the Libyans," warned Salame just hours before the blockade.

"Don't play with petrol, be it by turning it into a weapon of war or a way to cause divisions or as a bidding tool."

Jalal Harchaoui, an expert at the Hague-based Institute Clingendael, said the petrol blockade is part of "the logic of blackmail".

"It can work, but there's also a risk that Washington will react badly" he said, explaining that the US administration is deeply opposed to any move that could drive up crude prices.

The oil-rich North African country has been torn by fighting between rival armed factions since a 2011 NATO-backed uprising killed dictator Moamer Kadhafi and toppled his regime.

Although Sarraj's government is recognised by the UN, some powerful players have broken away to stand behind Haftar -- turning a domestic conflict into what is essentially a proxy war with international powers jostling to secure their own interests from global influence to oil and migration.

Alarm grew internationally when Ankara ordered in troops early January to help shore up Sarraj, while Moscow is suspected of providing weapons, financing and mercenaries to Haftar -- something Russia has denied.

"We must end this vicious cycle of Libyans calling for the help of foreign powers. Their intervention deepens the divisions among the Libyans," said Salame, noting that the place of international players should be to "help Libyans develop themselves".

"Today we only have a truce. We want to transform it into a real ceasefire with monitoring, separation (of rival camps), repositioning of heavy weapons" outside urban zones, he said.

The UN had sought on multiple attempts to bid for peace, but talks have repeatedly collapsed.

On the eve of the Berlin talks, Turkish President Recep Tayyip Erdogan warned Europe to stand united behind Sarraj's government, as Tripoli's fall could leave "fertile ground" for jihadist groups like IS or Al-Qaeda "to get back on their feet".

Erdogan also played up Europe's fears of a repeat of the 2015 refugee crisis in his commentary for Politico news website, that further unrest could prompt a new wave of migrants to head for the continent.

Accusing France in particular of siding with Haftar, Erdogan said leaving Libya to the commander would be a "mistake of historic proportions".

France has denied it was backing Haftar. But a diplomatic source noted that the fact that the commander already controls 80 percent of Libya needed to be taken into account.

The European Union is watching with growing alarm at the escalating strife on its doorstep as it counts on Libya as a gatekeeper deterring migrants from crossing the Mediterranean.