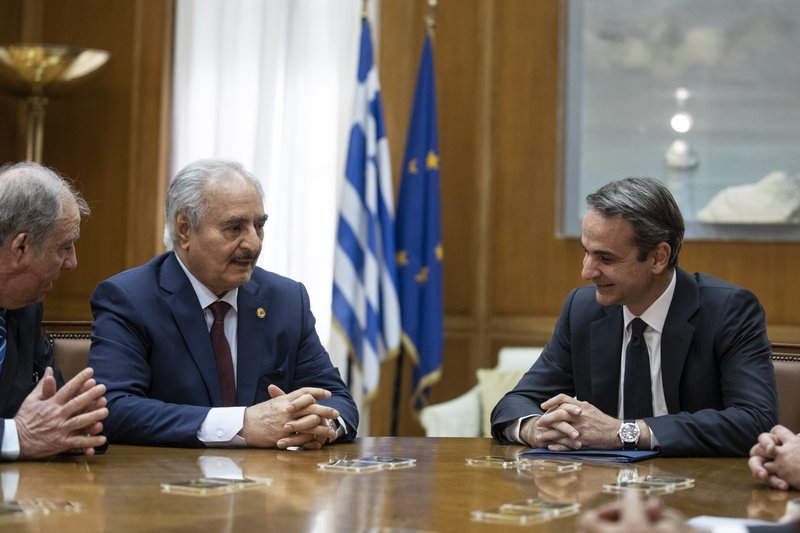 The commander of forces fighting the UN-supported government in Libya visited Athens Friday in a bid to counter Turkey’s support for his opponents, ahead of a weekend summit on Libya in Berlin.

Gen. Khalifa Hifter’s surprise trip to Greece came two days before the Berlin summit, which aims to halt the conflict in the oil-rich country that is being fueled by competing international support for the warring sides.

Separately, the Kremlin announced that Russian President Vladimir Putin would be attending the meeting in Germany.

Turkey, which has sent troops to back Libya’s government against Hifter’s offensive, is at odds with Greece over oil-and-gas drilling rights in the East Mediterranean.

In November, Turkey and the Libyan government in Tripoli signed a controversial maritime deal delineating a boundary between the two countries in the Mediterranean. Libya has been divided between two competing governments since 2015, one based in Benghazi in the east and the other based in Tripoli.

The agreement would give Turkey and Libya access to an economic zone across the Mediterranean despite the objections of Greece, Egypt and Cyprus, which lie between the two geographically.

Greek Foreign Minister Nikos Dendias, speaking after meeting with Hifter, said the Greek government had encouraged the Libyan general to “participate (in the Berlin meeting) constructively” and to work toward achieving a cease-fire and restoring security in Libya “by removing mercenaries and by the recognition of the invalidity of the illegal agreements” between Turkey and the government in Tripoli.

“l must tell you with great pleasure that the commander agreed to all of those remarks,” Dendias said. The minister said Greece was willing to help police a European ban on arms shipments to Libya.

Hifter made no comments after his talks with Dendias or a later meeting with Greek Prime Minister Kyriakos Mitsotakis.

Mitsotakis, who was not invited to Berlin, said late Thursday that Greece “will never accept a political solution for Libya that does not require the cancellation” of the maritime deal with Turkey. “We will use our veto before the case gets to the summit meeting. We will veto it at a foreign ministers’ level,” he said.

However, it was unclear exactly what Greece could block. A Greek official, speaking on condition of anonymity, said the veto would be applied to “any decision concerning Libya on a European level if it doesn’t include the annulment” of the maritime deal.

Seibert said the “substance of the conference” was considered when determining who would attend.

“Those international actors with immediate influence in the Libya conflict are taking part in this conference and that’s the focus of the event,” he said.

In Moscow, the Kremlin said Sunday’s Berlin talks would focus on a cease-fire and the launch of a broad political dialogue under the United Nations.

Russia and Turkey held talks with the warring sides in Moscow on Monday, focusing on a cease-fire agreement. Hifter and Fayez Sarraj, the head of Libya’s UN-recognized government in Tripoli, didn’t meet directly and held separate talks with Russian and Turkish diplomats and military officials.

Russia’s acting foreign minister, Sergey Lavrov, said Friday the most important outcome of the talks was that the truce was still holding in Libya.

Turkish President Recep Tayyip Erdogan, however, expressed doubt that Hifter would abide by any cease-fire.

“This man is not a trustworthy man,” he told reporters in Istanbul on Friday. “Yesterday, they continued to bomb Tripoli.”

Erdogan, who will be attending the meeting in Berlin, said Turkey would monitor Hifter’s actions following the conference.

“My hope is that he will stand behind the promise he made,” Erdogan said.

Apart from the maritime deal made with the government in Tripoli, Turkey has also reached a security cooperation agreement with Libya and has sent troops to support the UN-backed government there.

Rights groups have urged participants at the summit to work toward reaching a lasting peace deal.

Amnesty International said any deal must prioritize “protection of civilians and justice for victims of violations.” In a statement, it said a field investigation it released in October had “unearthed evidence of potential war crimes by both the UN-backed Government of National Accord and the LNA,” Hifter’s Libyan National Army.

The United Nations Children’s Fund called on leaders attending the summit to reach a peace deal that would end the “dire and untenable” situation of children in Libya. UNICEF said 150,000 people, including 90,000 children, have been forced to flee their homes since Hifter launched his offensive in April.

The Libya director of the International Rescue Committee, Thomas Garofalo, said in a statement that violence had forced the group to stop some of its relief operations in recent weeks for those displaced by the conflict.

“We call upon all parties gathered in Berlin to ensure that all civilians, including migrants and refugees, are protected in line with International Humanitarian and Human Rights Law,” he said.

Separately, The UN Support Mission in Libya called Friday for the immediate release of Libyan lawmaker Seham Sergiwa, who was kidnapped by gunmen from her house in Hifter’s stronghold, the eastern city of Benghazi, in July. Her whereabouts remain unknown.

The UNSMIL said Sergiwa’s “enforced disappearance constitutes an attempt to silence one of Libya’s prominent female voices and to intimidate others seeking to participate in the country’s political life.”

The statement held the eastern government responsible for establishing her whereabouts.

Following her disappearance, the Tripoli-based government accused forces loyal to Hifter of kidnapping her after she sharply criticized his offensive on Tripoli. The pro-Hifter, east-based government dismissed the allegations and said an investigation was underway to find Sergiwa.