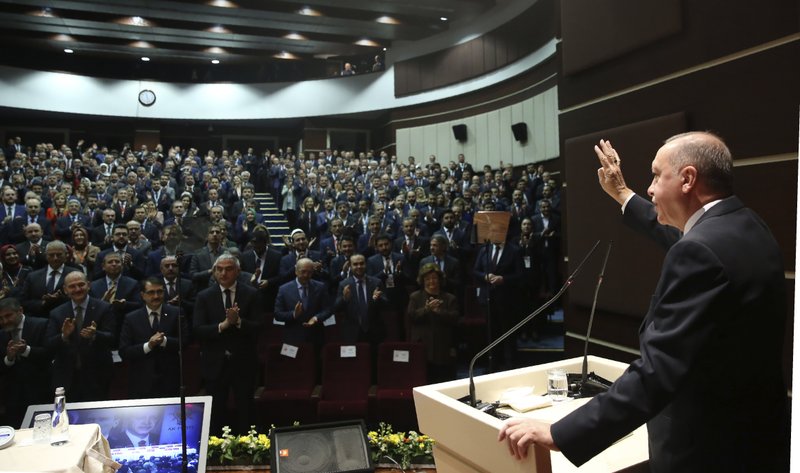 Turkey’s willingness to dispatch troops to Libya is “unacceptable” and such a move would constitute unwanted meddling in the affairs of a friendly country, the speaker of the North African country’s parliament said Saturday.

Aguila Saleh said in a joint statement with his Cypriot counterpart that Turkey’s actions are increasing tensions and destabilizing the region.

Saleh and Cypriot parliamentary speaker Demetris Syllouris also reiterated their condemnation of a maritime border agreement that Turkey signed with Libya’s Tripoli-based government — but which hasn’t been ratified by the Libyan parliament — as a “flagrant violation of international law that’s devoid of any legal basis.”

According to the Cyprus News Agency, Saleh said Prime Minister Fayez Sarraj isn’t authorized to sign any agreements on his own because any such deal requires unanimous approval from the nine-member presidential council and parliament’s assent.

Sarraj is battling an offensive launched in April by the rival government based in eastern Libya and forces loyal to commander Gen. Khalifa Hifter, who is trying to take Tripoli, the capital.

The fighting has threatened to plunge Libya into violence rivaling the 2011 conflict that ousted and killed longtime dictator Moammar Gadhafi.

Speaking through an interpreter, Saleh said Turkish President Recep Tayyip Erdogan took advantage of the divisions within Libya, as well as Tripoli’s control by “terrorist groups,” to get the agreements approved.

According to Saleh, Erdogan’s aim “is to provoke countries in the eastern Mediterranean and to interfere in their exclusive economic zones without taking account these countries’ sovereign rights at sea and in the air.”

A senior Cypriot government official told The Associated Press that Saleh asked European Union member Cyprus to convey to the 28-member bloc that deployment of Turkish forces in his country would destabilize the entire region. The official spoke on condition of anonymity because he’s not authorized to disclose details of the Libyan official’s visit.

On a surprise visit to Tunisia earlier this week, Erdogan reiterated that his county would evaluate sending soldiers to Libya if there is an invitation from Tripoli, where Sarraj’s United Nations-supported but weak administration is based.

Turkey has signed maritime and agreements with the Libyan government that controls Tripoli and some of the country’s west.

The military deal allows Ankara to dispatch military experts and personnel, along with weapons, despite a U.N. arms embargo that has been violated by other international actors.

Turkey contends the maritime agreement gives it economic rights to a large swath of the eastern Mediterranean sea. Greece, Cyprus and Egypt have denounced the deal as legally invalid as it encroaches on their maritime borders.

In Rome, asked about possible Turkish military action in Libya in support of Sarraj’s forces, Italian Premier Giuseppe Conte said he had tried to discourage any attempt at a military solution for Libya.

Conte, who discussed Libya with Erdogan in a phone call last week, told reporters Saturday that a “proxy war” in the North African country across the Mediterranean from Italy would only aggravate the “incredible fragmentation” there.

Conte called for stepped-up diplomatic pressure for a political solution, and said Italian Foreign Minister Luigi Di Maio might soon return to Libya to work for a “cessation of hostilities.”