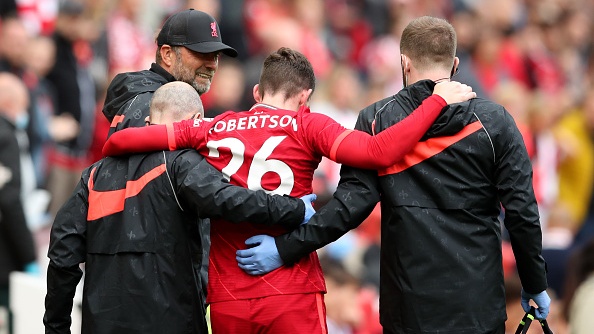 Liverpool manager Jurgen Klopp checks on Andy Robertson of Liverpool as he leaves the pitch with an injury during the pre-season friendly match between Liverpool and Athletic Club at Anfield. (Photo: Agencies)

Liverpool may be without full-back Andy Robertson for the start of the Premier League season after the Scotland international suffered an ankle injury in their 1-1 draw against Spanish side Athletic Club at Anfield on Sunday.

The 27-year-old limped out of the game at the end of the first half after sustaining a knock while trying to block a cross.

Diogo Jota had scored first for Liverpool with Alex Berenguer equalizing for Athletic Club in the second half of a game that was played in front of a 75 percent capacity at Anfield, the biggest crowd at the ground since the start of the COVID-19 pandemic.

Liverpool issued a statement saying Robertson will undergo a scan on Monday to determine the extent of the injury.

Reds manager Jürgen Klopp, in his post-match press conference, refused to be drawn into the severity of the injury.

"It was pretty painful and that's why Andy went off. You probably saw it on the TV pictures better than we did, but he got the ball, the ball on the front of his foot, (and) twisted the ankle," Klopp said.

"The pain settled already, but we cannot say anything further without further assessment tomorrow. He has to get a scan and then we will know more."

Despite Robertson's injury, Liverpool fans will have been delighted to see Virgil van Dijk, Joel Matip and Naby Keita all impress having endured lengthy spells on the sidelines last season.

Liverpool will play another Spanish side, Osasuna, in their final preseason match before they begin the new Premier League season against Norwich on August 14.