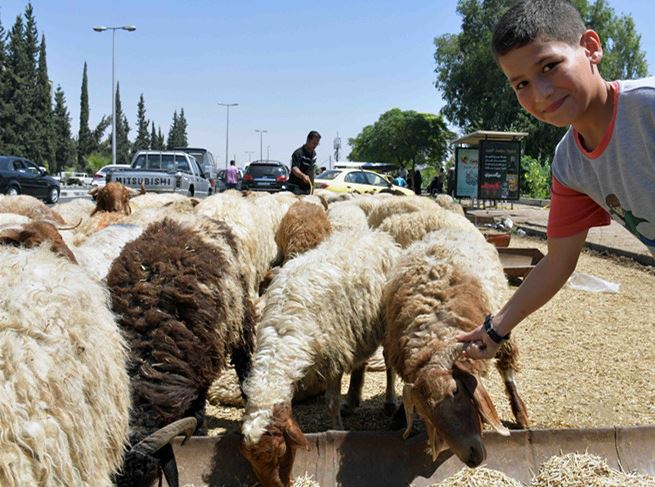 A boy touches a sacrificial sheep at a livestock market during the Muslim festival Eid al-Adha in the capital Damascus on Aug.22, 2018. (Photo: Xinhua)

Following the progress of the Syrian army in recaptured areas that are rich in livestock, the prices of sacrificial sheep has decreased this year in comparison with previous years by 24 percent for each kilogram.

This decrease in price and the improvement in the overall security situation have been conducive in encouraging Syrians to revive the tradition of sacrificing sheep on the occasion of Eid al-Adha, or Feast of Sacrifice.

Sacrificing sheep at this time every year has been a tradition as Muslims commemorate Prophet Ibrahim's willingness to sacrifice his son before God intervened to provide him with a sheep instead, according to the Islamic belief.

During the more than seven-year-long war, the areas that were rich in livestock were lost to an array of rebel groups, including the Islamic State (IS) and the al-Qaida-linked Nusra Front.

As a result, the prices of sacrificial animals have increased as well as anything else, making it difficult for people to make ends meet, let alone observing the yearly tradition of Eid al-Adha.

However, this situation has changed in recent months, as the Syrian army has restored the entire countryside of Damascus, including Eastern Ghouta in May.

The army also managed to recapture much of the southern region in Syria in recent weeks, including Daraa province.

In November 2017, the army restored the capital city of Deir al-Zour province and much of the countryside of that province from the IS.

Ahmad al-Deiri, a livestock trader, told Xinhua that the rebels used to take extra money from the livestock traders to allow the sheep to be taken to the government-controlled parts when they were in control.

"Now, we can move sheep from one place to another freely after all these areas have been liberated and the roads were opened. The situation has largely improved in comparison with previous years and more people are showing up this year to buy sheep," he said.

Aref al-Numan, one of the people who was buying a sacrificial sheep at a livestock market in Damascus, said that in previous years people were afraid to remain outdoors for a long time for fear of any mortar attack or shelling.

Now, he said people can leave their homes, practice their daily lives and revive the traditions of Eid al-Adha without fears.

"Of course the improvement in the security situation and the stability that has been achieved positively reflected on all aspects of life, including the prices of the sacrificial sheep. This is why you see more people buying sheep this year and I am one of them," he told Xinhua.

Zuhair al-Ez, a butcher, told Xinhua that the increase in the prices reflected well on his job, adding that he was amazed by the number of people showing up this year.

"I am happy this year, not only because I am having more customers, but because it reminds me of the days before the war and now my hope grow bigger that we will return as peaceful as we used to," he said.

The situation of the livestock wealth in Damascus and its countryside is good in terms of the availability to meet people's demands as well as low prices in comparison with last year, said Moataz al-Sawah, Vice-Chairman of the Damascus Economic Committee, quoted by the pro-government al-Watan newspaper as saying.

He said the prices decreased 24 percent for one kilogram of mutton this year, adding that two million sheep are available this year.

"This has changed now and the live sheep are available in good and acceptable prices this year in comparison with previous years," he said.