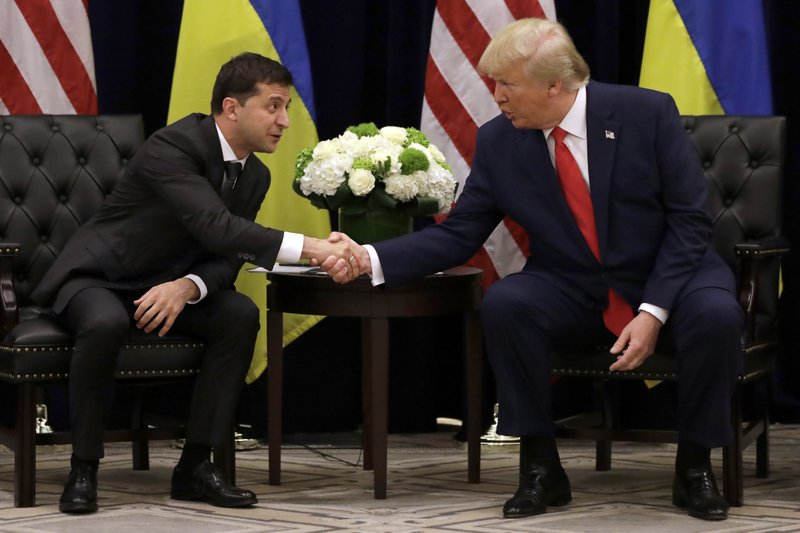 The room features a couple of couches, an extremely old desk and a pair of classic wing chairs by the fireplace. But the location conveys power and instantly elevates the stature of any guest.

Through weeks of impeachment hearings and investigation, the Oval Office has emerged as such a sought-after destination that Ukraine’s new president was hell-bent on getting there and the White House unafraid to dangle it as leverage.

From the moment of his landslide victory last April, comedian-turned-president Volodymyr Zelenskiy single-mindedly pushed for a face-to-face meeting at the White House with President Donald Trump.

It would be a quick win, he thought, and more importantly send a message to his Russian adversaries that the US had his back.

Why the Oval Office or its environs?

“It’s just the optics,” diplomat Kurt Volker explained to House investigators. Beyond the substance of the meeting, “the imagery of the Ukrainian president, you know, at the White House, walking down the colonnade, in the Rose Garden, whatever it might be, that imagery conveys a message of U.S. support.”

It wasn’t just Zelenskiy who was intent on a White House sit-down. Diplomats, White House aides and Ukrainian officials were united in their determination to bring Zelenskiy to 1600 Pennsylvania Ave.

The push for a White House meeting by Zelenskiy is central to what House Democrats allege was a quid pro quo: Trump and his allies made clear that the meeting and millions of dollars in military aid were contingent on Ukraine agreeing to investigate former Vice President Joe Biden and the dealings in Ukraine of Biden’s son Hunter. The proposed tradeoff triggered the whistleblower complaint that led to the impeachment inquiry now imperiling Trump’s presidency.

On its face, an Oval Office visit would seem more perk than substance for a foreign dignitary. But for the untested leader of Ukraine, who inherited a 5-year-old war with Russia-backed separatists, a trip to the White House would demonstrate strength early in his tenure.

“It was important for him, because he wanted to let Vladimir Putin know that his relationship with Trump was going to be a strong one,” said Ivan Katchanovski, a Ukraine expert at the University of Ottawa.

Over the nearly three years of his presidency, Trump has flattered and cajoled dozens of foreign leaders with meetings at the White House and at his Mar-a-Lago resort in Florida.

His hearty, white-knuckled handshake with France’s Emmanuel Macron went viral. Trump informed China’s Xi Jinping that the US military had launched missiles against Syria as they ate chocolate cake at Mar-a-Lago. And he angered lawmakers on both sides of the aisle last month by offering Turkey’s Recep Tayyip Erdogan a November visit, extending the invitation just one day after pulling back US troops supporting Syrian Kurdish forces in northwest Syria. Days after US troops withdrew, Erdogan launched a military operation against the Kurdish forces.

For Zelenskiy, a White House meeting would have been enormously valuable.

“Even though we may throw those around like candy, they didn’t read it as that,” said Gordon Sondland, the US ambassador to the European Union and a central figure in the impeachment inquiry.

Trump has long harbored unproven suspicions that Ukraine conspired to undercut his candidacy during the 2016 election. He kept Zelenskiy’s predecessor, Petro Poroshenko, at arm’s length.

Uncertainty about Trump’s commitment to Ukraine was heightened when Poroshenko visited Washington in June 2017 and was granted only a brief “drop-in” meeting with Trump in the Oval Office.

It was a starkly cooler reception than Trump gave Russian Foreign Minister Sergey Lavrov and Moscow’s ambassador to Washington, Sergey Kislyak, weeks earlier when Trump met with them in the same location.

Zelenskiy’s prospects with the Americans became increasingly complicated as Trump administration officials eventually put a hold on the release of $391 million in military aid. Administration officials wanted Zelenskiy to state publicly that his government was investigating the Bidens before the money would be released or a meeting with Trump scheduled.

Diplomats saw a sit-down between Trump and Zelenskiy as crucial to improving relations between the two nations. Their long effort to make it happen has been laid out in testimony before the impeachment investigators.

“We hoped that such a meeting would help undo President Trump’s long-held view of Ukraine as a corrupt country,” foreign service officer Catherine Croft told legislators.

Sondland, for his part, told investigators that he and other members of a delegation to Zelenskiy’s inauguration in May told White House officials upon their return that they wanted to arrange an Oval Office visit for the new president.

But Trump said he was skeptical that Ukraine was serious about anti-corruption reforms and told Sondland and others to instead talk to his personal lawyer, Rudy Giuliani, about his concerns. Trump “went on and on and on about how Ukraine is a disaster and they’re bad people” and insisted they interfered in the 2016 election, Sondland said.

“I was kind of pissed, actually,” he added, laying out the bind facing diplomats.

“Based on the President’s direction, we were faced with a choice: We could abandon the goal of a White House meeting for President Zelenskiy, which we all believed was crucial to strengthening U.S.- Ukrainian ties and furthering long-held U.S. foreign policy goals in the region,” Sondland said. “Or we could do as President Trump directed and talk to Mr. Giuliani to address the President’s concerns.”

Sondland, however, was surprised that days after Trump pushed back against the advice to host Ukrainian leader, Trump “sent essentially an unconditional invitation to President Zelenskiy to come visit him at the White House.”

At a July conference in Toronto, foreign service officer Christopher Anderson recalled, Zelenskiy spoke of reforms Ukraine had already underway and pressed the American delegation to firm up a date for the White House visit.

“The Ukrainians remained focused on scheduling a White House visit — seeing such a visit as a critical step in empowering Zelenskiy in his negotiations with the Russians,” Anderson said.

Trump and Zelenskiy did eventually meet in September on the sidelines of the UN General Assembly. Even then, though, Zelenskiy gently needled Trump in front of reporters that he was waiting for a date for their White House meeting.

“You invited me, but I think — I’m sorry. ... But I think you forgot to tell me the date,” Zelenskiy told Trump.

Trump said his staff would be in touch.