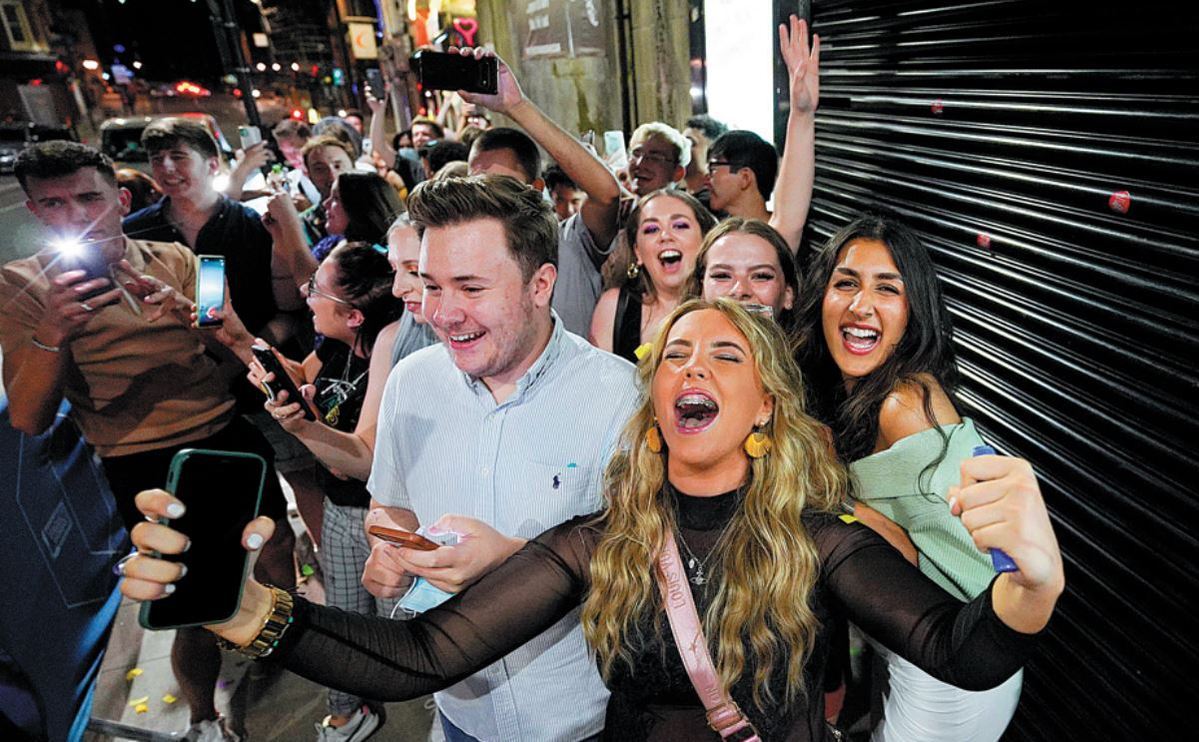 Revelers wait in line outside a pub in Leeds on Sunday night to count down to midnight and the end of novel coronavirus restrictions in England. Britain has made the move despite having the world's seventh-highest COVID-19 death toll, at 128,708. (Photo: Agencies)

Many COVID-19 restrictions in England have been lifted, despite the government admitting that case numbers will rise as a result, and three prominent Cabinet members being forced to spend the so-called Freedom Day self-isolating.

Social distancing rules no longer apply and face coverings are no longer mandatory, although Transport for London says they remain compulsory for passengers, and many shops are requesting that customers wear masks.

On Saturday, Health Secretary Sajid Javid reported that he had tested positive and would be self-isolating. The following day, it emerged Prime Minister Boris Johnson and Chancellor of the Exchequer Rishi Sunak had come into contact with him, but would not self-isolate as they were taking part in a daily testing pilot program not yet available to the general public.

Housing Secretary Robert Jenrick appeared on Sky News to justify this, saying "this is a pilot being used by around 20 organizations…we'll be learning from it", but within hours, after an angry response from the public and political opponents, it was announced the pair would be isolating, with Johnson saying he "did look briefly at the idea" of taking the alternative route, before deciding it was "far more important that everybody sticks to the same rules".

The opposition Labour Party's shadow health secretary, Jonathan Ashworth, said there must be more clarity, telling Sky News it was "absolute chaos. It really was one rule for them and one for the rest of us".

"They've only U-turned because they've been caught out by this," he said, adding that there were "lots of questions about what this trial is (and) who can access it".

Labour leader Keir Starmer called the decision to get rid of all remaining rules at one time reckless.

"We can already see that the infection rates are going through the roof, we know what's going to happen with hundreds of thousands of people being asked to self-isolate," ITV News quoted him as saying.

"The prime minister is essentially putting the whole nation into a car, pressing the accelerator and taking the seatbelt off ."

Currently, across the whole of the United Kingdom, there are around 50,000 infections per day, a figure that scientists have warned could rise as high as 200,000 later in the summer.

In a video message on Twitter, Johnson insisted now was the correct time to move out of lockdown, but urged people to exercise caution.

"But we've got to do it cautiously. We've got to remember that this virus is, sadly, still out there. Cases are rising, we can see the extreme contagiousness of the Delta variant."

Speaking to BBC One's Breakfast program, Zahawi said it was important to strike a balance between caution and progress, and added that one of the next issues to be looked at would be vaccinations for children aged 12 and older.

Following advice from the government's Joint Committee on Vaccination and Immunization, or JCVI, he said he would be making a statement in Parliament about child vaccinations.

He did not, however, indicate that the government intends to change the rules about self-isolation for people who have had both doses of the vaccine.

From Aug 16, double-vaccinated people will no longer have to self-isolate, and despite pleas from business, that date is unlikely to be brought forward, in order to allow more people to be vaccinated.

The managing director of high street food chain Iceland told the BBC his company had around 4 percent of its entire workforce in isolation at the moment.

"We have just announced employing an additional 2,000 people on top of that to give us a deeper pool of labor," said Richard Walker.

"A number of stores have had to close and the concern is that as this thing rises exponentially, as we have just been hearing, it could get a lot worse, a lot quicker. We have got a 50 percent increase week-on-week in terms of people off and it's a 400 percent increase compared to mid-June."