Lockdown is hard, but uncontrolled COVID-19 is worse: Australian experts

SYDNEY, July 20 (Xinhua) -- Lockdowns can affect people's health, but a COVID-19 outbreak is worse, according to Australian and international researchers who have reviewed pandemic responses in countries with and without lockdowns. 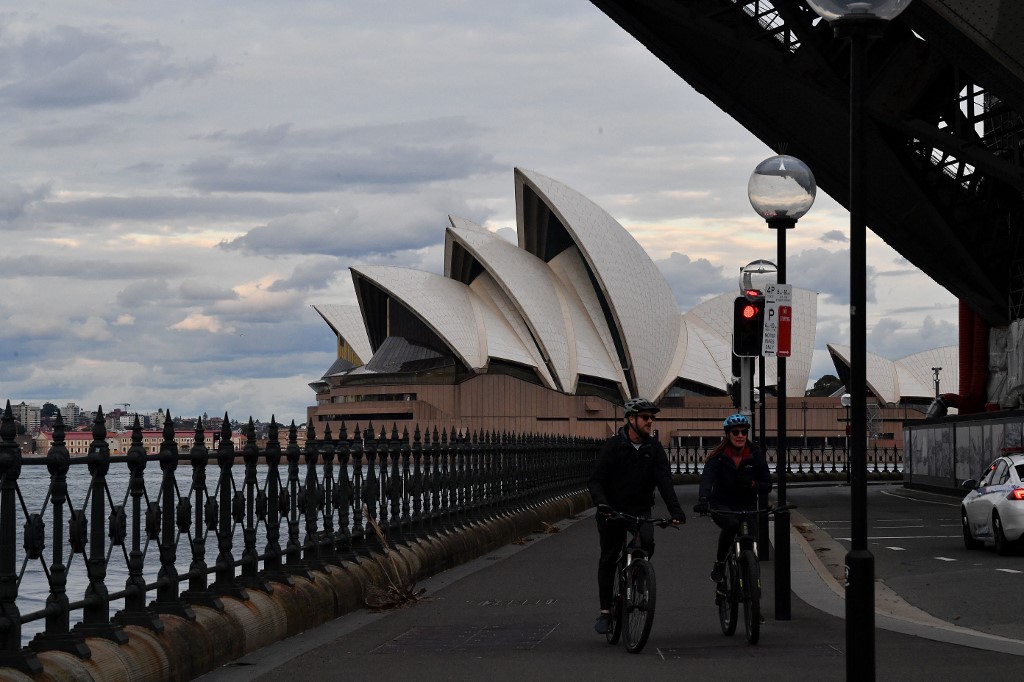 Cyclists ride along a quiet walkway under the Harbour Bridge in Sydney on July 19, 2021, amid a lockdown in Melbourne and Sydney as Australia seeks to contain a surge in coronavirus cases. (File photo: AFP)

The research team, including Australia's University of Wollongong (UOW) and James Cook University (JCU), found this was "challenging" to determine but "it is unlikely that government interventions have been worse than the pandemic itself in most situations".

Their research, published in BMJ Global Health on Monday, looked at the impact of lockdowns on deaths, health services, global health programs, suicide and mental health, by using the World Mortality Dataset (WMD), which accumulated statistics from 94 countries and regions.

The findings indicate that, while there may be multifaceted impacts of intensive government restrictions, including social and economic costs, these are not apparent in short-term increases in mortality. In fact, the WMD appeared to show that countries with concerted COVID-19 restrictions have had fewer deaths than in previous years, with the authors estimating that lockdowns may reduce annual mortality by three to six percent from eliminating influenza transmission alone.

These findings have been supported by Australian Health Minister Greg Hunt who told reporters on Tuesday that there had been no deaths from influenza in the nation this year and only 408 diagnosed cases so far.

"In an average year, over the last five years, at this stage, we would have had 53,000 diagnosed flu cases and 157 lives lost," Hunt said, saying the result was an "important by-product" of the COVID rules.

Places that locked down before a major epidemic (such as Australia and New Zealand) have not had large numbers of deaths, while places with few restrictions such as Brazil, Sweden and much of the United States, have suffered high death tolls, according to the research.

"We found that although lockdowns are undoubtedly associated with health harms, their impact on health is unlikely to be worse than the impact of the COVID-19 pandemic itself," said Dr Lea Merone from JCU and the University of Queensland (UQ).

Researchers said, the severe loss of life that comes with an uncontrolled pandemic and the resulting anxiety, grief and depression seems to outweigh the psychological effects that come with the social isolation caused by a lockdown.

But they added that although stringent control measures will be accompanied by negative consequences in many sectors of the economy, "it is often extremely difficult to separate the potential impacts of lockdowns from those of the pandemic itself."

While the relationship between mental health and lockdowns is commonly discussed, researchers found it is "extremely challenging" to ascertain whether these psychological issues were caused by government interventions or driven by the underlying stresses of the pandemic itself.

The equally important link between major COVID-19 outbreaks and depression and anxiety is often overlooked, the authors add.

Whether the lockdowns are responsible for reduced access to healthcare services, which can cause health problems in the long term, is another component of the equation for the experts to determine.

They certainly do not conclude that lockdowns cannot be harmful. "Often the most that it is possible to say is that there are harms associated with both large COVID-19 outbreaks and government interventions to prevent the disease," they said. "The causal relationships are, unfortunately, extremely difficult to untangle."