The lockdowns introduced by European nations in March to arrest the spread of the novel coronavirus had a massive impact on threatened and endangered species of plants, birds and other animals, with several reestablishing themselves after decades of decline. 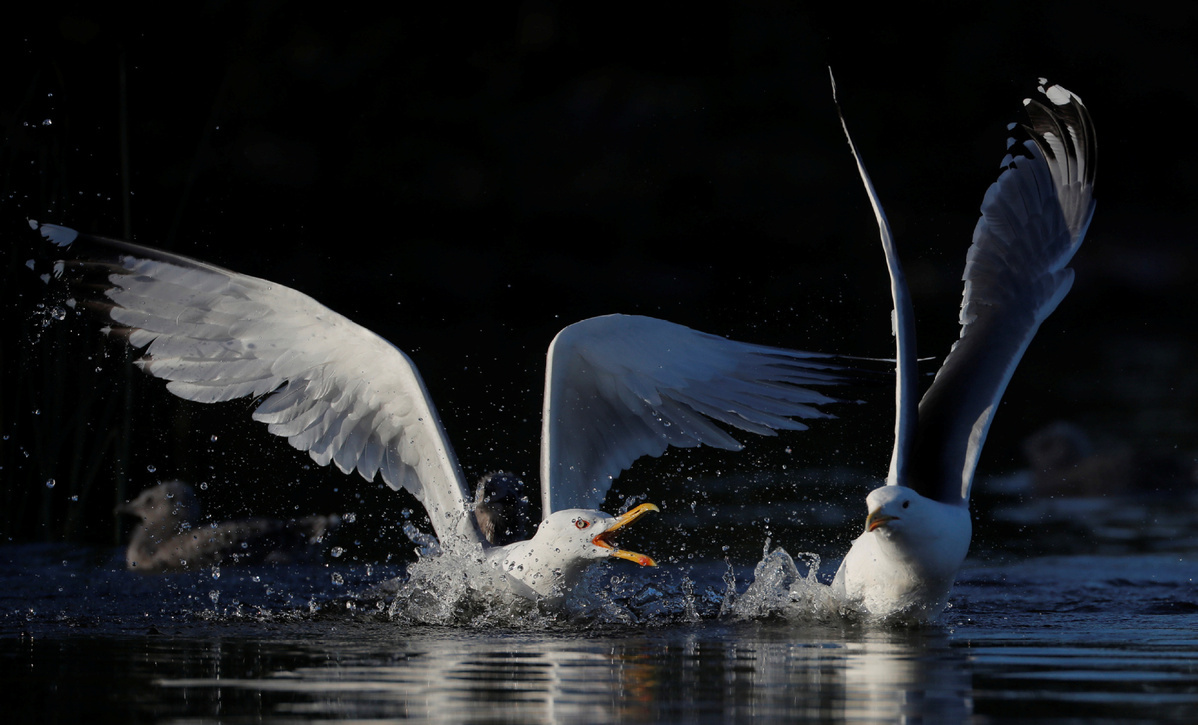 Gulls fight in their colony on an island in a reservoir near the town of Vileika, Belarus June 6, 2020. [Photo/Agencies]

An example of the boost that wildlife got from human beings spending a lot more time at home is the peregrine falcons nesting in the ancient ruins of Corfe Castle, a crumbling fortress in the English county of Dorset that was built by William the Conqueror in the 11th century.

The rare and graceful bird of prey had not been seen at the castle since the 1980s, but a pair returned a mere eight weeks after the castle's owner, the National Trust, closed it as part of the United Kingdom's novel coronavirus lockdown.

"With the site the quietest it has ever been, the great curtain walls are an ideal spot for these powerful birds, which look for isolated and inaccessible places to build a nest," David Brown, an ecologist working at the castle, told the Guardian newspaper. "Amongst all the uncertainty it has been heartening to see nature colonizing the landscape in our absence."

According to the National Trust, owner of many of the UK's wild areas, within days of the start of the UK's lockdown, goats had ventured from their clifftop homes in northern Wales into the deserted streets of Llandudno. English partridges have set up home in a newly deserted car park in Cambridge. A cuckoo has been heard in Osterley Park in West London for the first time in 20 years.

The National Trust said people will be prevented from encroaching on newly reestablished flora and fauna when the lockdown ends.

The trust has reported stoats, weasels and hares venturing into ordinarily crowded gardens at Plas yn Rhiw manor house in northwestern Wales, and a buzzard has now made its home at a building at Felbrigg Hall in Norfolk.

"Wildlife seems to be enjoying the breathing space," Ben McCarthy, the trust's head of nature conservation, said in a news release. "With less traffic and fewer people, we've heard deafening levels of birdsong and seen famous monuments and formal gardens colonized by wildlife."

The effective increase in the amount of habitat to which animals and birds have access means more food and more opportunities for them to raise young, said Alastair Driver, director of Rewilding Britain.

On the European mainland, seals have colonized beaches that are usually full of tourists, and wild boar have been seen roaming the streets of Italian towns and villages.

Driver said ground-nesting birds have fared especially well because there have been so few dog walkers.

And with less traffic, there has been less roadkill, he told the newspaper Maidenhead Advertiser.

There also has been a boom in the amount of flowers next to roads, as local governments have put their priorities in places other than grass-cutting, and this has benefited insects.

Scientists have used the relative peace and quiet of the lockdown to better understand our bird and animal neighbors, with one group attempting to create the first global public sound map of the spring dawn chorus. They have appealed to people to record birds singing and upload the tracks to their website.

Professor Michael Gorman, director of the Biotopia museum in Munich, Germany, said the lockdown offers a rare opportunity to hear birds that are ordinarily drowned out by the noise of city life.

"Suddenly the natural world could be heard more clearly," he told the Guardian. "It is a moment to stop and listen."

But the lockdown has presented problems for some wild creatures, with scavengers and opportunists missing the garbage that people leave in their wake. And the Daily Mail newspaper has reported some people have even used the lockdown to kill rare and legally protected birds of prey.

The Royal Society for the Protection of Birds said it has had reports of hen harriers, peregrines, buzzards, red kites, goshawks and barn owls being killed by gamekeepers taking advantage of an absence of human observers to illegally shoot birds that they wrongly believe threaten the pheasants their employers raise to shoot for sport.

Mark Thomas, who heads the RSPB's investigations unit, said in a statement: "It is clear that criminals on some sporting estates …have used the wider closure of the countryside as an opportunity to ramp up their efforts to kill birds of prey."

Environmental scientists, meanwhile, say nature conservation should be front and center in plans to rebuild the economy after the novel coronavirus pandemic is over.

In an open letter published in the journal Science, they said that "how we emerge from lockdowns will drive a new world economy", and people can "tip the balance" in favor of nature.