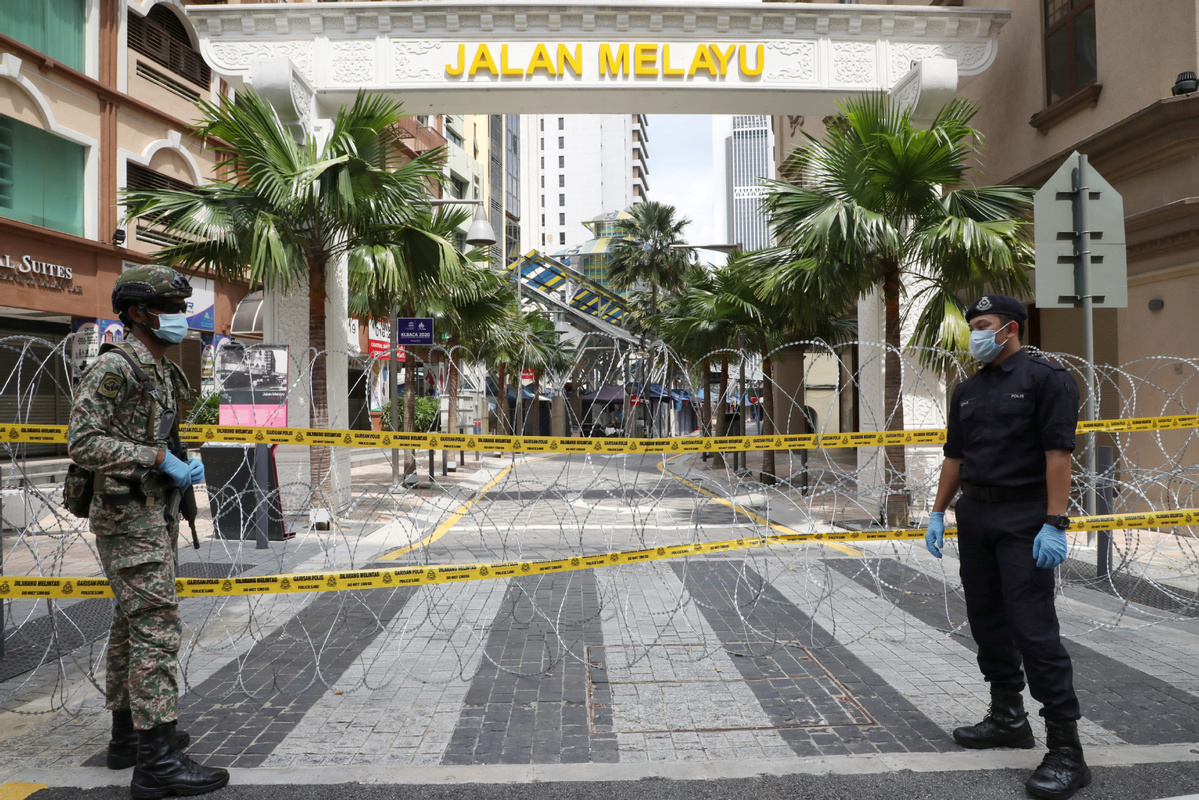 A soldier and a police officer stand guard at an entrance of the red zone under enhanced lockdown, during the movement control order due to the outbreak of the COVID-19, in Kuala Lumpur, Malaysia April 15, 2020. (Photo: Agencies)

Balan Nadarajan has been planting vegetables in his backyard since 2012 for his family to enjoy organic, pesticide-free produce.

During the Malaysian lockdown over the past six weeks, while most of his neighbors and friends queued for hours in grocery stores, Nadarajan had only to go to his garden and harvest whatever his family needed for the day.

"This (lockdown has been) a big push factor for people to grow their own vegetables," said the business development executive, who has held seminars on urban gardening since last year. His experience has also shown why Southeast Asian countries, especially those that depend on food imports, need to invest more in agriculture and food self-sufficiency.

COVID-19 has forced most Southeast Asian governments to lock down their countries to stem the rise of infections. But measures meant to ensure public health safety have also led to disruptions in food supply.

Teng said the outbreak has prompted all countries to ensure food supply chains, "irrespective of whether the food is imported from overseas or moved from one part of the country to another".

He cited Singapore, which started to impose "circuit breaker" measures in April 7 following a rise in its COVID-19 cases. These measures included closing borders and imposing travel restrictions, a challenge for a city-state that imports more than 90 percent of its food.

Despite such assurances, the delivery of food to Singapore was temporarily disrupted as Malaysia also enforced its own lockdown, disrupting the transport of farm produce to both domestic and foreign markets. The Association of Southeast Asian Nations had a total of 129,520 confirmed cases by Saturday, with the region's high of more than 17,000 in Indonesia and its low of 19 in Laos, the World Health Organization said.

The Philippines imports about 1.3 million tons of rice each year, while Brunei imports 90 percent of its rice supply. Thailand and Vietnam, among the world's biggest food exporters, are both net importers of corn and wheat.

Derek Heady, senior research fellow at the International Food Policy Research Institute in Washington, said at a media briefing on April 30 that Southeast Asian countries "need to keep trade channels open". "There's enough food for everybody. It's about keeping the food channels open to make sure that import-dependent countries have access."

The global auditing firm PwC said in a report last month the COVID-19 outbreak is exacerbating the "long-term food security challenges" of ASEAN.

"Supply chains will be increasingly strained by shortages of labor and inputs, as it becomes more difficult for people and goods to move freely. A concerted effort will be required between corporates and governments to keep supply chains open and minimize disruption to the food system and ASEAN communities."

Even before the outbreak, estimates projected that by 2030 more than 90 million people would move to ASEAN cities, with food spending forecast to reach $1.5 trillion. A growing population will also demand safer, healthier and more sustainable food supplies.

But urbanization and climate change have also cut the number of arable farm lands in the region. Farm yields are stagnant and the exodus of young people to the cities has led to a labor shortage in rural areas. COVID-19 may have prompted ASEAN to work on reducing its import dependence.

"It is important that governments and businesses also consider what can be learned from the current crisis over the longer term," the report said.