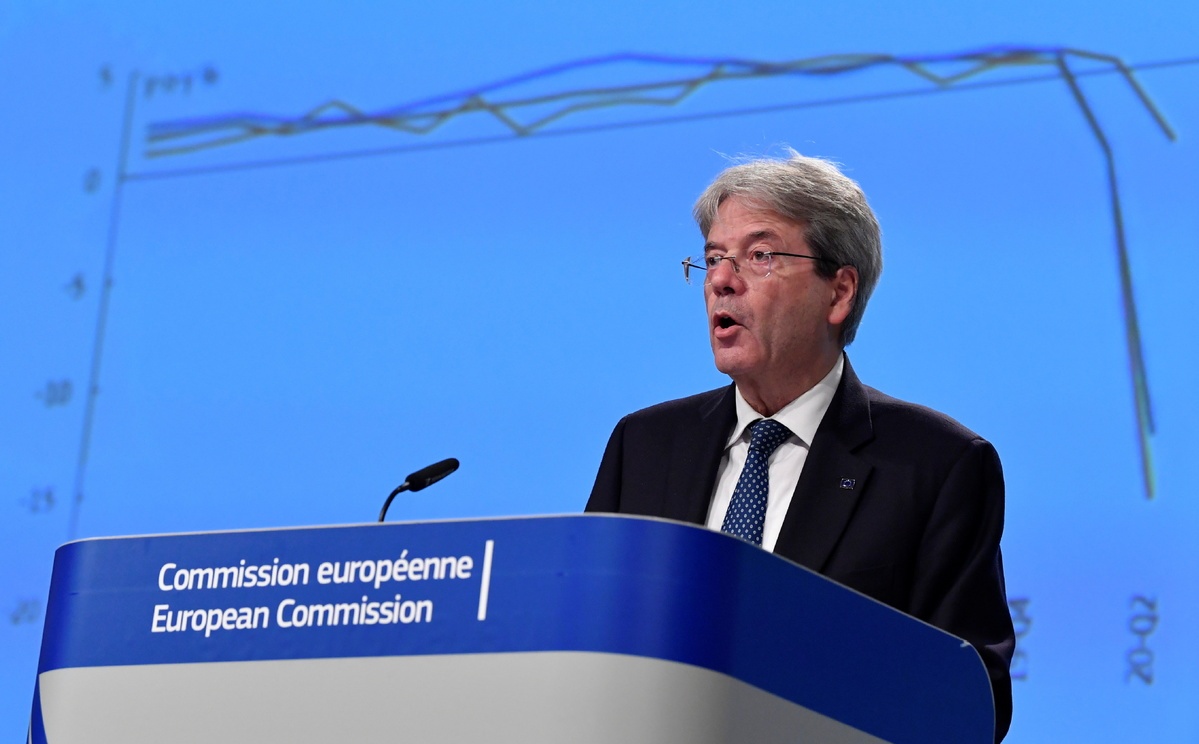 The European Commission has marked down its forecast for economic growth for next year after countries in the region imposed a second round of lockdowns to stem a rebound in coronavirus infections.

"In recent weeks we are facing the resurgence of the pandemic and new containment measures have been taken. The economic rebound has been interrupted," European Commissioner for Economy Paolo Gentiloni said in a statement accompanying the new forecast.

He said growth is set to stall in the fourth quarter of the year but would pick up again in the first quarter of 2021.

For the 27-member European Union, the economy is forecast to contract by 7.4 percent before growing 4.1 percent in 2021, compared with the summer projections of an 8.3 percent contraction in 2020 and growth of 5.8 percent next year.

The growth forecast for both the eurozone and the EU in 2022 is 3 percent.

Gentiloni, a former Italian prime minister, said the forecast implies that GDP for the EU as a whole will be just shy of its pre-pandemic level by the end of 2022.

But he noted that the pandemic is evolving by the day, making any forecast subject to high uncertainty. The World Health Organization has described the European region as the new epicenter of COVID-19.

The economic impact of COVID-19 has differed widely across the EU and the same is true of recovery prospects, reflecting the spread of the coronavirus, the stringency of public health measures taken, the sectoral composition of national economies and the strength of national policy responses, according to the report.

The autumn forecast came after an encouraging report last week that showed the eurozone grew 12.7 percent in the third quarter of this year, after the first wave of the pandemic subsided.

The new forecast expects unemployment in the EU to continue to rise in 2021 as member states phase out emergency support measures and new people enter the labor market. It expects the situation to improve in 2022 as the economy recovers.

The European Commission's Executive Vice-president for an Economy that Works for People, Valdis Dombrovskis, said the bloc has shown resolve and solidarity through the turbulence.

He highlighted that the EU agreed on a 1.8-trillion-euro ($2.1 trillion) landmark recovery package, known as NextGenerationEU, to provide massive support to the worst-hit regions and sectors.

"I call again on the European Parliament and (European) Council to wrap up negotiations quickly for money to start flowing in 2021 so that we can invest, reform and rebuild together," he said.

Separately, negotiators from the European Parliament and the European Council on Thursday reached a provisional deal which stipulates that member states that disrespect the rule of law will risk losing access to EU funds.

The deal is still to be approved by the Parliament and the European Council. Poland and Hungary have clashed with the EU on issues relating to the rule of law.