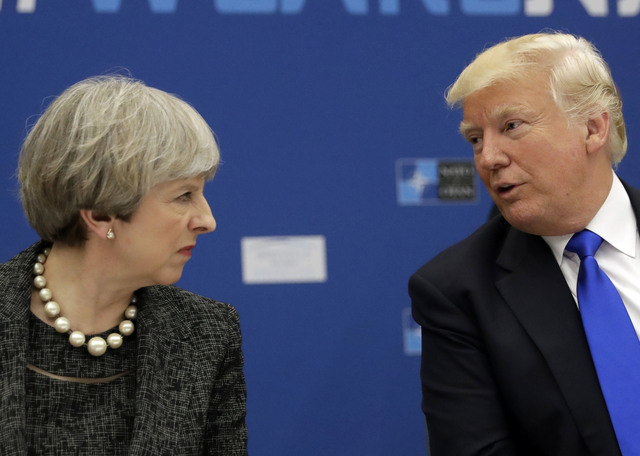 U.S. President Donald Trump, right, speaks to British Prime Minister Theresa May during a NATO summit of heads of state and government in Brussels, May 25. (Photo: AP)

The mayor of London on Thursday added his voice to mounting calls for President Donald Trump's state visit to the U.K. to be canceled over his retweets of a British far-right group.

Sadiq Khan said Trump has promoted "a vile, extremist group" and an official visit by him to Britain "would not be welcomed."

Trump's retweeting of anti-Muslim videos from far-right fringe group Britain First has been widely condemned in Britain. Prime Minister Theresa May's official spokesman said the president was wrong to have done it.

In response, Trump urged May to focus on "the destructive Radical Islamic Terrorism that is taking place within the United Kingdom," rather than on him.

Home Secretary Amber Rudd on Thursday repeated the government's view that Trump had been "wrong" to retweet the videos.

"I hope the prime minister's comments will have some impact on the president," she said.

"This government will not tolerate any groups that spread hate by demonizing those of other faiths or ethnicities," she said.

May has sought to cultivate a close relationship with Trump, visiting him in Washington days after his inauguration in January and extending the offer of a state visit hosted by Queen Elizabeth II.

The Twitter storm has prompted renewed calls for the trip to be called off. Trump had already faced strong opposition in Britain over his attempt to ban travel to the U.S. from several majority-Muslim countries.

Rudd told lawmakers in the House of Commons that the invitation had been accepted and the visit was planned, though "the dates and the precise arrangements have yet to be agreed."