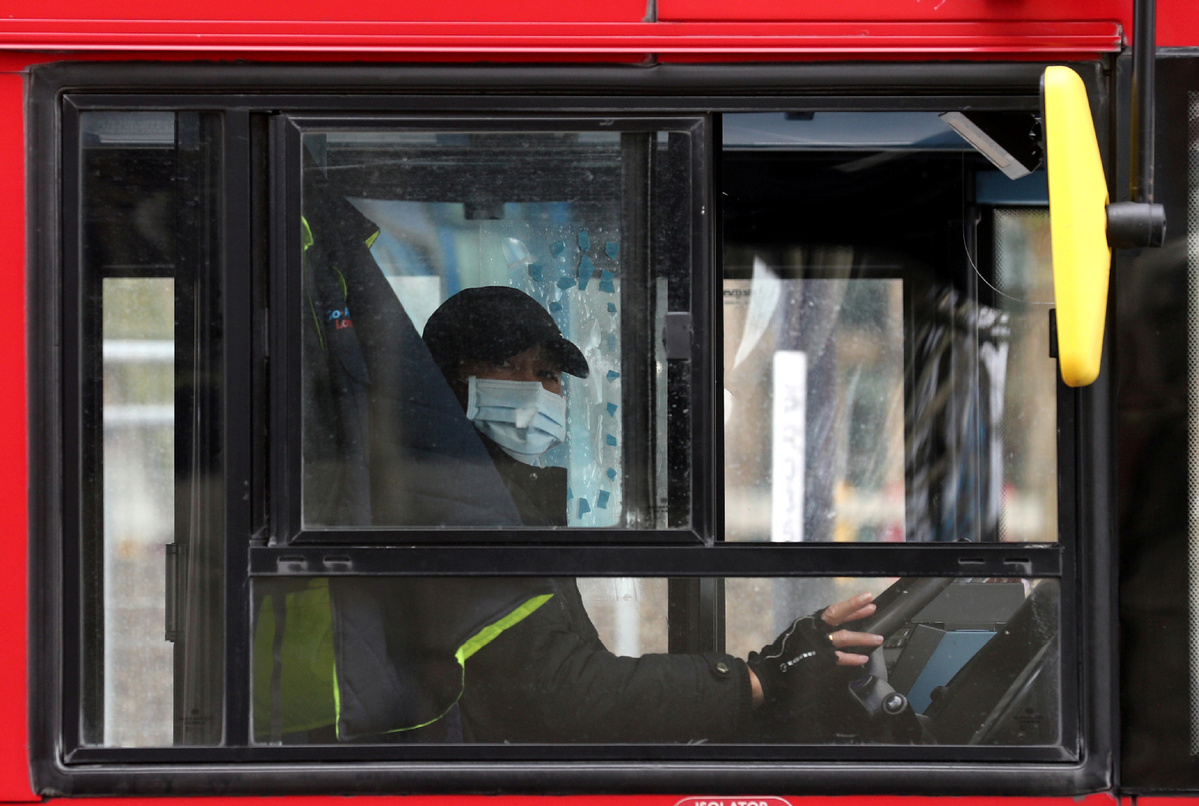 A bus driver wears a face mask, as the spread of the coronavirus disease (COVID-19) continues, in London, Britain, April 6, 2020. (Photo: Agencies)

The United Kingdom's digital secretary will hold a meeting with the heads of major technology companies this week to combat misinformation surrounding novel coronavirus, after unfounded claims spread by conspiracy theorists resulted in attacks on 5G towers.

Oliver Dowden, who is secretary of state for digital, culture, media and sport, will encourage the companies to take measures to prevent false and potentially dangerous information spreading online, according to a report published in The Telegraph newspaper.

UK mobile operator Vodafone has confirmed that there were attacks on four 5G towers in Britain over the weekend. The vandalism is linked to unsubstantiated claims that radio waves emitted by 5G infrastructure can suppress the immune system and that the technology is therefore compounding the COVID-19 outbreak.

"We are aware of inaccurate information being shared online about 5G," the Department for Digital, Culture, Media and Sport wrote on Twitter. "There is absolutely no credible evidence of a link between 5G and coronavirus."

Vodafone Chief Executive Nick Jeffrey told The Telegraph that the police and counter-terrorism authorities have launched an investigation into the attacks.

In an opinion piece published in The Times newspaper last week, Dowden warned of the spread of "fake news, hoax theories and pseudo-science" online.

"Our counter-disinformation unit has seen completely unfounded posts shared on social media," Dowden said. "We're working around the clock with Whitehall departments, the social media platforms, and disinformation specialists in academia to build up a full picture of inaccurate news stories and posts circulating online."

Some media outlets in the UK have quoted Tanja Rebel, an activist who has led anti-5G protests in Britain, claiming that electromagnetic radiation from 5G "suppresses the immune system" and "helps viruses and bacteria thrive". Rebel recently shared an online petition to suspend 5G in the UK, which has gathered more than 45,000 signatures.

"Neither of these theories is backed-up by evidence," Lewis said. "The new coronavirus is also affecting countries and regions where no 5G is present."

Like the previous generations of wireless network technology, including 4G, 3G, and 2G, 5G mobile data is transmitted over radio waves, Lewis explained. To improve speed and capacity, 5G uses a higher frequency of radio waves compared to older generations.

"The frequency of this new wireless technology remains very low," said Lewis. "The maximum levels of electromagnetic radiation measured by (UK communications regulator) Ofcom were about 66 times smaller than the safety limits set by international guidelines."

Public Health England stated in October that there "should be no consequences for public health "associated with 5G.