London police criticised for clashes at vigil for murdered woman 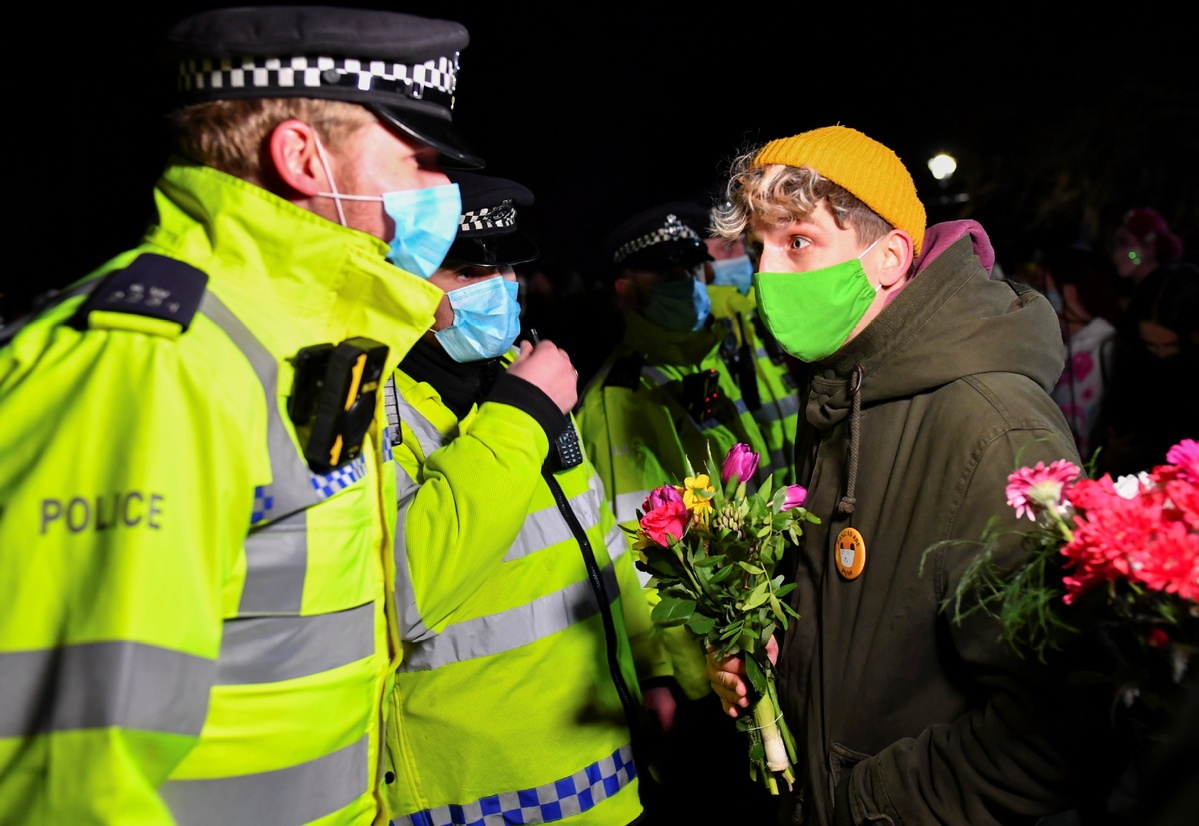 A mourner talks with police officers at a memorial site at the Clapham Common Bandstand, following the kidnap and murder of Sarah Everard, in London on March 13, 2021. (Photo: Agencies)

LONDON - London police faced criticism on Saturday and calls for investigations after clashing with crowds at a memorial for murder victim Sarah Everard whose death has sparked widespread anger and fear about women's safety.

Police told organisers of events to honour Everard planned in London and around the country that public gatherings would be in breach of COVID-19 restrictions and could lead to fines up to 10,000 pounds ($14,000).

Organisers at Reclaim These Streets said they had cancelled a vigil on Clapham Common in south London near where Everard, 33, was last seen 10 days ago. Other events around the country were also cancelled.

But hundreds of women and men - including Kate, Duchess of Cambridge - went to Clapham Common during the day to leave flowers and drawings at a memorial to Everard.

As more people arrived during the evening, some chanting "sisters united will never be defeated", police stormed in and tried to disperse the crowds gathered around a bandstand. Video footage showed scuffles and some women forced to the floor.

"The police have a responsibility to enforce COVID laws but from images I've seen it's clear the response was at times neither appropriate nor proportionate," Khan said on Twitter.

"I'm in contact with the Commissioner & urgently seeking an explanation."

British interior minister Priti Patel said "some of the footage circulating online from the vigil in Clapham is upsetting".

"I have asked the Metropolitan Police for a full report on what happened," she said on Twitter.

Laura, 24, who did not want to give her full name for fear of reprisals, described the scene as "pretty bad" with "a bunch of mostly male officers looking at a crowd of women from the centre of the bandstand".

"We're not threatening anyone, we just want to pay our respects to Sarah," she told the Thomson Reuters Foundation.

"Women came together to mourn Sarah Everard - they should have been able to do so peacefully," he said in a statement.

"I share their anger and upset at how this has been handled.

This was not the way to police this protest."

Everard, a marketing executive, disappeared while walking home from a friend's house at about 9:30pm on March 3. Her body was later found in woods about 50 miles away in southeast England.

Her killing has led many women to share their fears of walking alone and experiences of being harassed or attacked by men in public, with calls for more action to be taken to address violence against women and abuse.

With vigils banned, some women and campaign groups arranged online events and doorstep tributes with candles and lights while others left notes at the memorial on Clapham Common.

"Rest in peace Sarah. You could have been any of us. I hope you get justice," read one sign placed atop flowers.

"It feels like we finally have people's attention, so it was important for me to be here in spite of the ban (on the vigil) and honour Sarah's memory," said Hannah, 29, who asked not to use her full name.

"Groping, insults, being followed ... literally every woman I know has experienced this," she said.

Some women called for defiance and urged people to still head to Clapham Common on Saturday evening despite the ban, using the hashtag #vigilforSarah on social media.

Currently England is in a national lockdown to stem the coronavirus pandemic and people cannot leave or be outside of their homes except with a "reasonable excuse" and can only be outside with one other person.

The head of London's Metropolitan Police, Cressida Dick, said in a video on Twitter that Sarah Everard's death was a "terrible tragedy" that had caused shock and anger and she understood the desire for a major gathering but it was unsafe.

"I do appeal to people to express their sadness and their solidarity and their really strong feelings about women's safety in other ways," she said.