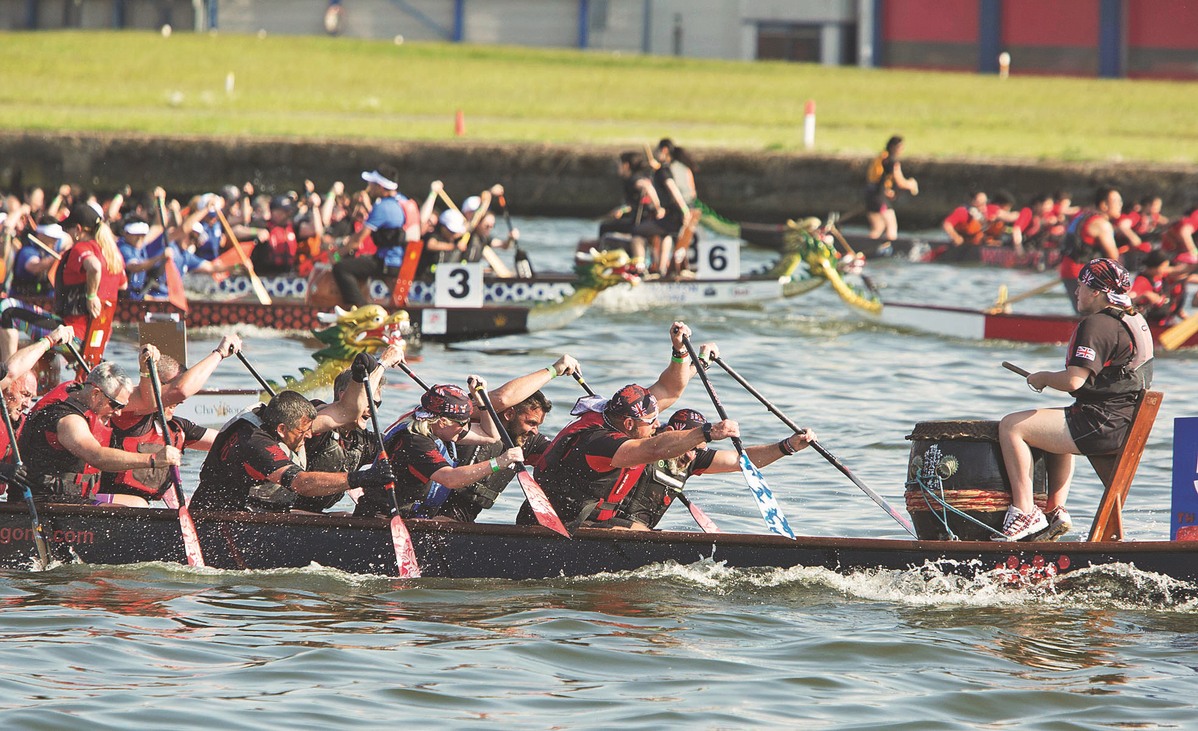 Teams put their backs into paddling dragon boats on the River Thames earlier this month in London's big dragon boat festival. The festival is traditionally held around the world on the fifth day of the fifth lunar month, which is June 18 this year. Photo provided to China Daily

The ancient Chinese tradition of dragon boat racing has evolved into a major international sport with paddlers now taking to the water in competitions all over the world.

In London, thousands support an annual day of races at the Royal Docks, adjacent to the capital’s City Airport, to celebrate and take part in the tradition which dates back over 2,000 years.

The London Hong Kong Dragon Boat Festival is now one of the biggest cross-cultural events in Britain, with the 23rd edition taking place earlier this month.

Teams of paddlers power down the River Thames in long, narrow boats to the rhythmic beating of drums, hoping to win one of five trophies.

The event was founded by the London Chinatown Lions Club 23 years ago, and they have continued as the organisers.

What started out as a small fundraiser for Chinese schools has turned into a major cultural event for London and the Chinese community.

Lawrence Lee, former president of the London Chinatown Lions Club, was part of the committee which set up the event.

“We started off at a much smaller venue in Westferry Road and had food stalls and raffle tickets to raise funds for Chinese schools to print textbooks,” Lee said, “At the time it was called Dragon Boat Fun Day. There were only around 10 to 12 teams.”

But through the years, the competition and interest has grown and the festival had to move to a bigger venue – the Royal Docks.

Around 40 teams now take part, with some 10,000 visitors and spectators soaking up the festivities of music, Asian food stalls and performances.

Lee said he’s proud of how the festival has developed, adding that the event is also a way to keep Chinese identity and culture vibrant in the UK.

He added that such events are well received by the younger British-Chinese generation who are “becoming more involved and more interested in Chinese culture”.

Competitors say dragon boat racing is very much about being part of a team and bringing communities together.

Jackie Lam, captain of the Hong Kong Family team, said, “There are so many people coming from so many backgrounds and it really represents what dragon boat racing means in Hong Kong, about multiculturalism, multifaith. It’s just a great environment of people coming together from everywhere in the world.”

The festival is marked on the fifth day of the fifth month of the traditional Chinese calendar. This year it falls on June 18.

The day commemorates the death of Qu Yuan, a Chinese poet who was born in 343 BC, in the middle of China’s Warring States era.

In despair, Qu drowned himself in a river following the defeat of his homeland capital, now part of modern Hubei. To keep the fish away from his body, villagers took to their boats, beat their drums, and splashed their paddles.

Priscilla To, director-general of the Hong Kong Economic and Trade Office said, “celebrating this traditional festival is part of Hong Kong’s lifestyle and in taking part in this event we join with many other dragon boat festivals taking place around the world”.