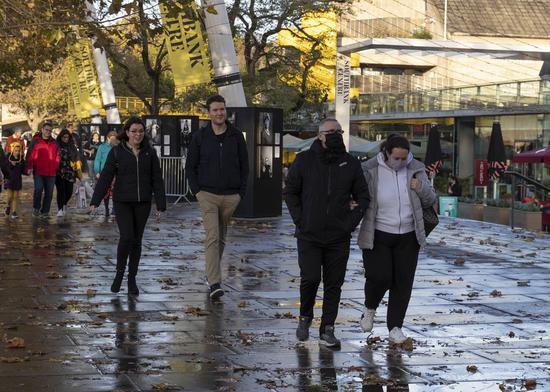 London mayor Sadiq Khan has made an impassioned plea to Londoners to unite at a time of "crisis" as England prepares to enter a second national lockdown to quell the resurgence of coronavirus.

He issued a "direct appeal" to residents of the British capital to follow the latest round of restrictions, moments after Prime Minister Boris Johnson announced Saturday the sweeping shutdown of England which will enter into force Thursday and last until Dec. 2, the London-based Evening Standard newspaper reported.

The mayor thanked Londoners for "the enormous sacrifices you have made over the last seven months" and promised that "our city will get through this together," according to the newspaper.

He conceded that the British government had "done the right thing" by extending the furlough scheme, which was due to end on Sunday, but added that he would continue to lobby ministers to ensure London receives the "financial support it needs," said the report.

"You may not agree with or like the government's latest restrictions. However, we must all follow them," he said. "Please continue following the restrictions and public health guidance. We must act to protect each other."

"I know it won't be easy, but history tells us that Londoners always pull together in times of crisis," he said. "We must once again make huge collective sacrifices now in order to prevent even greater suffering later."

Earlier media reports said that the London mayor launched a furious attack on the British government after it announced the new coronavirus lockdown, warning its "indecision" would have "unimaginable consequences."

"The government's delay means that case numbers are now too high for a short, sharp, circuit breaker to be effective," he said. "This has left the prime minister with no choice but to introduce a longer national lockdown."

"It is absolutely imperative that the government does not repeat its dithering when it comes to the additional economic support that will now clearly be needed," he said.

Under the new tough restrictions announced by Johnson -- second of its kind since the outbreak of the coronavirus pandemic in the country -- pubs, bars, restaurants and non-essential retail will close.

The public will be told to stay at home unless they have a specific reason to leave, but schools, colleges and nurseries will remain open.

The latest move came as the number of Britain's confirmed COVID-19 cases surpassed the one million mark on Saturday.

At present, London is placed in Tier Two alert, or high risk, which prevents households from mixing indoors. Meanwhile, London's R rate, or the reproduction number, is now at 2.86, according to Imperial College London. Across Britain, the R number is now between 1.1 and 1.3, the latest official figures showed Friday.

The R number is one of many indicators scientists use to determine how fast COVID-19 is spreading in the country.

Reproduction rate means the average number of people each person with coronavirus goes on to infect. Therefore, an R number of between 1.1 and 1.3 means on average every 10 people with the virus will infect between 11 and 13 others.

If the R number is above one, it means the number of cases will increase exponentially.

In the last 24 hours as of Sunday morning, 1,568 people have tested positive for COVID-19 in London alone, local media reported.

To bring life back to normal, countries such as Britain, China, Russia and the United States are racing against time to develop coronavirus vaccines.