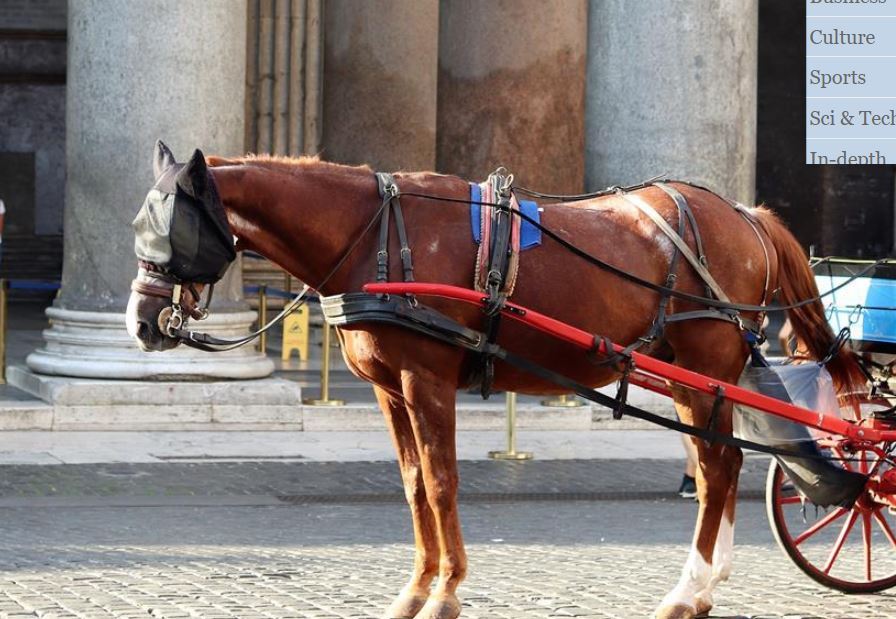 A carriage horse waiting for passengers in front of the Pantheon in Rome, Italy on September 21, 2018. (Photo: Xinhua).

ROME, Oct. 3 (Xinhua) -- Horses have been present on the streets in the Italian capital dating back to even before legend says the city was founded 2,771 years ago.

But a new rule likely to come into force would change that.

Horses are no longer used for transport in most modern cities. But in around two-dozen Italian municipalities, including Rome, they are still used to pull carriages used by tourists.

Rome has 35 such carriages in use, using around 70 horses in total. But a new rule being mulled by the city's mayor, Virginia Raggi, would limit them to the city's big urban parks. The ultimate goal, according to one of the organizers of the initiative, is phasing out the carriages altogether.

"This kind of life is unfairly cruel for the horses, to be trotting on cement all day, breathing in the fumes from vehicles," Nadia Zurlo, head of LAV Equidi, an organization pushing for to phase out carriages, told Xinhua.

Critics of the current rules also say they can cause traffic problems since they move much slower than other vehicles. The problem of dung left behind by the horses was resolved years ago by requiring the animals to leave their stables wearing a manure bag that catches the waste so it can be used as fertilizer.

Details of the new rules are still being worked out, Zurlo said. It is not clear yet which parks will be chosen for the carriages, for example. Rome has three large urban parks -- Villa Ada, Villa Borghese, and Villa Doria Pamphili -- plus many smaller public green areas.

"At least the horses working in parks will breathe clean air and will walk on soft surfaces," Zurlo said.

There is also a proposal to let the carriage drivers, who oppose the change, to convert their license into a license to drive a traditional taxi. The rule change would no longer allow licenses to be sold or handed down to relatives, effectively meaning they would be phased out no later than the retirement of current drivers.

"Making this change will impact the livelihood of the drivers and also take away some of the charm of the city," Fabrizio Romano, one of the carriage drivers, told Xinhua.

Romano has been driving a carriage in Rome for 15 years, using a license he inherited from his father, who started in 1976.

"I think we treat the horses very well," he said. "If someone thinks the steep hills in the city parks will be better for them, it shows they don't understand."

According to Christa Leste-Lasserre, an equine science specialist based in France, there should be a consensus that would satisfy both sides of the debate, provided scientific principles are used to guarantee the horses' welfare.

"Concerns are real, but the solution doesn't have to be removing the horses from the city streets," Leste-Lasserre said in an interview. "Horses are highly adaptable. With good selection, training, health care, and attention to their ethological needs, there's no reason they can't be part of a city's cultural environment."