Prosecutors on Tuesday sought stiff sentences from five years to life in jail for 14 suspected accomplices of the Islamist gunmen who murdered cartoonists and killed hostages at a Jewish supermarket in Paris in 2015. 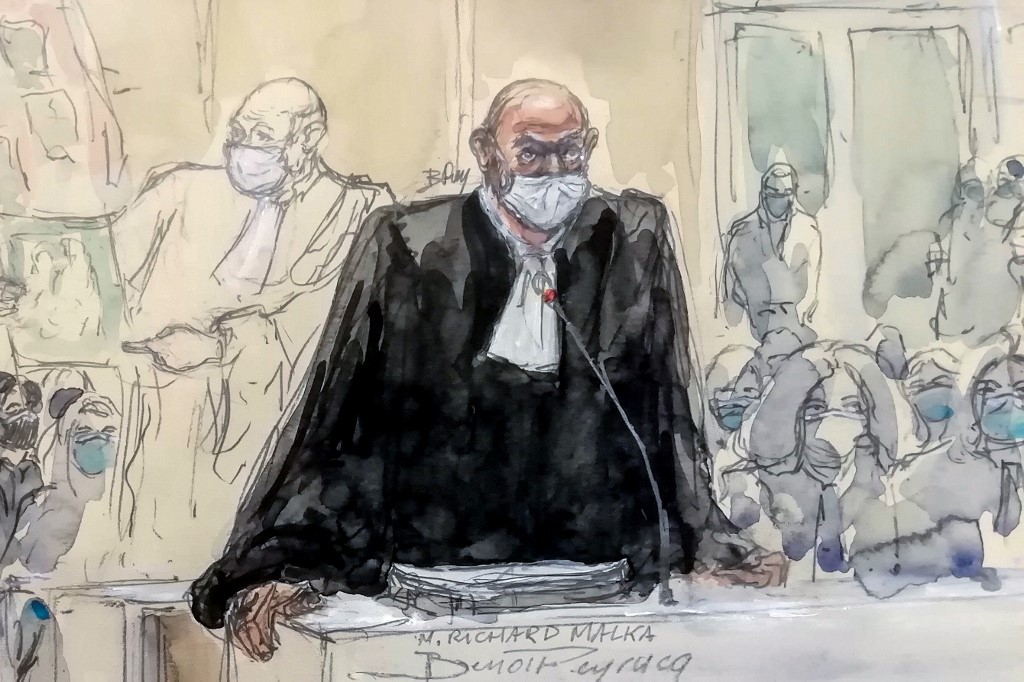 This courtroom sketch created on December 4, 2020, shows Charlie Hebdo's lawyer Richard Malka at the "Tribunal de Paris" courthouse in Paris during the trial of 14 people suspected of being accomplices in the Charlie Hebdo and Hyper Cacher jihadist killings. (Photo: AFP)

Sixteen people were killed in the attack at Charlie Hebdo satirical magazine, which had published cartoons of the Prophet Mohammed and during a hostage-taking three days later.

One of the three assailants, all of whom were killed by police in shootouts, also shot dead a policewoman.

Those on trial since September are accused of providing varying degrees of logistical support to Charlie Hebdo killers Cherif and Said Kouachi and supermarket hostage-taker Amedy Coulibaly. They deny the charges.

Three of the fourteen suspects, who range in age from 29 to 68 and include Coulibaly's girlfriend Hayat Boumeddiene, are being tried in absentia.

Boumeddiene fled to Syria shortly after the attacks. Her whereabouts is not known.

Prosecutors sought a life term for Ali Riza Polat, a 35-year-old French-Turkish national, presented during the trial as Coulibaly's "right-hand man" accused of helping him and the Kouachi brothers secure weapons.

Polat admitted to the court he had taken part in various "scams" but denied any knowledge of what Coulibaly, who had sworn allegiance to the Islamic State group, and his accomplices were planning.

Polat's co-accused, including two men who spent time in jail alongside Coulibaly, also denied any hand in the attacks and rejected allegations of being radicalised.

The killing of the cartoonists caused deep shock in secular France, which has a tradition of anti-clerical satire.

The attacks marked the start of a long series of terror assaults in France, many of them carried out by young French devotees of Islamic State.

After the start of the trial, the cartoons were at the centre of another deadly attack in October, with a young Chechen refugee beheading teacher Samuel Paty for showing some of the caricatures to pupils in a class on free speech.