Prime Minister Boris Johnson's director of communications resigned on Wednesday, a move that suggested tension at the heart of government as Britain prepares to complete its Brexit journey out of the European Union. 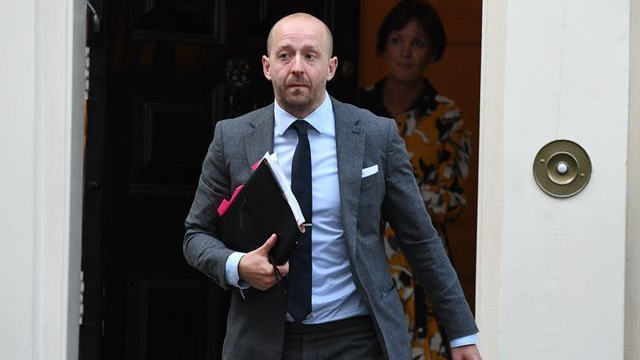 Lee Cain has been a loyal ally of the prime minister, working for him since he was foreign minister until 2018 and staying by his side, sometimes without pay, when Johnson resigned over his predecessor Theresa May's Brexit plans.

Cain is also close to Johnson's senior adviser Dominic Cummings after working with him in the Vote Leave campaign to quit the EU, a partnership that was reborn in Downing Street when the Conservatives won a big election victory last year.

But sources have suggested there has been tension in Johnson's Number 10 Downing Street office since the government's communications strategy was criticized by Conservative lawmakers for being slow and confusing during the coronavirus crisis.

"After careful consideration I have this evening resigned as No 10 director of communications and will leave the post at the end of the year," Cain said in a statement. "It has been a privilege to work as an adviser for Mr Johnson for the last three years – being part of a team that helped him win the Tory leadership contest, secure the largest Conservative majority for three decades – and it was an honor to be asked to serve as the Prime Minister's Chief of Staff."

Johnson described Cain "as a true ally and friend", thanking him in a statement for his "extraordinary service."

The BBC said the prime minister's official spokesman, James Slack, would take over as Johnson's director of communications at the end of the year.

Some commentators said Cain had been forced out of Downing Street after a restructuring which saw journalist-turned-government adviser Allegra Stratton appointed last month to front the prime minister's new daily televised media briefings.

They suggested Cummings, seen as the driving force behind Johnson's agenda on anything from Brexit and his domestic policy agenda to reforming government bureaucracy, could also resign in protest.

Cain, alongside Cummings, was one of a few in Downing Street who helped drive the prime minister's Brexit agenda, a cheerleader for Johnson's hardline stance to "get Brexit done" and "take back control" to restore sovereignty to Britain.

But his sometimes pugnacious style could alienate others. Some lawmakers in the governing party accuse him and Cummings of running Downing Street like a campaign bunker, willfully ignoring the parliamentary party when making decisions.