The major oil spill caused by a Japanese ship that ran aground in Mauritius may pose a long-term threat to the region's ecology, including to the Indian Ocean island's delicate mangroves, Japanese experts said Tuesday. 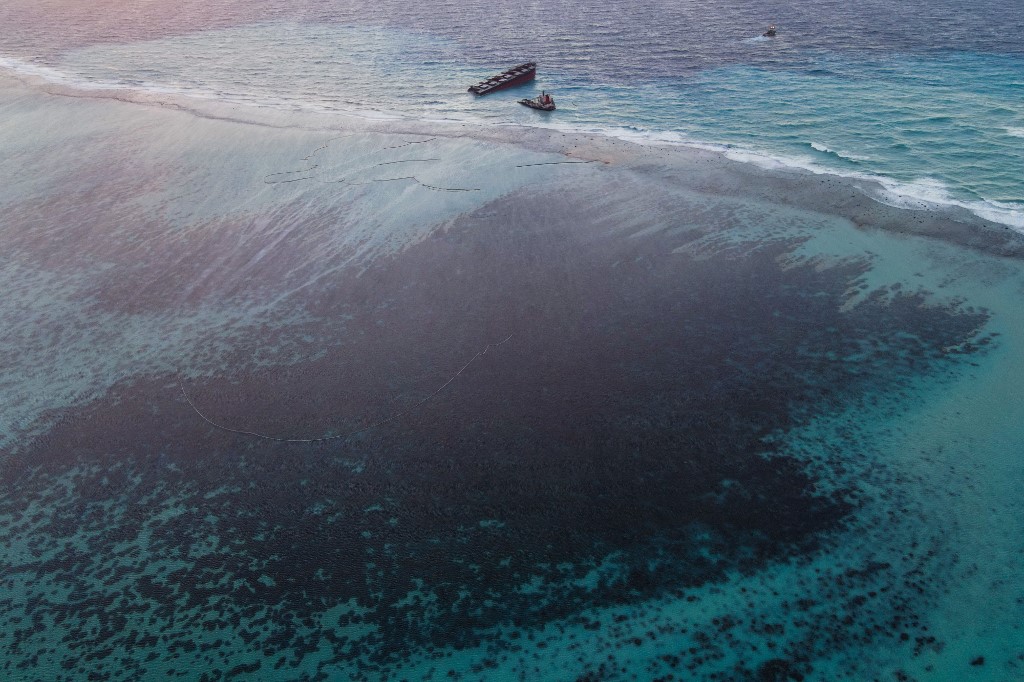 An aerial view taken in Mauritius on August 17, 2020, shows the MV Wakashio bulk carrier, belonging to a Japanese company but Panamanian-flagged, that had run aground and broke into two parts near Blue Bay Marine Park. (Photo: AFP)

The bulk carrier MV Wakashio crashed into a reef last month spewing more than 1,000 tonnes of oil into pristine waters that are home to mangrove forests and endangered species.

After the boat split in two, the larger piece was towed out to sea and sunk, but the smaller section remains stranded on the reef.

Japanese experts and officials in Mauritius said they had surveyed a dozen marine spots about 800 metres (yards) northwest of the wreck, and found no major damage, nor any sign of oil on the ocean bottom or on the coral reef.

But they said the remaining wreck appeared to be grinding against the reef as waves push it back and forth.

"If this situation continues, it could cause stress to the corals and could kill them," said Noriaki Sakaguchi, an ecosystems expert with Japan International Cooperation Agency.

He said efforts to remove sediment could harm the coral, which is also being damaged by ropes holding oil fences set up to stop the spill reaching shore. Removing the remaining wreckage appears to be the only solution to the problem, the team said.

The spilled oil has also reached the soft soil of mangrove forests along the coastline.

While there is no evidence of mangrove death yet, the oil could kill plants in the protected area in coming months, the team warned.

Mangrove clean-up is extremely complicated because human activity in the area risks driving oil deeper into the soil where it could cause more harm.

For now, cleanup efforts are focused on picking up seagrass and other plants that wash through oil-covered areas and end up on the shore.

The team called for long-term monitoring of the area after the accident, which is still under investigation by Mauritian authorities.

Japan's Kyodo News said Monday that crew on the ship had steered it close to shore because they wanted to find a mobile signal so they could contact family and ask about the coronavirus situation at home.

It cited an unnamed judicial source, who also said an alcohol-fuelled birthday party had been held on board before the accident, though it was not clear if on-duty crew participated.