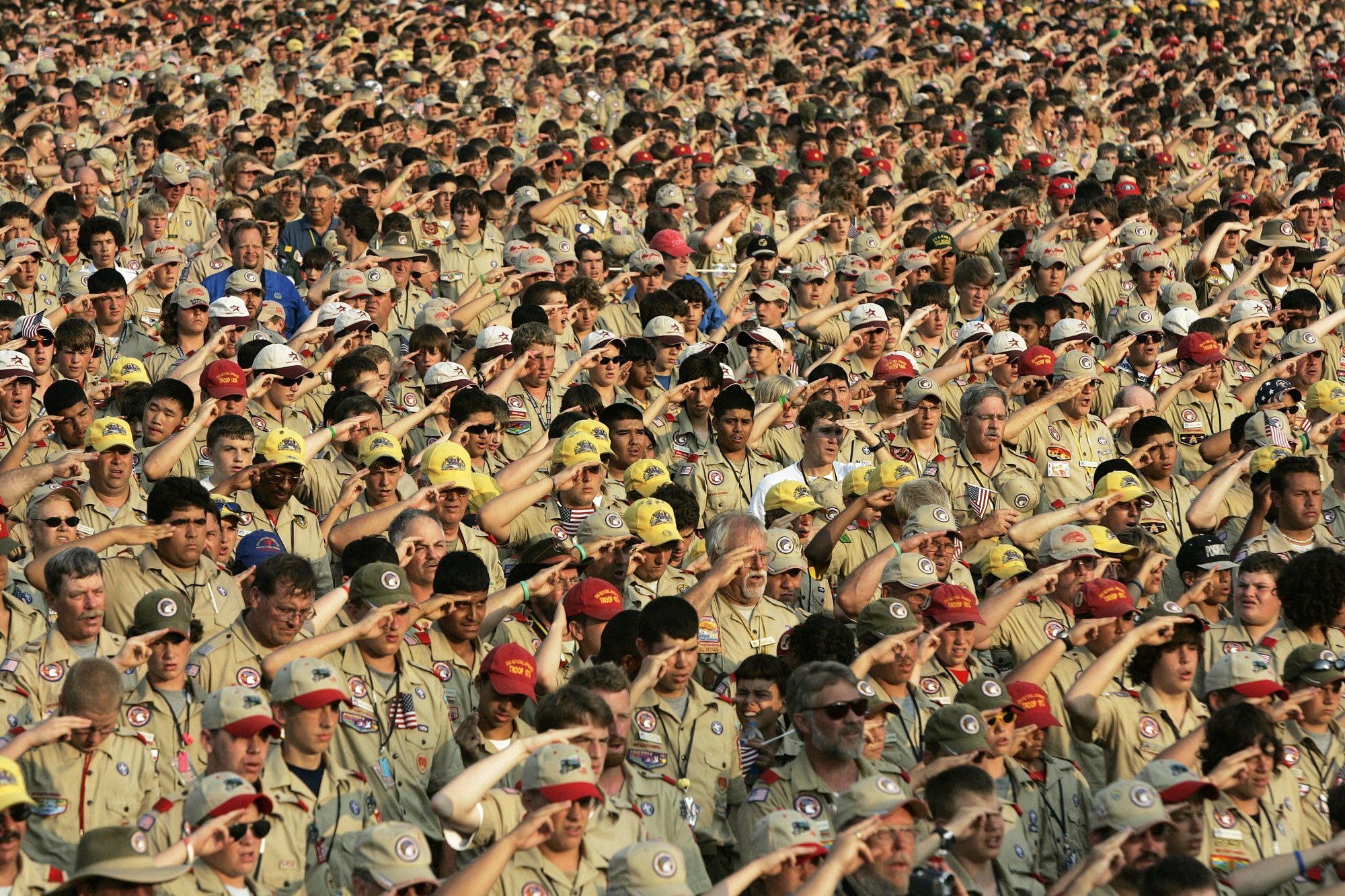 Boy Scouts salute as they recite the Pledge of Allegiance during the Boy Scout Jamboree in Bowling Green, Va. on July 31, 2005. (Photo: AP)

The lawyers’ ads on the internet aggressively seeking clients to file sexual abuse lawsuits give a taste of what lies ahead this year for the Boy Scouts of America: potentially the most fateful chapter in its 109-year history.

Sexual abuse settlements have already strained the Boy Scouts’ finances to the point where the organization is exploring “all available options,” including Chapter 11 bankruptcy. But now the financial threats have intensified.

The reason: States have been moving in recent months to adjust their statute-of-limitations laws so that victims of long-ago sexual abuse can sue for damages. New York state has passed a law that will allow such lawsuits starting in August. A similar bill in New Jersey has reached the governor’s desk. Bills also are pending in Pennsylvania and California.

In New York and elsewhere, lawyers are hard at work recruiting clients to sue the Boy Scouts, alleging they were molested as youths by scoutmasters or other volunteers.

Plaintiffs’ lawyers “recognize that this is a very unique and lucrative opportunity,” said attorney Karen Bitar, who formerly handled sex-crime cases as a prosecutor in Brooklyn before going into private practice.

Attorney Tim Kosnoff, a veteran of major sexual abuse lawsuits against the Roman Catholic Church, said Tuesday that he and his team have signed up 186 clients from dozens of states in just the past few weeks who want to be part of litigation against the Boy Scouts. Kosnoff said 166 of them identified alleged abusers who have not been named in any of the Boy Scout files made public in past years.

A bankruptcy by the Boy Scouts could be unprecedented in its complexity, potentially involving plaintiffs in virtually every state, according to several lawyers. It would be national in scope, unlike the various Catholic Church bankruptcy cases in the US, which have unfolded diocese by diocese.

“A Boy Scout bankruptcy would be bigger in scale than any other sex abuse bankruptcy,” said Seattle-based attorney Mike Pfau, whose firm is representing more than 300 victims in New York state.

Jeffrey Schwartz, a New York-based bankruptcy expert with the firm McKool Smith, said the Boy Scouts don’t have a particularly large flow of cash and might be forced to sell off property in bankruptcy. The Boy Scouts have extensive land holdings, including camping and hiking terrain.

“They’ll play for time,” Schwarz said. “If their defense costs and settlement costs are greater than their membership fees, it could be a death spiral.”

“It can be a tool that these institutions use to shield assets and avoid having to reveal some information,” she said. “In many ways, it’s a disservice to victims.”

Illustrating the depth of its problems, the Boy Scouts filed lawsuits last year against six of its own insurers, saying they have improperly refused to cover some of the sex abuse liabilities incurred by the organization. The insurers say the coverage obligation is voided because the Boy Scouts failed to take effective preventive measures such as warning parents that scouts might be abused. The suits are still pending.

The intensifying pressures on the Boy Scouts coincide with the mounting threats to the US Catholic Church in regard to its own long-running sex abuse scandal. Catholic bishops will be meeting in Baltimore in June to discuss the next steps.

Both the church and the Boy Scouts are iconic, historically well-respected institutions now known as having been magnets for pedophiles trying to exploit the trust of boys and their parents.

“When you cloak people in badges of respect, you create the perfect opportunity for bad people to get access to children,” said Chris Hurley, whose Chicago law firm is representing 11 former scouts in sex abuse trials scheduled on a monthly basis this year.

Another common denominator for the Catholic Church and Boy Scouts: Both kept voluminous secret files with names of suspected abusers, yet balked at sharing the information with the public.

Since the 1920s, the Boy Scouts have been compiling “ineligible files,” which list adult volunteers considered to pose a risk of child molestation. About 5,000 of these files have been made public as a result of court action; others remain confidential, although Delimarkos said the Boy Scouts notify law enforcement in every case of suspected abuse.

Minnesota-based attorney Jeff Anderson, who had led many lawsuits against the Catholic Church, released a court deposition in New York on Tuesday in which an expert hired by the Boy Scouts said she tallied 7,819 individuals in the “ineligible files” as of January.

Some of the files were ordered released after a 2010 sexual abuse case in Portland, Oregon, that led to a nearly $20 million judgment against the Boy Scouts on behalf of a man molested by a Scout leader in the 1980s.

Paul Mones, the plaintiff’s lawyer in that case, said there are no overall figures on Boy Scout abuse settlements because the details are kept confidential.

Both the Boy Scouts and the Catholic Church say they now have policies in place to sharply curtail abuse that abounded in past decades. In the Boy Scouts ′ case, the steps included requiring criminal background checks for all staff and volunteers, and requiring two or more adult leaders be present with youth at all times during scouting activities.