Louisiana's Democratic governor signed a ban on abortion as early as six weeks of pregnancy Thursday, a move that puts him squarely in line with the leaders of other conservative Southern states while provoking anger from members of his own party. 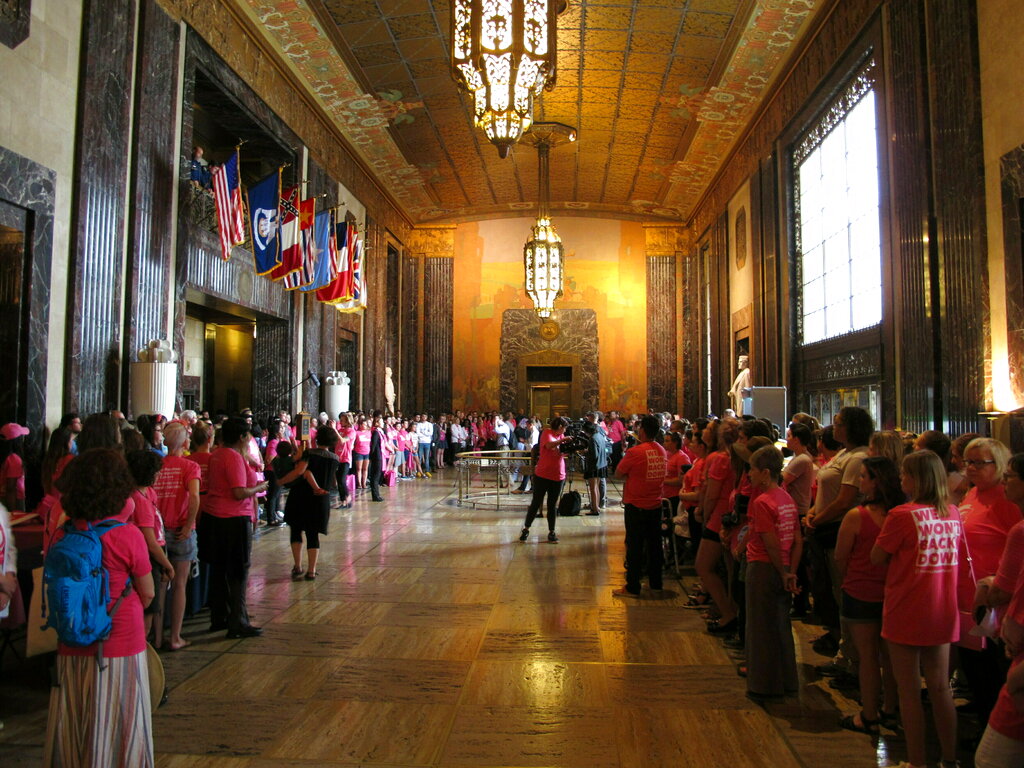 Planned Parenthood protesters hold a "stand-in" at the Louisiana Capitol, in opposition to legislative passage of a bill that would ban abortion as early as six weeks of pregnancy, on Thursday, May 30, 2019, in Baton Rouge, La. (Photo: AP)

The bill's signing, however, won't limit the state's three abortion clinics anytime soon. Louisiana's law takes effect only if the law in neighboring Mississippi, which was recently blocked by a judge , is upheld by a federal appeals court.

Edwards, a Catholic running for reelection this year, didn't hold a public bill signing or issue a statement about it, instead announcing his action through his office. He had repeatedly said he intended to sign the measure, citing his faith and saying his views match those of the people in his conservative, religious state.

"This is an issue I've been consistent on forever. I am pro-life," he said earlier this month on his radio show, when asked about the bill.

Louisiana legislators overwhelmingly supported the ban , with a 79-23 House vote and 31-5 Senate vote.

Lawmakers in conservative states across the nation are striking at the US Supreme Court's 1973 Roe v. Wade decision that legalized abortion nationally. Abortion opponents are pushing new restrictions on the procedure in hopes that a case will make its way to the high court and two new conservative justices appointed by President Donald Trump could help overturn Roe.

None of the abortion bans enacted this year has taken effect, and all are expected to face legal challenges that will delay any enforcement of the prohibitions against the procedure.

Opponents of the so-called heartbeat bills said they would effectively eliminate abortion as an option before many women realize they are pregnant and would violate constitutional privacy protections. Several hundred pink-clad Planned Parenthood supporters filled the Louisiana Capitol to protest the ban ahead of Thursday's bill signing.

"The unprecedented and extreme attacks on abortion we're seeing across the country, including here in Louisiana, are dangerous to patient health and wellbeing," Petrice Sams-Abiodun, with Planned Parenthood Gulf Coast, said in a statement.

Louisiana's law includes an exception from the abortion ban to prevent the pregnant woman's death or "a serious risk of the substantial and irreversible impairment of a major bodily function" — or if the pregnancy is deemed "medically futile." But it does not include an exception for a pregnancy caused by rape or incest, drawing criticism that the law forces continued trauma on women who have been victimized.

Under the bill, a doctor who violates the prohibition could face a prison sentence of up to two years, along with medical license revocation.

The abortion-rights debates that divide state Capitols across the nation cause fewer ripples in the Louisiana Legislature. It is one of the country's most staunchly anti-abortion states, with a law on the books that immediately outlaws abortion if Roe v. Wade is ever overturned.

Louisiana's latest abortion ban won support from many Democrats and was sponsored by Democratic Sen. John Milkovich. And the governor won some GOP praise for his position.

"While Gov. Edwards and I disagree on a lot of things, I'm proud that he stands for life," Republican Rep. Julie Emerson said.

Although Edwards is a rarity in the national Democratic Party, he ran as an anti-abortion candidate. In his 2015 campaign, Edwards had a prominent TV ad that showed his wife, Donna, describing being advised to have an abortion because of their daughter's spinal birth defect. The Edwardses refused, and the ad showed a grown-up Samantha.

The bill signing by Edwards, who faces two Republicans on the ballot this fall, is expected to help shore up his position with some voters at home, even if it puts him at odds with national Democratic Party leaders and donors.

Still, the governor faced an outcry of anger on social media from Democrats who objected to his support for the abortion ban.

The chair of Louisiana's Democratic Party, Sen. Karen Carter Peterson, has been regularly slamming the bill. She's posted opposition messages on Twitter, including after the bill signing: "Embarrassing! Apologies to LA women, particularly for the disrespect to women victimized by rape or incest." But she hasn't directly criticized Edwards by name, and the party is supporting him for reelection.