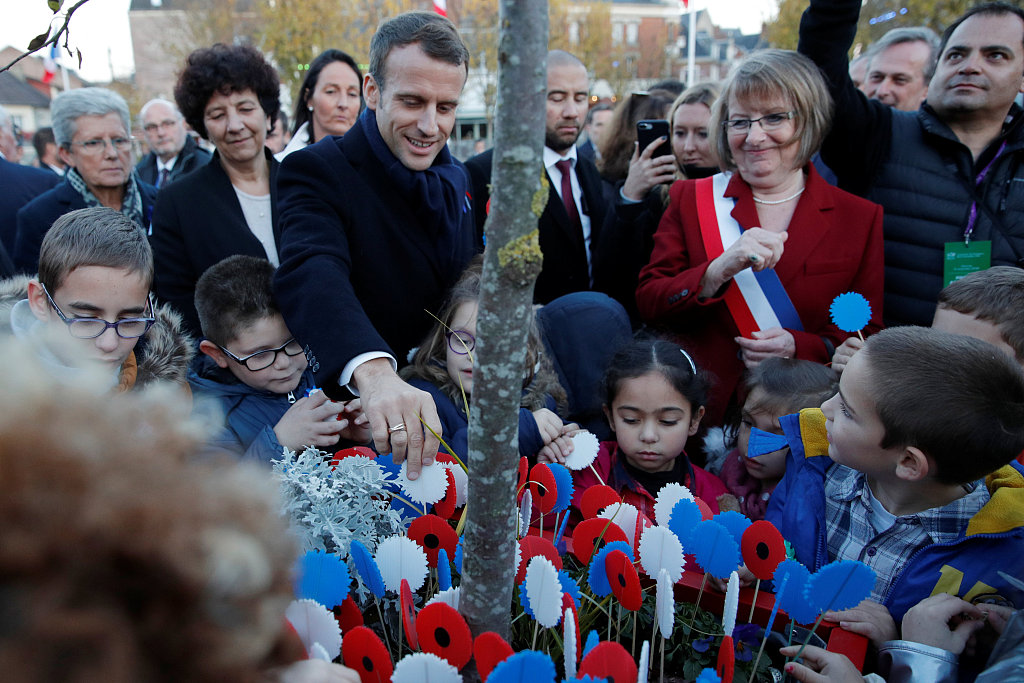 President Emmanuel Macron of France Chancellor Angela Merkel of Germany on Saturday unveiled a plaque to their countries' reconciliation in the forest clearing in France where the armistice ending World War I was signed.

In a highly symbolic ceremony, Macron and Merkel met at the site near Compiegne in eastern France where Germany officially surrendered at dawn on November 11, 1918, bringing to a close more than four years of slaughter on the Western front.

It was the first time a German leader had visited the site since World War II.

The visit underscored the close ties between two countries that fought three wars between 1870 and 1945 but are now seen as the lynchpins of peace in Western Europe.

Macron, sporting a cornflower in his lapel -- the French equivalent to Britain's remembrance poppy -- and Merkel reviewed grey-clad soldiers from the Franco-German brigade, part of the Eurocorps, before standing elbow-to-elbow at the centre of the clearing for the ceremony.

"On the centenary of the November 11, 1918 armistice, Mr Emmanuel Macron, president of the French Republic, and Mrs Angela Merkel, Chancellor of the federal Republic of Germany, here reaffirmed the value of Franco-German reconciliation in the service of Europe and peace," read the plaque.

It was laid next to another plaque dating back to World War 1, which reads: "The criminal pride of the German empire died here on November 11, 1918, vanquished by the free people it had sought to enslave."

The open-air site at Rhetondes is doubly symbolic as Adolf Hitler chose the same spot to sign the surrender of the French on June 22, 1940 at the start of World War II.

Germany insisted that the railway carriage in which the WWI armistice was signed be brought out of a museum and returned to Rhetondes for the ceremony. It was destroyed during the war and a replica now stands at the site.

Macron and Merkel are due to travel to Paris where some 70 world leaders will gather Sunday to mark the 100th anniversary of the end of the war at the tomb of the Unknown Soldier under the Arc de Triomphe.