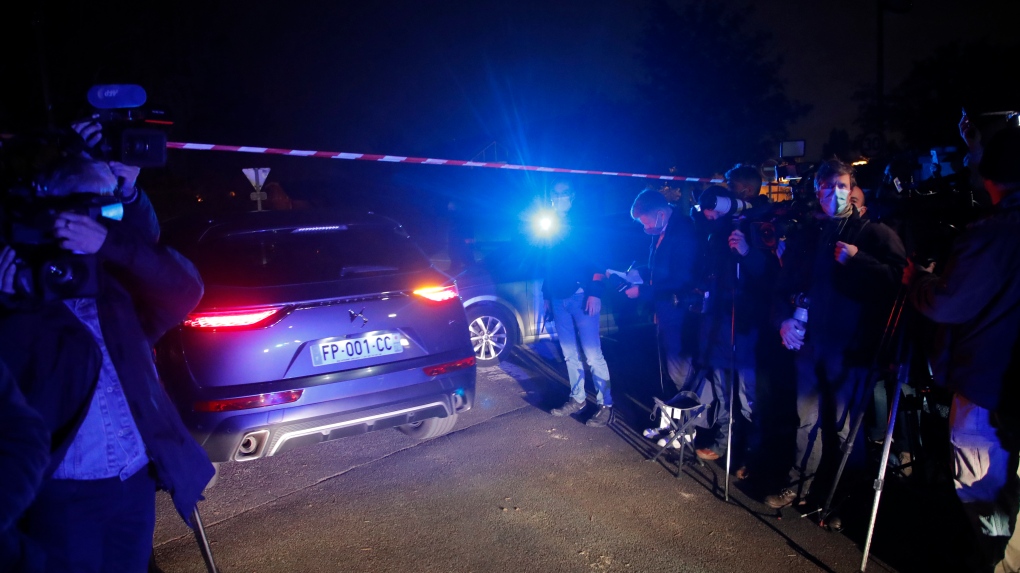 A police car enters the perimeter after a history teacher who opened a discussion with students on caricatures of Islam's Prophet Muhammad was decapitated, Friday, Oct. 16, 2020 in Conflans-Saint-Honorine, north of Paris. (Photo: AP)

PARIS, Oct. 16 (Xinhua) -- Condemning the "Islamic terrorist attack" that took the life of a teacher in Paris northwest suburbs, French President Emmanuel Macron on Friday evening called on the French to stand together and pledged quick and firm action by the government to combat terrorism.

"One of our fellow citizens was murdered today because he was teaching students freedom of expression," Macron told the press after visiting the middle school in Conflans-Sainte-Honorine hours after the attack struck.

"It is a teacher that this terrorist killed because he wanted to destroy the Republic...destroy the possibility of making our children free citizens," he added.

Macron stressed that terrorists will not divide France and obscurantism will not win.

According to local media, the victim is a 47-year-old history teacher who had reportedly shown in his class cartoons of Prophet Mohammad, which are considered by Muslims as blasphemous, and was decapitated by a knifeman.

The suspected attacker was believed to be an 18-year-old unknown to the police. He was spotted by patrol police in an adjacent commune carrying a knife. He reportedly shouted "Allahu Akbar", or "God is Greatest", before the attack.

Officers shot him dead after he menaced them and refused to surrender, local media reported.

The attack triggered a deluge of denunciation as well as calls for unity and more acts to uproot radical Islamism.

"Tonight, it is the Republic that is under attack with the despicable assassination of one of its servants, a teacher," Education Minister Jean-Michel Blanquer tweeted.

"Unity and firmness are the only answers to the monstrosity of Islamist terrorism," he added.

In a Twitter message, ex-president Francois Hollande denounced "a terrible assassination of a teacher."

Hollande, who saw France rocked by its deadliest terrorist attacks in 2015, stressed that "more than ever, we must be united in the face of barbarism and obscurantism."

Last month, a man stabbed two people outside the former offices in central Paris of satirical weekly magazine Charlie Hebdo, which publishes controversial cartoons, including those of Prophet Muhammad.

The offices were the scene of an attack in January 2015 that saw 12 people killed, including many of the magazine's staff. Fourteen people are currently on trial over the attack.

On Nov. 13, 2015, a series of terrorist attacks hit Paris and the city's northern suburb. Some 130 people were killed in several mass shootings and suicide bombings.

Earlier in August, Minister of the Interior Gerald Darmanin said that the risk of terror attacks in France remains extremely high, adding that 8,132 individuals had been registered on a national warning list of Islamist radicalisation.