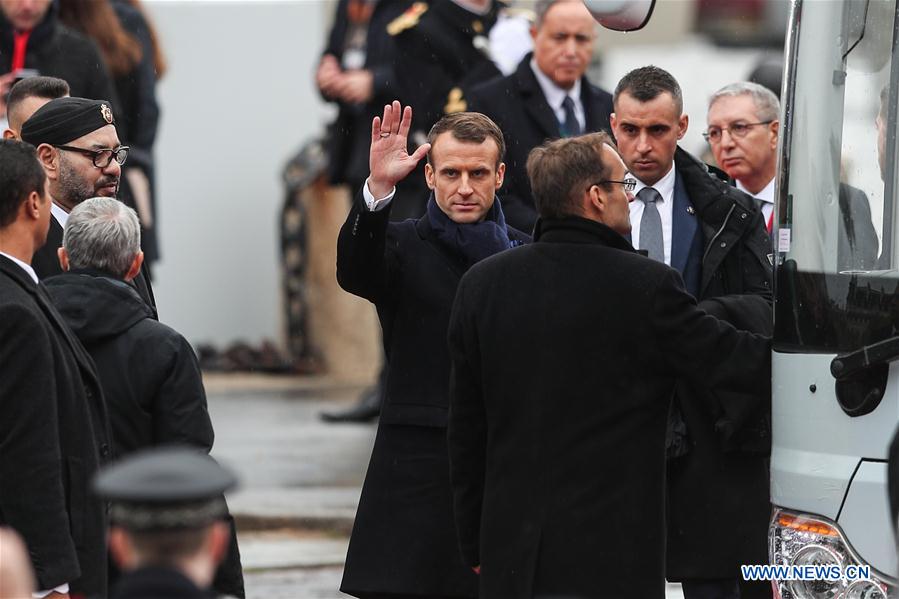 French President Emmanuel Macron waves after the ceremony to commemorate the 100th anniversary of the end of World War I in Paris, France, Nov. 11, 2018. (Xinhua/Zheng Huansong)

PARIS, Nov.12 (Xinhua) -- In a declaration published at the end of the first day of the Paris Peace Forum, French President Emmanuel Macron and head figures from international organizations appealed to "promote a rules-based international order."

"International organizations continue to offer a platform on which member states, regional institutions and organizations, cities and civil society can evoke potential solutions to global problems that each state could not resolve alone. Collaboration on a multilateral level is not optional: it's the only solution possible," pleaded the signatories.

"If we want to achieve lasting peace and sustainable development, we must invest ourselves in strong collective action and improve our collaboration and our partnerships, especially with the world of business, social partners, financial institutions, civil society and regional and sub-regional organizations," they wrote.

"The credibility of the multilateral system comes through a high level of coordination between international organizations and through their ability to reform themselves and respect their missions, with member states providing the political support and appropriate resources necessary for their work," they added.

The inaugural edition of the Paris Peace Forum, organized in the framework of centenary commemorations of the end of the First World War, is bringing together the representatives of 84 countries and international organizations for three days in the French capital. U.S. President Donald Trump is not participating.