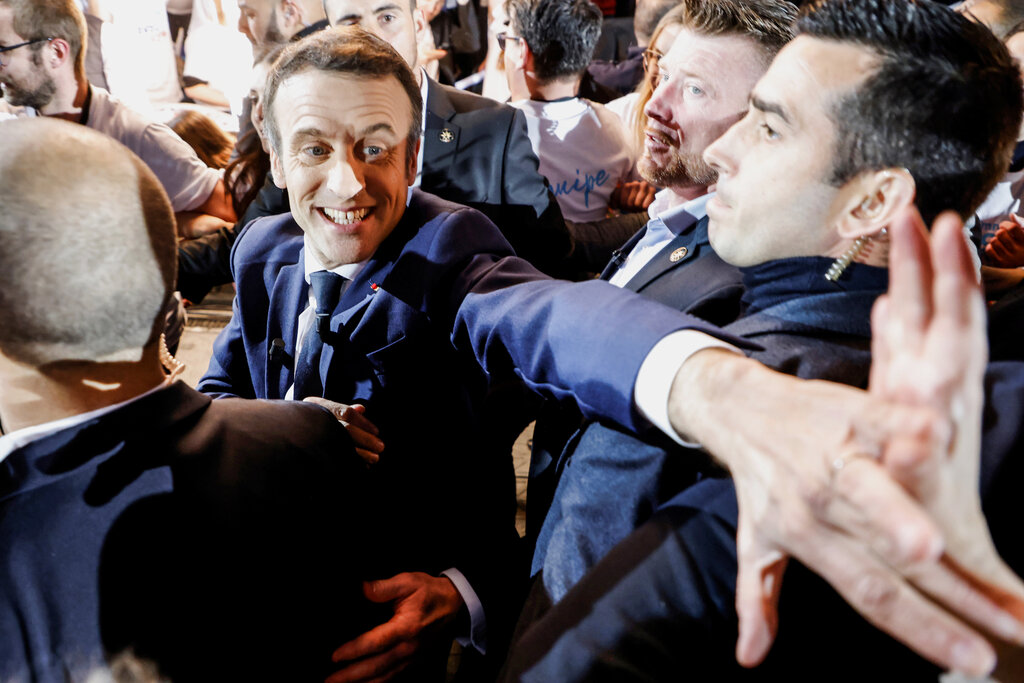 French President Emmanuel Macron and centrist candidate for reelection shakes hands with supporters as he arrives for a meeting in Paris, on April 2, 2022. (Photo: AP)

President Emmanuel Macron is the clear favorite in France's presidential race Sunday yet a big unknown factor may prove decisive: an unprecedented proportion of people say they are unsure who to vote for or don’t intend to vote at all, bringing a large dose of uncertainty to the election.

The pro-European centrist is still comfortably leading in the polls. His main challenger, far-right leader Marine Le Pen, appears on the rise in recent days. Both are in good position to reach the presidential runoff on April 24, which would make them replay the 2017 election that Macron won handily.

There’s “no certainty,” Macron warned during his first big rally on Saturday near Paris.

“Don’t believe in polls or commentators who would sound definitive and tell you that ... the election is already done, that everything is going to be all right,” he told his supporters. “From Brexit to so many elections, what seems unlikely can happen!”

Scenarios for the this year's second round vote show that Le Pen has significantly narrowed the gap with Macron compared to 2017 —when she lost with 34% support to his 66%.

Polls still place her behind Macron, but much closer, apparently showing the wisdom of her longstanding strategy to soften her rhetoric and image — allowing her to capture the anti-Macron vote as well as far-right support.

Many in Macron’s camp fear that his supporters may not go to polling stations because they already think he will win, while those angry at his policies will make sure to vote.

“Of course I have concerns,” said Julien Descamps, a 28-year-old member of Macron's party, stressing that some people in his entourage “don't know what to do.”

“They are not fully convinced by Macron, but if they reject the extremes, they should vote for him,” he said.

Macron called on voters to get mobilized against both France's far-right and the far-left. “Don’t boo at them, fight their ideas,” he said.

In third position according to the polls is far-left figure Jean-Luc Mélenchon, who has increased his support but still is a distance behind Le Pen. Another far-right candidate, Eric Zemmour, and conservative contender Valérie Pécresse are amid other key challengers. Sunday’s first round will qualify the two top candidates for the runoff.

The presidential election is the one that is attracting French voters the most.

Yet the turnout has decreased from 84% in 2007 to about 78% in 2017, and studies show that abstention may be higher than five years ago. In particular, young and working-class people appear less certain to go to the polls than retirees and upper-class voters.

A low turnout could have a major impact on the vote, pollsters say. They note that a greater proportion of people don’t know yet for whom they will vote — or whether they will vote at all.

That's the situation of managing assistant Liza Garnier, 45, who lives in the wealthy suburb of Montmorency, north of Paris.

“I don’t believe in what politicians say anymore. They make a lot of promises, they say candidates’ words, and once in power, we are disappointed,” she said. “I get the impression that more and more people think it’s useless: voting for who? For what?”

Garnier feels politicians are too far away from the reality of French daily life. She said she may just pick a blank vote, even in the second round if Macron is facing Le Pen.

The sinking purchasing power of French families is one of voters’ top concerns amid rising food and energy prices, along with social payments, security, immigration and the environment. But many feel these issues have not been addressed as much as they should in this year's campaign, partly because the war in Ukraine is overshadowing all other issues.

Kevin, a 26-year-old history and geography teacher in a public middle school who has worked in an impoverished suburb north of Paris, deplored a lack of political debate in this campaign. Describing himself as a “leftist,” he said he feels “very disillusioned” by the current French political scene.

Kevin, who cannot be identified by his last name because state employees are required to be neutral ahead of elections, said he is still hesitating. But in any case, he won’t vote for Macron or Le Pen, and considers a blank vote an option.

Macron, who has dedicated most of his time recently to diplomatic talks trying to end the war in Ukraine, is seeking to boost his short campaign ahead of Sunday's vote, giving several interviews in the French media and putting campaign activities on his agenda almost each day.