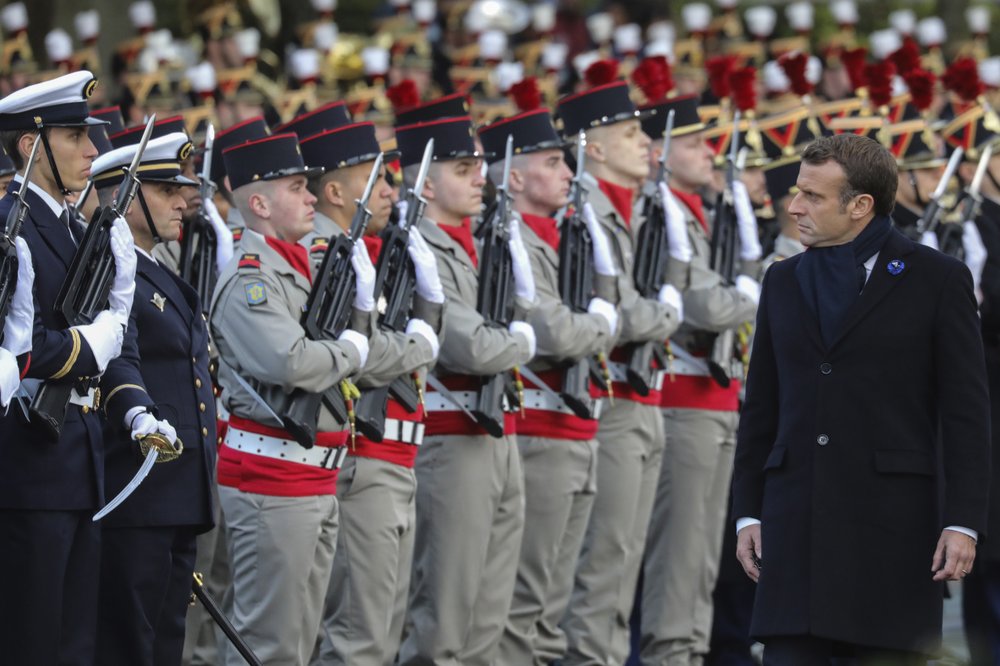 Greeted by Prime Minister Edouard Philippe, Macron laid a wreath and inspected troops during the ceremony celebrating 101 years since the Armistice that ended the slaughter of World War I.

Music from a military brass band was slightly muffled by persistent rain for the hundreds of spectators — including former French Presidents Francois Hollande and Nicolas Sarkozy — thronging the Champs Elysees avenue. Some waved French flags.

Macron later inaugurated a bronze sculpture and a memorial wall in the Andre-Citroën park, as a monument to the 549 French soldiers who died in foreign operations since 1963. They died in 17 theaters of conflict including 141 in Lebanon, 129 in Chad, 85 in Afghanistan and 78 in the former Yugoslavia.

“On this wall, in stone, we have engraved your memory,” a solemn Macron said.

The Royal British Legion urged the nation to remember the 100th anniversary of the first two-minute silence observed on Armistice Day by shutting out modern technology and all distractions.

“This year we’re asking the nation to pause — mute your phone, close your laptop, switch off the telly — for just two minutes and pay your respects to our Armed Forces community, past and present,” the legion said on its website.

A lone musician at the National Memorial Arboretum played “The Last Post,” as silence fell. People at ceremonies across the country bowed their heads in respect.

In a short break from campaigning for the Dec. 12 elections, Prime Minister Boris Johnson laid a wreath during a service at St Peter’s Square, Wolverhampton while Labour Party leader Jeremy Corbyn attended a ceremony outside Islington Town Hall, north London.

Britain’s largest ceremony took place on Sunday . The event in central London is traditionally held on the closest Sunday to the anniversary of the end of World War I at 11 a.m. on Nov. 11, 1918.

Queen Elizabeth II led the nation in remembering the war dead. The queen, dressed in black, watched from a balcony as her son and heir Prince Charles laid a wreath of scarlet poppies on the Cenotaph war memorial near Parliament.

The 93-year-old monarch, who served as an army mechanic during World War II, performed the wreath-laying herself for most of her 67-year reign but has cut back on her public duties.