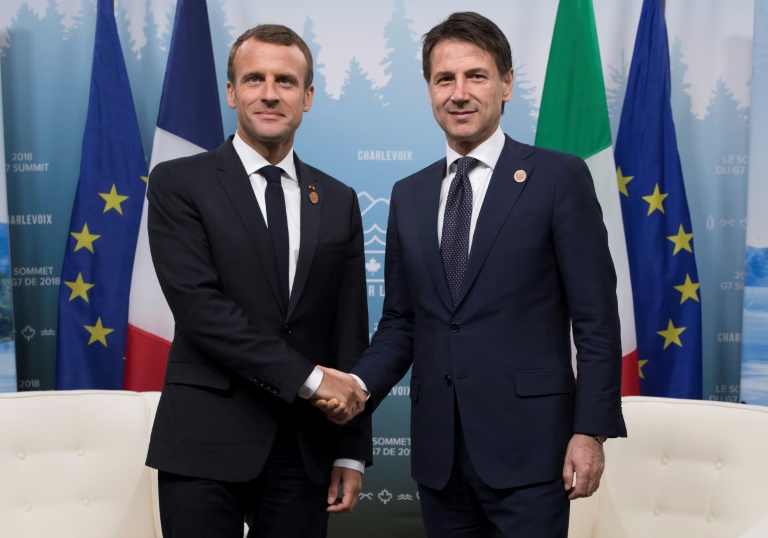 French President Emmanuel Macron and Italian Prime Minister Guiseppe Conte will meet for talks over lunch on Friday after tensions eased between the two countries.(Photo: AFP)

French President Emmanuel Macron sought to resolve tensions with Italy on Thursday, saying he never meant to cause offence by criticising its rejection of a migrant ship in remarks that sparked fury in Rome.

Macron had on Tuesday ignited the worst Franco-Italian diplomatic spat in years by accusing Rome of "cynicism and irresponsibility" for refusing to take in 629 migrants left stranded on a rescue ship that was eventually welcomed by Spain.

Rome summoned the French ambassador and cancelled a meeting between the countries' economy ministers while threatening to call off talks between Macron and Italian premier Giuseppe Conte in Paris on Friday unless France issued an "official apology".

But the tensions appeared to have ebbed after a telephone call Wednesday night between Macron and Conte.

"The president stressed that none of his comments were intended to offend Italy and the Italian people," Macron's office said in a statement, adding that Friday's lunch meeting with Conte would go ahead as planned.

Conte told reporters in Rome that the exchange was "very cordial".

Asked whether he thought the dispute was over, he said: "I very much think so, yes.

"But now we need to work on reform of the Dublin Agreement," he added in reference to controversial EU rules which require migrants to apply for asylum in the country where they first arrive.

That has put pressure on Italy and Greece, the main entry points for people fleeing war and poverty in the Middle East, Africa and Asia.

The confirmation of Conte's Paris visit came minutes after Italy's deputy prime minister Luigi Di Maio said Rome would "not back down" without a French apology.

"The day when people thought they could make a mockery of Italy is over," Di Maio, leader of the Five Star Movement that shares power with the far-right League, was quoted by the Agi news agency as saying.

'Axis of the willing'

The plight of the Aquarius rescue ship -- which is en route to Spain -- has again shone a light on the failure of EU members to band together in the face of an unprecedented influx of migrants across the Mediterranean since 2015.

An EU scheme to distribute migrants equitably around the bloc has failed miserably, with central European members flatly refusing the quotas and others, including France, falling far short of their allocated target.

Charities have sounded the alarm over the toll the crisis is taking on migrant lives.

On Thursday, four people were given 25-year jail sentences in Hungary over the gruesome deaths of 71 migrants who suffocated in a truck on an Austrian highway three years ago.

Chancellor Sebastian Kurz of neighbouring Austria this week hailed the hardline stance on immigration taken by the interior ministers of his country, Italy and Germany -- whose interior minister is openly feuding with Chancellor Angela Merkel on the issue.

"We believe an axis of the willing is needed to fight illegal migration," he said.

Many West Africans try to continue on to France, where they speak the language and often have relatives, only to find the border shut to them.

Thousands of those who manage to sneak across the Alps have been detained and sent back to Italy.

In a swipe at France, Italy's government said it will not accept "hypocritical lessons from countries that have preferred to look the other way on immigration".

'Europe must do more'

Macron, in his call with Conte, called for closer cooperation between Rome and Paris to try to check the migrant flows at their source -- currently mainly in Africa.

France had "always defended the need for greater European solidarity with the Italian people", he said.

The issue of how to share the migrant burden is expected to dominate an EU summit at the end of June.

While Italy has taken much of the flak over the Aquarius, Macron has come in for criticism at home -- for remaining silent for two days while the ship was adrift and then laying the blame solely at Italy's feet.

France, she added, had also taken the second-biggest share of migrants relocated from Greece and Italy.

"We're doing a lot but it's true: Europe must do more and must do better to help Italy," she said.