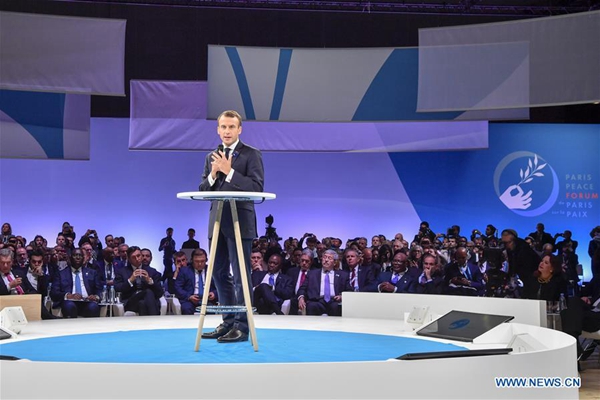 With the "yellow vest" social rebellion showing no sign of abating, French President Emmanuel Macron has proposed to build a "new contract" for the nation with which he hopes to "transform anger into solutions" and defuse the month-long street protests that had shaken his leadership.

In a long letter addressed to the French people and published by his office late on Sunday, Macron invited discontented people to participate in a three-month consultation, which he called "an unprecedented initiative", and of which he would "draw all the conclusions".

Widely criticized for his top-down governing style and "arrogance problem", Macron now called for an open debate with "no banned issue".

"We won't agree on everything, which is normal in a democracy. But at least we'll show we're a people which is not afraid of talking, exchanging, debating," the president wrote.

"However, we must ask ourselves questions to go further."

Accordingly, he raises a series of questions over taxes, green energy, institutional reform and citizenship -- the national debate's main themes to be discussed during meetings in town halls across French cities.

Struggling to win back his authority, the head of state expects the French themselves to come up with adequate alternative responses to their own complaints, which they had already expressed in "grievance books" opened up by mayors of 5,000 communes.

"Your proposals will therefore make it possible to build a new contract for the nation, to structure the action of the government and Parliament, but also France's positions at European and international level," he pledged.

The 41-year-old ex-investment banker stressed that the debate "is neither an election nor a referendum", telling the French "I have not forgotten that I was elected with a project, with major objectives to which I remain faithful.

"We will not go back on the measures we have taken to correct this in order to encourage investment and make work pay more," he stressed, referring to pro-business economic reforms, including the wealth tax, known as ISF.

"They have just been voted on and are just beginning to take effect. Parliament will assess them in a transparent manner," he said, as protests continue to mount against his policy, which critics say favors the rich.

With an eye on this spring's European election -- a crucial contest for the pro-European Macron to defend his political craftiness -- he is betting on the proposed three-month debate and face-to-face meetings with people to quell social unrest and help him regain the initiative.

He pledged to make the consultation's conclusions public within a month of the end of the debate on March 15.

However, doubts linger as to whether these conclusions would be directly translated into more participatory democracy to shape the government's policy as promised by Macron.

To Jean-Michel Aphatie, a political analyst, "Undoubtedly, it is a good debate ... but full of surprises.

"This debate was decided without much thought to respond to 'yellow vest' crisis. Emmanuel Macron decided to do it but has he measured all the implications, especially regarding his legitimacy to solve the crisis? It's not sure," he told the local broadcaster Europe1.

"Can he apply solutions that he does not believe in? No, it's stupid ... But does he have the means to refuse what could emerge from the majority following the debate?" he asked.

Macron, who came to power in May 2017 on promises of a new and fair recipe for the eurozone's leading power, has witnessed tough months marked mainly by the "yellow vest" movement, a nationwide protest against his way of governing, which started as a campaign against a surge in fuel prices and high living costs.

Despite capitulating over plans for fuel taxes and offering 10-billion-euro (11.46 billion U.S. dollars) concessions to improve the French people's daily life, the president is still struggling to defuse the anger.

The 9th weekend action in row lured more than 80,000 people on Saturday, a turnout higher than a week earlier.

One of the "yellow vest" representatives, Benjamin Cauchy, wrote on Twitter, "The letter (is about) a debate whose outcome is already known. Emmanuel Macron is letting us know this will serve no real purpose. What a lack of respect."

Speaking to BFMTV news channel, Jordan Bardella, head of the far-right National Rally's list for the European election, said "it's a lot for nothing."

"Emmanuel Macron is very disconnected from everyday realities. People are asking for more dignity, more democracy, fiscal peace and a significant decrease in taxes ... The French want an end to massive immigration. And again, Macron does not take that into account," he said.

In the northern French commune of Bourgtheroulde, Macron will officially kick off the national debate on Tuesday. This will be the first meeting of his planned tour of town halls around the country.

An Elabe poll, released last Wednesday, found that only 40 percent of citizens intend to take part in the debate.

Another poll conducted by Odoxa found that 70 percent of French people believed that the debate would not be useful.