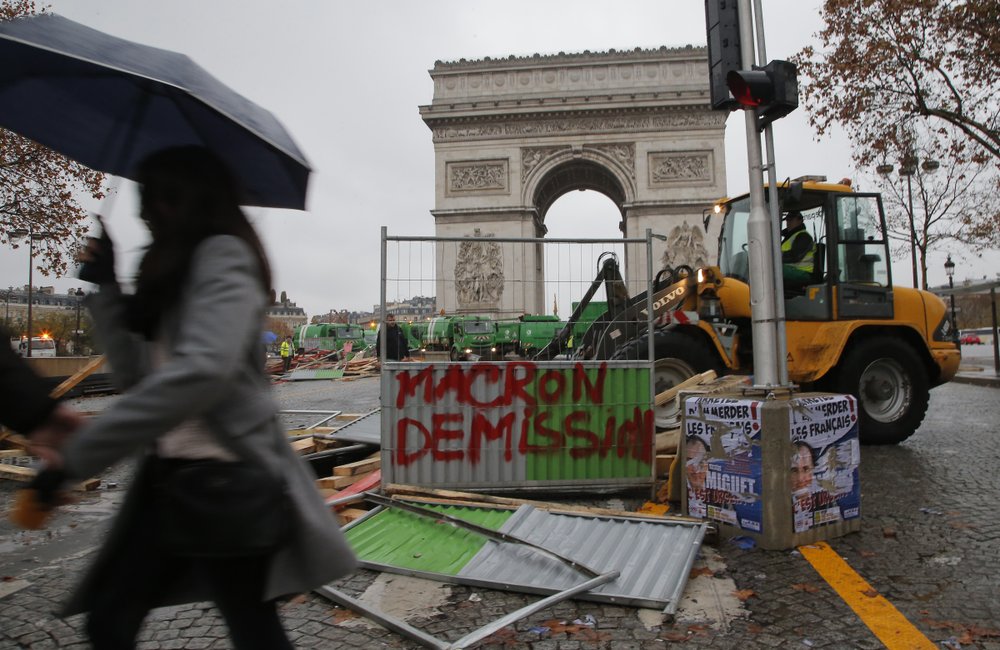 A bulldozer cleans the street from a barricade in the aftermath of a protest against the rising of fuel taxes in Paris, France on November 25, 2018. (Photo: AP)

French President Emmanuel Macron’s government vowed Monday an “uncompromising” stance toward troublemakers who use protests over rising fuel taxes to damage businesses and clash with police — including in the heart of Paris, on the glittering Champs-Elysees.

Pressure is mounting on Macron after a second weekend of sometimes violent demonstrations by angry drivers. He promised to explain on Tuesday his plans for weaning France off fossil fuels via small tax hikes that are at the heart of the protests.

The protests are a major challenge for Macron, drawing disparate demonstrators with no clear leader or mission but with a shared anger at his perceived elitism.

The government unveiled on Monday a planned bill to invest 13.4 billion euros ($15.2 billion) by 2022 aimed to develop the rail network, car-pooling, electric cars and unmanned shuttles.

The transportation minister, Elisabeth Borne, said that protesters’ anger is the consequence of “decades of abandonment of (rural) territories.” ″We’re not going to solve these difficulties just in one moment,” she said.

The protests dominated a Cabinet meeting Monday, notably the question of how to “respect the anger,” according to government spokesman Benjamin Griveaux. “At the same time, we must be uncompromising in the face of those who want to do damage.”

Finance minister Bruno Le Maire later said that images of Saturday’s violence on the Champs-Elysees are “a disaster” as the government is trying to make France the most attractive European country for investors.

A local protest leader in Toulouse, Benjamin Cauchy, said Monday on BFM television that the movement is at a turning point and the next step will hinge on what Macron has to say.

Cauchy said protesters should respect the media, after journalists were attacked, chased or threatened while covering Saturday’s events.

Finance Minister Bruno Le Maire is meeting later Monday with businesses hit by the protests on the Champs-Elysees and elsewhere.

Influential employers’ lobby Medef slammed the troublemakers and urged the government to help businesses hurt by the protests, notably in the tourism and retail sectors. In a statement released Monday, Medef asked the government to immediately activate its so-called “economic continuity unit,” used in crises, which allows for exceptional tax breaks or other aid for struggling businesses.

Paris police said 27 people are facing court Monday for Saturday’s violence in the capital, while twenty others arrested over the weekend were released.

Two people were killed and hundreds injured in accidents stemming from the protests since they kicked off Nov. 17, and hundreds of protesters and police have been injured.